This is only the second edition of “Minus the Pudding,” but already I find myself wondering if, instead of playing these games, I’d be better off playing with actual pudding. Actual pudding may not have the solid AI of the day’s top videogames, and it certainly has less replay value (ugh), but it is delicious, and it’s a lot more entertaining than most of the Xbox Live Indie Games I’ve been playing over the past several weeks.

For example, I played a game called Goblyn Stomp. Its name is apropos, which is a French word whose literal definition is “the absolute only thing that you do in Goblyn Stomp is stomp goblins.”  It’s kind of like the original Super Mario Bros., except that the only enemies in the game are Goombas, the entire game takes place on one screen, and seriously, all you ever do is stomp goblins.

I also played another game whose entire purpose, apparently, was to flash horrifying imagery at you from out of nowhere. As in, you’re wandering along a dark corridor and then BAM THERE’S AN ALBINO WITH BLOODY EYEBALLS MISSING HALF ITS FACE THROWING UP ON YOU.

At least, I assume that’s what the game’s entire purpose was—after peeing myself, I wasn’t really in the mood to play that game anymore, so I can’t tell you if it gets any better, or if it continues to be a total jump-out-at-you-athon.

It’s because of experiences like those that a little game called Office DisOrders was a total godsend for me. Office DisOrders changed my life, inasmuch as it reminded me that it’s not completely impossible for these Indie Games to be anything but a waste of hard drive space—it reminded me that, very occasionally, you can get your dollar’s worth from them, and then some.

But more on that later. First, I’m going to talk about some of the other games I had to slog through before discovering Office DisOrders. Enjoy! 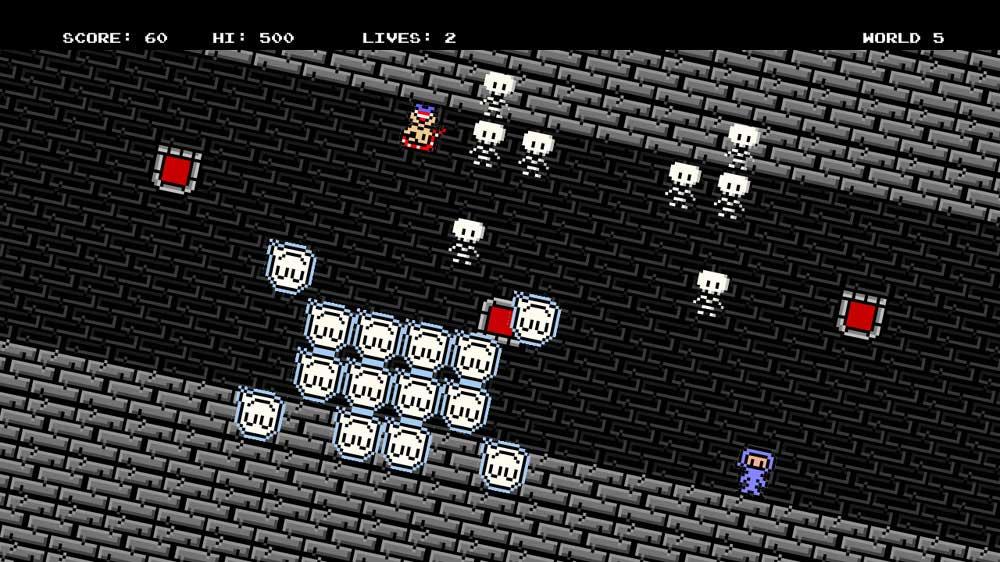 Pirate and Ninja—mortal enemies, owing to the fact that Ninja simply cannot accept Pirate’s clear and total supremacy in every way—team up in this game to bring disappointment to the masses.

The graphics and music of Pixel Whirled will appeal to fans of Mega Man 9 and other new-age retro videogames—in fact, the entire reason I decided to check this game out was its awesome faux coverart. The gameplay, unfortunately, will only appeal to those few gamers who often think that, gosh, the one thing keeping our world from reaching a state of utopia is the total lack of Space Invaders clones; MORE SPACE INVADERS, PLEASE!

In this game, you shoot bullets out of your head until all the monsters are gone. Then you flip the screen over, and you shoot ninja stars out of your head until all the other monsters are gone. That’s pretty much it. There’s no 2D side-scrolling, two-by-four-swinging, president-saving beat ’em up action like the coverart implies; it’s seriously just Space Invaders with killer apples. Not even Pirate can save this one from Yawnsville. 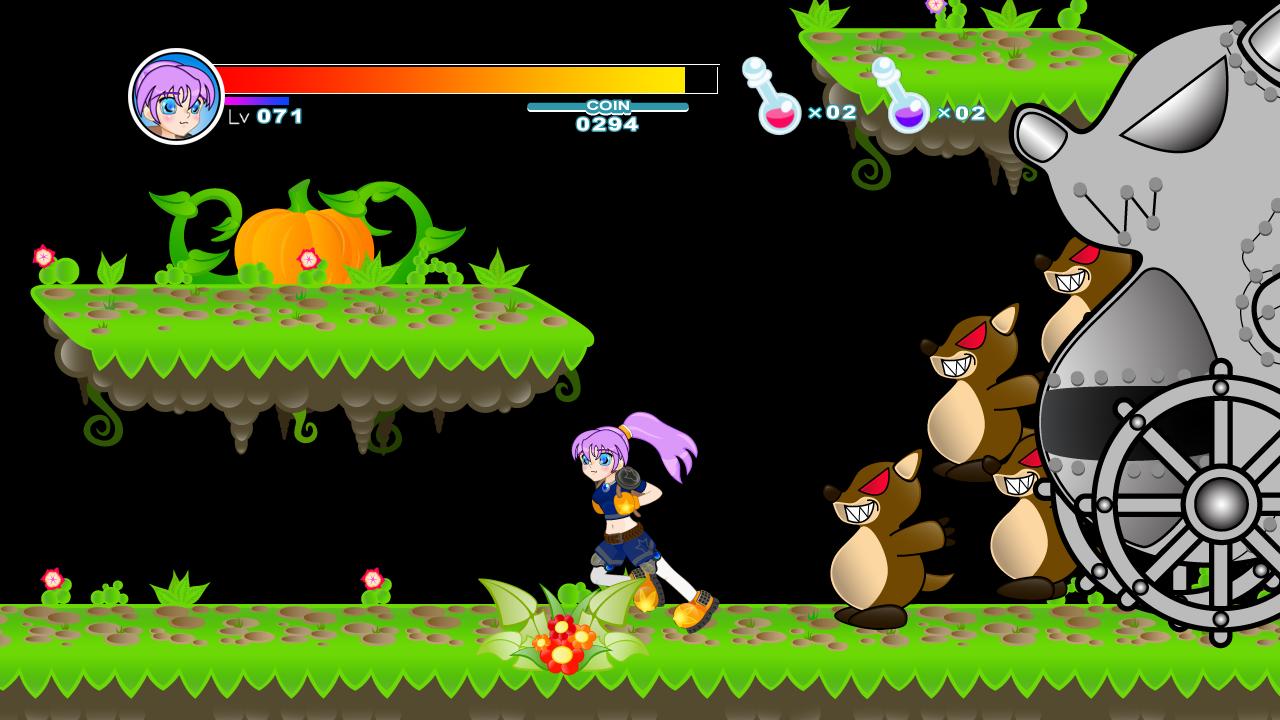 Dreams of Witchtown promotes itself as a side-scrolling action RPG. Now, when I think of side-scrolling action RPGs, I think of games like Zelda II, or Legend of the Mystical Ninja, if I’m feeling particularly obscure. This game, however, has less in common with Zelda II than it does with: soccer. You know, the one from gym class, where the point is to get as far away from the ball as you possibly can, lest some overly aggressive sports-minded bucket of hormones yells at you for kicking it the wrong way. Boy, I hated gym class.

You’re a witch on a quest to travel from left to right in order to destroy the ultimate evil. You have magical fire spells, sure, but your primary attack, so far as I can tell, is soccer balls. No, seriously! You’re a witch—you know, zap zap, zap, BOOOOOM!!—and your primary means of defeating (defeeting?) your enemies is to kick soccer balls at their heads. I don’t know if that’s terrible or freaking amazing, but I’m leaning toward the latter. Especially since you can kick them from mid-air.

Here’s how the soccer balls thing makes sense in terms of the game’s story. (Yes, there is an explanation.) Our heroine was flying on her broom to Witchtown in order to destroy the ultimate evil, when suddenly, she was hit in the head by an errant soccer ball, no doubt kicked by some No Good Kids These Days. She came crashing down, and—this is a direct quote from the game’s intro—she was “saved by a bag of soccer balls.” I don’t know about you, but I found that line to be incredibly evocative, conjuring an image in my head of a dangerous but lovable bag of soccer balls that becomes your companion and friend throughout the duration of the game. However, I’m pretty sure the game just means that the bag broke her fall.

Anyway, she gathers up the soccer balls and continues her journey on foot. And that’s why your primary attack is soccer balls. 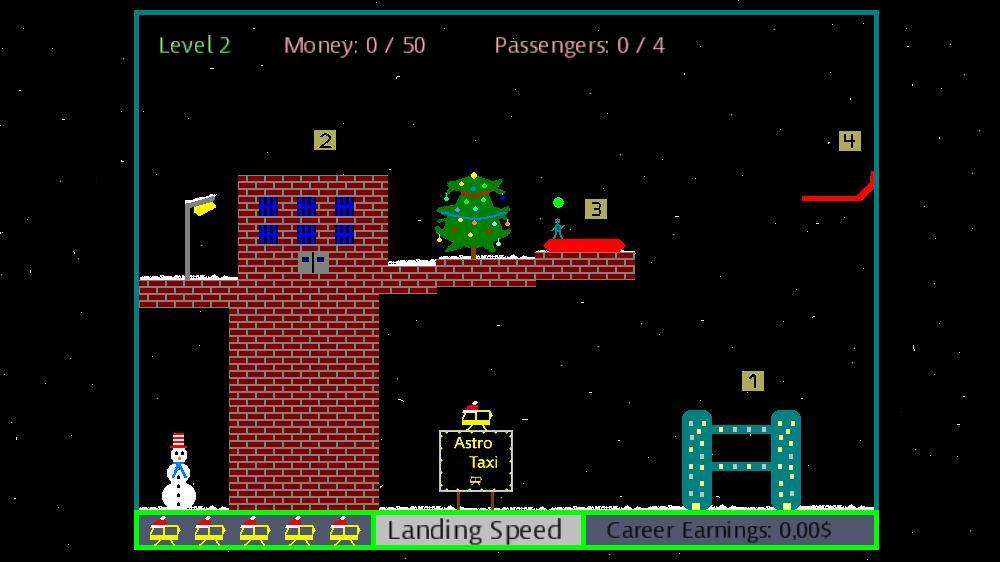 The best videogames, with no exception, are the ones in which you can kill yourself and/or innocent bystanders in a hilarious fashion. This is the primary reason SimCopter was so much fun: because you can pick up a passenger, fly high into the sky—well beyond the height of the game’s tallest skyscrapers—and push your passengers right the hell out of your helicopter. …In fact, this is the only reason SimCopter was so much fun.

XMAS Taxi is entertaining for more or less the same reason. The game is a direct sequel to another Xbox Indie Game, called Astro Taxi, in which you fly around a one-screen stage, pick up passengers, and zoooooom them over to their destinations. This game is basically that game, except with snowmen. My favorite part of the game was when I’d pick up a passenger, push the analog stick to the side as far as it’d go, and “accidentally” go flying at warp-speed into a brick wall.

Playing this game the real way is also fun, too, and more than a little challenging. It’s a simple, retro kind of fun that’s great for all us old fogies who just don’t know what to do with all these damn bits that today’s consoles have. 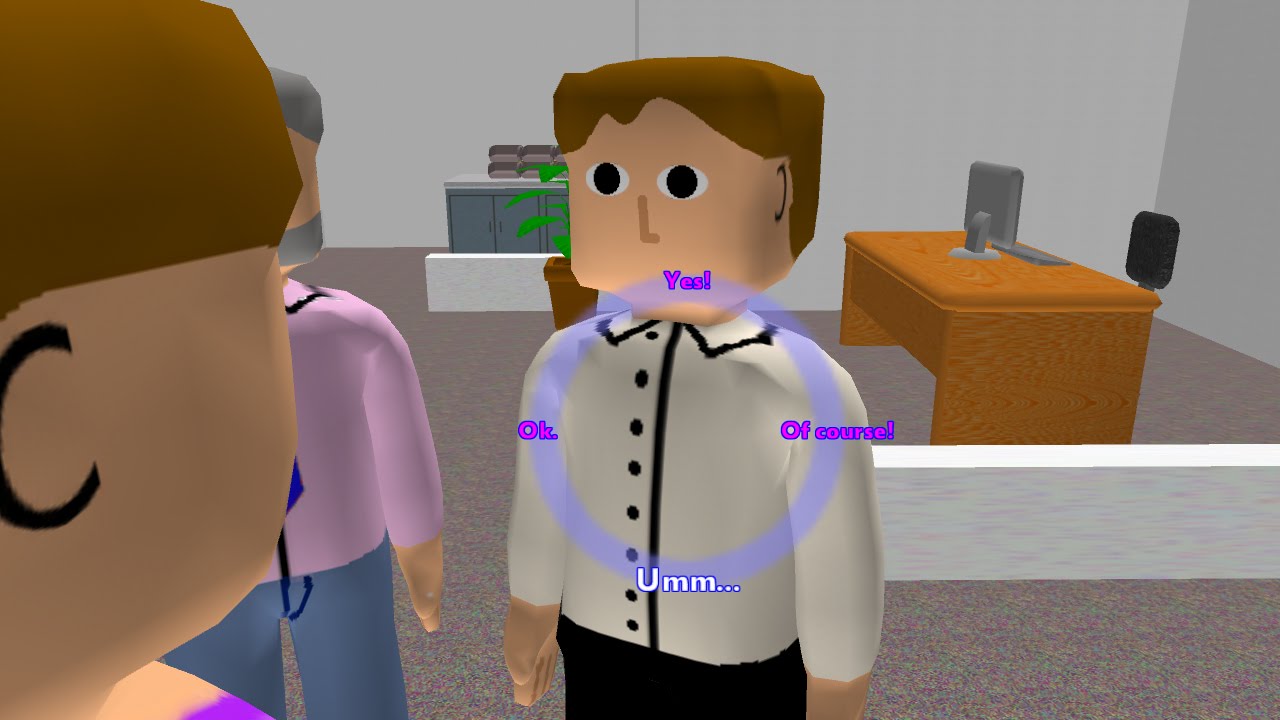 Sorry, must’ve dozed off. Anyway, that’s what the game seems like, if all you play is the demo. In a pretty unfortunate design flaw, the game doesn’t get good until the very end of the free trial, at which point everyone’s already quit and gone back to playing Mass Effect 2, and trying to figure out which alien species they haven’t slept with yet. It’s a shame they did that, too, because Office DisOrders—despite initial appearances—is one of the most fun Xbox Live Indie Games available today. They really should have stuck with it.

Office DisOrders is, kind of bizarrely, an adventure game slash The Sims. There are meters you have to maintain, like bladder, hunger, thirst, and exhaustion, but there are also puzzles you have to solve by picking up items, using items, giving items to other people, and peeking inside of boxes to see if anyone’s hiding inside them. Also, there may be explosions involved at some point, and people may or may not remove their pants. If you’ve always wished that your Sims had more storyline, more puzzles, and more, you know, actual point, then you should check out this game.

This game improves upon The Sims in another way—perhaps not in terms of realism, but in terms of actual entertainment. There’s no time stress in this game. You know how, in The Sims, there’s only so many hours in the day for you to work out, paint a picture, stare at your fish tank, and beg your sweetheart for “woo-hoo”? There’s nothing like that in this game. You have all the time in the world to do everything you need to do, which I found made the game much more relaxing to play.

And the game’s also funny! This is at the core of what’s wrong with its trial, because nothing at all funny happens until the last scene of the trial, and the humor—as well as the weird genre-mashing gameplay—is what makes this game so entertaining. There are visual puns. Visual puns! And there is, in fact, plenty of wacky hijinxing, especially as you get further and further into the game. I don’t want to spoil any of it, so I’m just going to have to hope that, at the total cost of $1, you can take my word for it and check out this game.

Organized crime in videogames? Say it ain't so!