Why do I put myself through the pain of games published by D3 Publisher? Sure, Eat Lead: The Return of Matt Hazard is brilliant (and the Live Arcade spin-off also), but it is the only game D3 has published that I’ve properly appreciated and enjoyed.

I like T&A as much as the next guy, I will admit it. Who doesn’t want a little something to look at when slicing open the heads of undead ghouls? Well actually, I don’t want to think about that during a zombie outbreak. What if you can catch the T-Virus that way?

Onechanbara: Bikini Samurai Squad relies entirely on scantily clad women, violence, and moans of pleasure for game sales. No wonder it is dreadful, and no wonder it bombed. The whole nature of Onechanbara is not work safe. I’m not making things up when I say that the combat revolves entirely around making characters climax.

Oh, I think I just caught your attention.

The main characters aren’t important—one is a schoolgirl and one is a bikini-wearing samurai. They are sisters who previously didn’t really get on with each other, but have now made up and are inseparable. You see one in the shower during the intro, completely naked.

Don’t worry, you needn’t have to buy the game to watch that sequence. You can find the scene on YouTube. Add it to your favourites like you have with all the other softcore pornography.

These ladies both house “Baneful Blood” in their bodies. Baneful Blood has some interesting side effects (more on that in a moment), but the story of the game focuses entirely on people trying to get hold of this blood. But to be frankfully honest, the game doesn’t really have a story, it’s just about sexy ladies.

At least it is not your usual zombie-horror style story. No worldwide pharmaceutical company is to blame. Our heroines are not defeating the bad guys in order to “save the cheerleader, save the world.” It’s all about sexy ladies killing zombies. That’s it. Ladies and zombies. 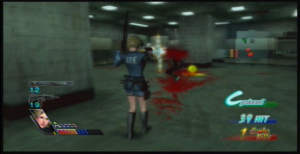 Looking like it has leapt off of the PlayStation 2 and is coated in Heinz’ patented HD Sauce, Onechanbara plays like any action-slasher from four or five years ago. Dodgy controls and simple gameplay adds to the Devil May Cry similarities. This particular Ninja Gaiden clone focuses on ladies, and this highly coveted and noble-prize winning Baneful Blood that flows through their veins. The most prominent feature of said blood is that, whenever its owner is drenched in someone else’s blood, the owner has an orgasm.

You did not read that wrong; these people literally get off on violence. A blood soaked chick writhing in pleasure.

Besides the aforementioned “Berserk Mode,” there are also “Ecstasy Attacks.” As our lead-ladies kill more zombies, they become more and more stimulated, filling their ecstasy meter. This stimulation only lasts for a short moment, but can be used to release sexually powered attacks that do a tonne of damage.

You’d think this title is geared toward adults, wouldn’t you? Anyway, this isn’t all, as a dress-up mode unsurprisingly empty of clothing items allows you to play the game with all characters practically naked, wearing nothing but their underwear.

Whether you like flat schoolgirls, big breasted samurais or slightly-manly looking policewomen, you can play the game with them entirely in their underwear, as if the over-the-top buoyancy physics and screams of pleasure weren’t enough for you already. 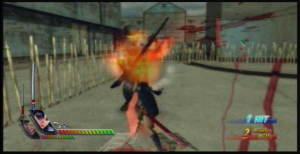 So to clarify, Onechanbara is blatantly geared toward adults. So much so, that it seems no attempt was made to make the game playable, even in the slightest. It is chained down by more than a few insect problems. Besides the bugs, it also suffers from dodgy controls, an unforgiving combo system and overpowered bosses. This results in a game that is less than average.

Other problems include, but are not limited to, the drunken cameraman. It is his job to focus on our ladies nether regions every time they perform a backward dive.

As if this weren’t enough to ruin a potentially average game, Onechanbara also succeeds in making you get lost. Sadly, the eight page instruction manual, consisting of two pages for NOTES, doesn’t really inform you about anything. We could especially do with some guidance on how to navigate around the game world.

The manual could do with mentioning the lifesaving map system. Using the map will guide you to your location much faster.

You can have that tip for free. 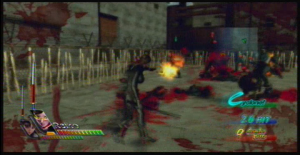 Also strangely omitted from the manual are:

Is this just a lazy publishing job or what?

To finish, what have we learned today? Ladies getting almost naked and covered in blood does not guarantee that your game will be anywhere near decent to play. It is a game with nothing but awkward slapped all over it—awkward subject matter, awkward controls, awkward levels, awkward manual, awkward soundtrack—awkward.

John McClane fights a guy in his underwear, Santa shreds guitar, and Duke Nukem gets killed by a snowman. Must be the HoHoHoliday LIVEcast!