To paraphrase what Justin Luchinski said in a relatively recent podcast, there’s not much more to adventure games than retrieving/using random items and hoping it forwards the plot. Pretty boring.

I don’t want to come out and say that’s the case with Monkey Island, because I still get hate mail from the time I said there’s not much more to Final Fantasy VI Advance besides wandering around and fighting 10,000 identical random battles, but Justin has a really good point. I just need to find a way to reword what he said and apply it to this game without using descriptive phrases like “pure drek” and “so linear that it’s basically watching a movie instead of playing a videogame, just like Phoenix Wright.”

So let me start over.

Hi! My name is Michael, and I’ve been told that I absolutely have to start playing Monkey Island games, or else pirates will attack me in my sleep. From what I can tell, there are three main reasons why Monkey Island is the greatest point-and-click adventure series ever:

I’ve seen bits and pieces of the other games, so I know the general plot of the series. You star as Guybrush Threepwood, Bumbling Pirate. He’s supposed to save the world (and his wife) from the evil zombie pirate LeChuck, but inevitably, Guybrush messes up somehow and makes the situation 100 times worse. Plus, Voodoo Lady is involved. That’s the plot of all the games, right?

Tales of Monkey Island: Launch of the Screaming Narwhal begins with Guybrush attempting to stop LeChuck with some magical root beer. The game’s automatic hint/control scheme spoon-feeds you through the game’s system of using/combining items in order to get the root beer. Guybrush then promptly drops the root beer, so now he has to find some more, and the automatic hints go away.

Suggestion to Game Designers: Don’t get rid of automatic hints before the player has solved the first puzzle of the game. 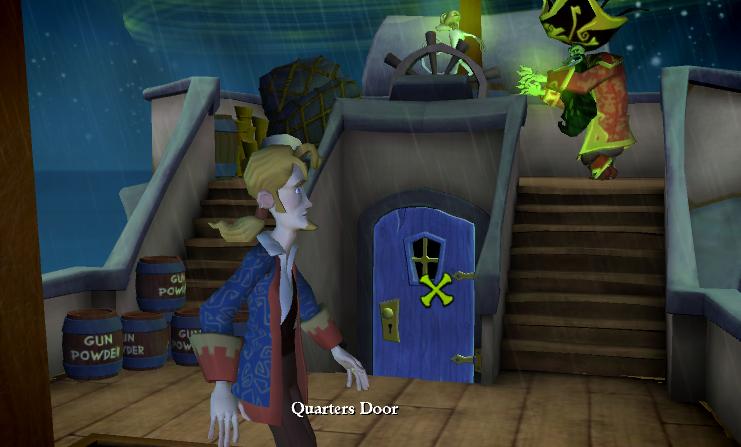 So now I’m on a boat with various items I can look at, but can’t interact with (like the door). What does this have to do with root beer?

I have no idea what I’m supposed to do right now. Why did the hints go away?

[Fast forward ten minutes. Absolutely nothing has changed.] Seriously, I have no idea what to do! Stupid game!

[Fast forward another ten minutes.] How is this supposed to be fun again?

[Fast forward another ten minutes.] I give up. This game is stupid.

Let me make a brief change to that list of reasons to play this game.

Sadly, most of the puzzles in this game have similar, counter-intuitive solutions. As you can guess, it is extremely frustrating and annoying to waste your time trying to solve illogical puzzles. Eventually, you get reduced to using the strategy of “try out every single item you have until you find the one that that works,” which negates any sense of accomplishment for solving a puzzle.

Note from Editor: Ignore everything Michael just said. The puzzles are perfectly logical and make tons of sense. You just need to be in the right mindset to be able to understand them.

So much for puzzles. What about the hilarious jokes we were promised in obnoxiously large font?

Almost every joke in the game has the exact same setup: something happens, and Guybrush makes a wry/sarcastic comment. For example, if you pick up a pink unicorn item, Guybrush might say something like, “Oh boy, a pink unicorn. That’s something no pirate can do without.”

At least, I’m guessing that’s how things are supposed to work. As you can see in the above picture, Guybrush doesn’t tell jokes that are obvious or straightforward. To be honest, I can’t tell if Guybrush is making jokes, or just being weird. Weird can be funny sometimes, but in general, I was more confused than amused by what Guybrush said. Most of his dialogue is as random as those puzzle solutions! Perhaps what this game really needs is a laugh track.

The good news is that I’m only talking about 80% of the jokes in the game. The other 20% of the jokes are, as promised, rather amusing and jolly good fun. You can certainly look forward to them, but don’t expect to see anything so incredibly hilarious that you’ll hurt yourself laughing.

So let’s make another minor change to the list of reasons to play this game:

Monkeys and pirates do appear in this game. There are fourteen monkeys and five or so pirates. One out of three isn’t bad, I guess.

List of Other Things I Want To Mention Before Concluding This Article: 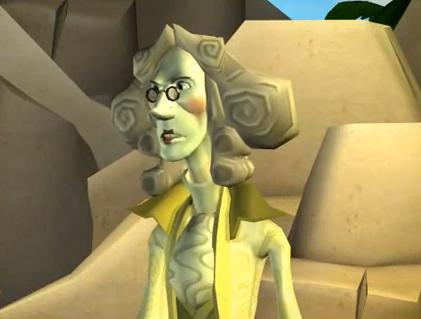 I want to say something nice about this game in conclusion, but to be honest, I can’t see much about this game that would appeal to someone who isn’t already a Monkey Island fan. The puzzle system is so bad that it completely ruins the game, only about one joke in five makes sense, and I can only presume from the abrupt ending that the Tales of Monkey Island game was split into five games in order to make more money. So much for being the best game ever.

Doom 3 is an ultra-sexy diversion with enough substance to fill the id-naysayers' mouths.