Welcome to “The Ten Reasons,” where I discuss ten reasons why I like or dislike a game. Today, I’m continuing my discussion on Final Fantasy VI Advance. I was told to play this game because it is the best game ever made, hands down, but after making it through the first part of the game, I was majorly disappointed. It was not the best game ever made; in fact, it was barely playable due to bad controls, plot/characters that are easier to forget than remember, and repetitive gameplay that is identical to Final Fantasy I. And II. And III, IV, V, etc.

Amazingly enough, however, Part Two of Final Fantasy VI Advance is totally different! Sure, you still have to fight through 1,000 identical battles, but now there’s actual plot and character development! And dramatic cutscenes and overall good gameplay! I definitely enjoyed it. I mean, take how bad the first part of the game is, then invert it, and you’ve got how good part two is.

In my mind, this begs the question, “Why did they wait until Part Two before putting in good material? Why do they force you to trudge through 8-10 hours of pure drek before bringing out something that’s actually fun to play?”

I have no idea. Anyway, here are the ten reasons!

Reasons Why I Like Final Fantasy VI Advance (Part Two)

Can our heroes find love, or will they end up being as two-dimensional as their sprites? Why are they putting major relationship drama into a game that has nothing to do with relationships? When did this RPG turn into Days of our Lives? I don’t know, but I like it!

Seriously, Days of our Lives is probably my favorite TV show ever. Max Brady is back on the show, and it just got renewed for another season! Coincidence? I think not.

At one point, our heroes have to perform in an opera, which is a pretty creative and interesting challenge. Sing along with the music correctly! Don’t mess up your cues! Stand in the right spot at the right time!

It’s a fun little challenge, and a well-needed break from 40 hours of RPG battles.

The plotline, however, runs completely out of control at this point. If you haven’t played the game before, here’s what happens:

There is a popular opera star named Maria, who happens to be the doppleganger of our heroine Celes. Because learning an entire opera overnight is super-easy, Celes replaces Maria in the opera, in hopes that she will be kidnapped mid-performance by a man named Alka-Seltzer. Apparently, Seltzer has a track record of kidnapping the girls that he likes, and this is the easiest way to get in contact with him. Anyweird, the plan goes smoothly, until an evil talking octopus with a grudge against Maria attacks our heroine, and a huge fight ensues.

Why is it that multiple people feel the need to attack Maria mid-opera? Why is it that we never see Maria herself in the game? Why do our heroes immediately accept Seltzer into the party when he is clearly a man without morals? I dunno. It was still a fun part of the game, though. 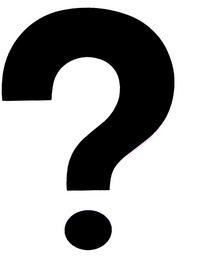 OK, so I just got finished saying that Part Two of FFVI is good because it has a plot. That’s only half-true, I guess. While having an actual/interesting plot is definitely a good thing, the plot in this part of the game really confuses me at some points.

I imagine that quite a few logical-minded people were asking questions like, “Wait, if there’s only one airship in the world, why do the bad guys have a defensive air fleet larger than England’s?” Or maybe, “So this is, what, the tenth time Celes has turned out to be a traitor? Why does everyone trust her, again?” My personal favorite—Illogical Plot Point #23—is “the main villain is destroying the world now. Why are our heroes leaving the Floating Continent instead of, I dunno, trying to stop the villain from destroying the world?“

It doesn’t help that the game doesn’t try to explain anything at all. Like espers. What are espers? In Part One, espers are glowing rocks that bad guys want to harvest. That is, the first half-hour of the game is all about how villains are trying to get the esper rock out of the mines of Narshe. But here in Part Two, espers are weird alien creatures that can talk. And they live in some sort of magic dimension parallel to ours. That’s the sort of thing the game should have explained at some point or another.

I mean, sure, if you’ve played the game before, you know what espers are. But the first time you play through the game, it makes no sense whatsoever, and you can’t understand why Part Two is directly contradicting what Part One said about espers. Eventually, I had to give up trying to make sense out of the game and just agree with whatever new information it said about espers.

In retrospect, however, the video of me trying to make sense of the “Terra turns into an esper” cutscene is rather amusing, because I have no idea what’s going on.

In conclusion, confusing plots are bad, but I’m going to give this game the benefit of the doubt and guess that the plot makes a lot more sense during a second playthrough.

4. The Thought of Kefka and Celes Having Children


Near the end of this part, Lord Voldemort (who looks more like Dumbledore for some reason) kind of orders Celes to have children with Kefka.

This is a very, very disturbing thought. *shudder* 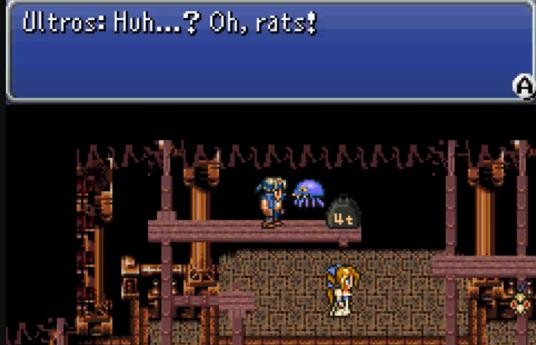 OK, seriously, Final Fantasy VI. Who the heck is Ultros the Talking Octopus, and when did he suddenly become a main character? I demand that you explain who this character is and why he hates our heroes so much, because not telling the player anything at all about a recurring boss is super-lame. 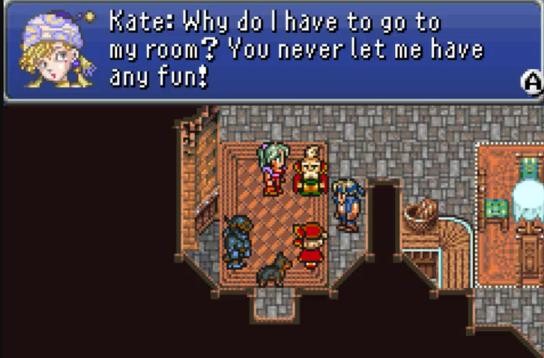 Really late into the game, they introduce new characters: Strago and Relm. By “really late,” I’m pretty sure it’s something like 20 hours into the game.

The new characters get a minor subplot, but they really should have left it out of the game, because it’s boring and pointless. Something about a house being on fire? It has nothing to do with the main plot of the game at all; it’s just a transparent excuse to introduce the new characters and try to trick you into caring about them.

I never ended up using Strago and Relm. Ever. I’ve been using the same party for 20 hours, why should I change it now to accommodate some new, underleveled characters that require expensive equipment nobody but them can use? Besides, you can only use four characters at once, and I already have eight. More characters are unnecessary.

7. Totally Abandoning Terra in the Town of Zozo 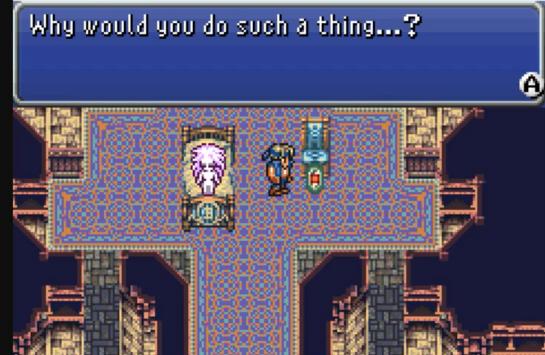 Part Two begins with our heroes trying to find Terra. Terra just turned into a Purple Super Saiyan Three…I mean, Purple Flying Thing—and flew off for some reason. She’s our friend, as well as the game’s main character, so our heroes set off to find her and learn what’s going on.

They find her lying unconscious in the Town of Zozo. Zozo is a dangerous, monster-infested town. In fact, it’s the only town in the game to feature random encounters. Clearly, this is not a good place for Terra to be, as she is so weak that she can’t even stand up.

So what do our heroes do?

A) Wait for their friend to wake up
B) Take her to safety
C) Totally abandon her in favor of moving forward with the next plot point.

If you guessed “C,” congratulations! You guessed correctly. You also are the worst possible friend Terra could have. 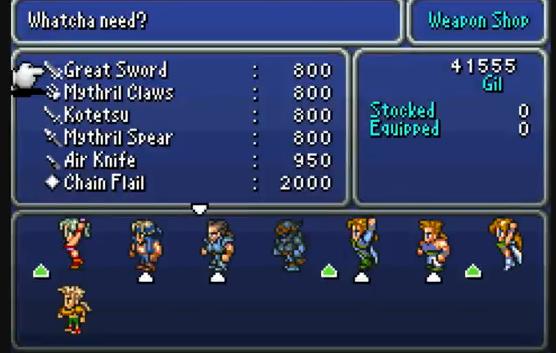 I’m a little hesitant to complain about the shop interface because I complained about it already in Part One, but a new problem with it arises in Part Two.

To be fair, the shopping isn’t all bad. I particularly like shopping in this game, because when you look at an item in a shop, it tells you who can equip that particular item. This is a major improvement over Final Fantasy I. Am I the only one who continually spent all his money on weapons that none of the characters could equip? Because I know I’m not the only one who had problems equipping items in that game.

But the problem with shopping in Part Two is that the game has the nasty habit of de-equipping characters who are not in your party at the moment, such as when Terra is completely abandoned in Zozo (see Reason #7). Because she has no weapons equipped, the shop tells you that every weapon increases her attack power, which is no help whatsoever. You’ll probably end up spending a lot of money on unnecessary equipment because of this. That’s kind of a pain.

9. Showing off the Graphics 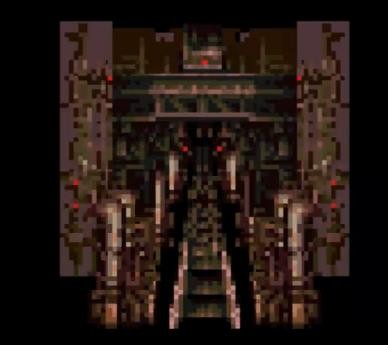 There are a few scenes in which the game does a slow pan over various areas in order to show off its fancy graphics.

Maybe the graphics were impressive on the original SNES version of the game, but for the GBA release, they’re quite ugly, like the above picture from the “escape on a minecart” sequence. That entire sequence was offensively ugly. Maybe they just overlooked that part of the game when redoing the graphics for the re-release?

In any case, it’s quite appalling to see those few sequences in the middle of game which otherwise looks great. 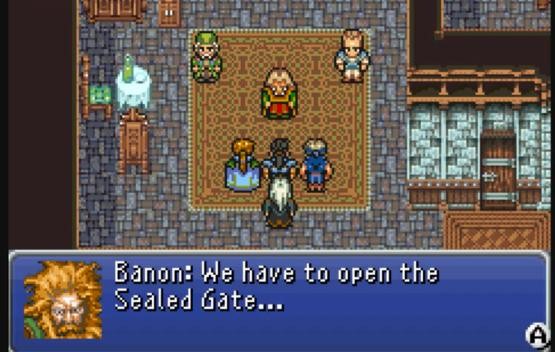 OK, so this game is really predictable at times. Whether we’re talking about Terra’s Amnesia of Plot Convenience™, Emperor Gestahl’s Obviously-Fake-Truce (“I’m toootally not evil any more! So would you pretty-please let your guard down now?”) or Kefka destroying the world (“If someone moves the Warring Triad statues, the world is destroyed! Boy, I sure hope the bad guys who are going to steal the statues don’t touch them!”), you’re going to see a lot of things coming from a mile away.

The worst offender is Banon, who is the leader of the Resistance, and apparently, a total idiot. Here are the facts of the matter:

After thinking it over for approximately zero seconds, Banon decides that the best thing to do is open the gate to the esper world! Oh, sure, that plan can’t possibly backfire! The main villain needs espers to take over the world; let’s give him access to all the espers he needs!

Banon, you should be fired from your job as leader of the resistance.

OK, so those are the Ten Reasons for Part Two of Final Fantasy VI Advance! For the sake of being thorough, I’ll try to write a column on Part Three of the game (starting at the World of Ruin) someday. As a spoiler, let me share with you a comment I received about the end of Part Two…

Everything after this Part will be﻿ awesome.

See you later, everyone.

I've become a different person in the span of two years. Where I was once a bright-eyed, bushy-tailed high school youngling, I've now matured into a smart, wise, and generally handsome college student