Hello everyone, and welcome to “Oh the Humanity!”, the column that reviews videogame-based movies and books. In this installment of the column, I’m reviewing The Legend of Zelda: Ocarina of Time, Part One. This is a Japanese manga book that has been translated into English.

You might remember that last year, I read Volume Two of the official Phoenix Wright manga, a book which is—and I mean this in the nicest possible way—so bad that it made my eyes fall out of their sockets. Well, not my eyes, my nose. The same thing must have happened to the characters in that book, because none of them had noses either. I’m not sure what was worse—the fact that nobody looked like they do in the games, the fact that nobody acted like they do in the games, the terrible pointless stories, or the gratuitous nude scenes littered throughout the book.

Sorry, I went on a tangent there. What I’m trying to say is that the Phoenix Wright book wasn’t good, but this book is The Legend of Zelda: Ocarina of Time. That means it has to stick to the storyline, right? All the characters will act the way they did in the game, right? Please, please let that be the case.

You know, I should have seen this coming. There is a MAJOR fundamental problem with any sort of Legend of Zelda comic book. You see…

This book decided to go with the talking Link scenario, even though Ocarina of Time Link doesn’t talk. Now, I’m not saying that having a talking Link is necessarily a bad thing. I would really like to see Link talk in Zelda Wii, when it’s released in 2019. But…as you can see above, the personality they give Link in this book is best described as “Sugar Rush Link.” It doesn’t work for me.


It’s kind of a shame, too, because a lot of the stuff they made up for this book is really good. Link meeting Zelda disguised as a commoner works well. The scene with Ganondorf talking to Sheik was really intriguing, and Ganondorf mistaking Link’s fairy ocarina for the ocarina of time was an inspired plot point.

So…I’d say there’s a lot to like about this book. But I just can’t get past Link’s new personality. Hyperactive Link is not the Link of Ocarina of Time. It’s like you’re at the Grand Canyon, but there’s a big fat guy standing in front of you the whole time. You can kinda see around him and enjoy the good stuff, but it’d be a lot easier if he wasn’t there.

Now, if you can get past the fact that this book stars Sugar Rush Link, and the fact that it doesn’t follow the game exactly, this book is rather tolerable. It might even border on “good.” I would consider reading Part Two someday, but I probably won’t, because I still have a hard time reading “manga style.” By “manga style,” I mean that you have to read the pictures from right to left, while reading all the text from left to right at the same time. As you can guess, it literally hurts to read this way, and you have to stop every now and then to give your brain a rest, which doesn’t exactly make for an enjoyable time. 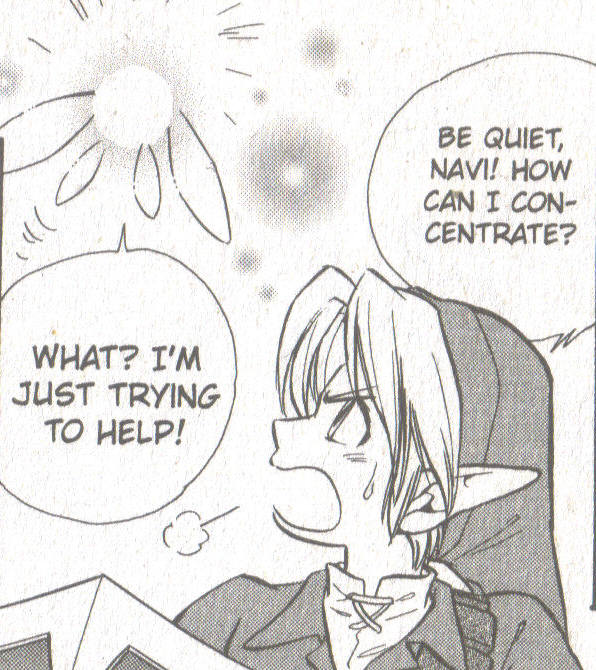 Hello, hello, and welcome to this month's edition of testgame.exe: Making the Adventure! I guess you guys are pretty used to this by now, but there's not too much new stuff this month, but those thin