Of the many RPGs that I have encountered throughout my gaming history, none had touched me quite like Star Ocean: The Second Story, and nothing has quite hit me the same way since. Perhaps a few have come close, but they’re not quite there! The game boasts a unique cast of characters, and your personal interactions with them affect future events (much as the Sakura Wars series seems to do), resulting in some oft-nice moments. The battles occur in real-time and they’re more interactive than turn-based affairs, though the infinite voice samples may grate on your nerves if you are not so forgiving. The plot twist between discs is also exciting, surpassed only by that of the game’s PS2 sequel, which was pretty damn near amazing. But ultimately, Star Ocean left me feeling satisfied with the plot and all the effort I had put into it. So much so that, unlike any other game as of yet, I actually went back to play it again. That’s the sign of the ideal game for me, and that’s Star Ocean.

Transform a rugged patch of nature into a tiny hamlet that burgeons into a bustling metropolis, then blow it to smithereens with hurricanes, earthquakes, and rioting lawyers. SimCity 2000 strikes the perfect balance between simplicity and complexity, and it offers both near-infinite replay value and a satisfying conclusion to the story of every city. Whether you’re trying to restart Detroit’s stalled economy, build a city that occupies every space on the map, write your name on a hillside using railroad tracks, or set fire to a cluster of elementary schools, SimCity 2000 offers one of the best sandbox experiences you’ll ever…uh…experience. 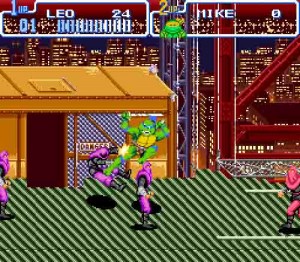 The Teenage Mutant Ninja Turtles might be better known by today’s youth for their “dark and edgy” 2003 4Kids Entertainment cartoon (which I believe was called “Serious Business: Raphael’s Grumpy Adventures in Space”), but when I was growing up, the turtles cracked wise, they surfed and skateboarded, they ate cheese pizza with ice-cream, and they were the best goddamn thing in the entire world. And this game, Turtles in Time, instead of being a cheap cash-in of an über-popular children’s show, put a mask and a pair of nunchucks in our hands and said, “Here kid; you have a try.” It’s a super-fun, two-player simultaneous beat-’em-up side-scroller that let you take control of your favorite turtle and wail away on robots, and it was the perfect tie-in to what was, to us, at the time, the perfect television show.

OK, so Turtles in Time may not be very different from its predecessor The Manhattan Project (or even the one before that, The Arcade Game), but it improves upon those already great games with better graphics, better music, more exciting levels, and pirates. And cowboys. Also dinosaurs. And, most importantly, time travel. Back to the Future and Chrono Trigger would like to remind you that time travel is a turtley awesome plot device, and if you combine that with the perfect television show and gnarly beat-’em-up gameplay, it is scientifically impossible for your game to be anything less than an 11/10.

If I had never gotten my hands on Banjo-Tooie, I may have wound up sane. Honestly, there’s just no way anyone can say they’ve kept their sanity after playing this game. It’s all too much to handle. Remember Canary Mary? Yeah, I can still hear those wankers at Rare laughing at me. But you know what? That N64 cart was magic. It was the first time in an adventure game where I felt like I was exploring one giant world, instead of some cool stages. The story was dark, with tales of Death and Defeat, on top of the googily-eyes and egg-farting. It’s a graphical achievement of the 64-bit generation, a masterpiece of music and sound, and (along with its predecessor) one of the few titles I put on the list of mandatory gaming materials that anyone who dares to say they love our hobby should have played though. This is a crowning masterpiece of the medium, and its place on this list is truly earned.

But fuck Canary Mary. Soooooo much. It’s Super Mario. It’s Squaresoft. You put them in a cauldron, add an eye of newt and a shell of Nok, and you have yourself a stew suitable for an audience of Mario fans and RPG lovers alike. Think of this as a beginner’s RPG with all the charm and pizazz of the Mario series. This game is so easy to get into, even for the RPG inept. Rendered with all the beautiful prerendered 3D spritism the SNES can emit, Mario never looked so good. He’s even more handsome here than in Super Mario 64. That’s reason alone to like it.

Silent Hill 2 sees protagonist James Sunderland travel to Silent Hill after receiving a letter from his dead wife. During his journey, he meets twisted creatures and indeed twisted people as well—trying to find his dead wife, waiting for him at their “special place”.

This is a shocking, thought-provoking experience that does what all survival horror games should really do—get inside our heads. James isn’t your usual survival expert; he doesn’t have machine guns and incredible combat abilities. He is a middle-aged man, which makes him all the more human, and his experience all the more real.

After playing BioShock, I found myself interested in exploring the game’s roots: the System Shock series. I was able to acquire them both and played System Shock first. It’s an excellent game, especially considering its age and the difficulty I had getting it to work. After that I moved on to System Shock 2 and, after some help from a very dedicated online community, the installation of some mods to update the sound and graphics, I found that the reputation of System Shock 2 was much deserved.

If BioShock raised the bar for the modern FPS, System Shock 2 set the bar in the first place. The setting—a spaceship overrun with mutants, aliens, and killer AIs—creates an atmosphere of isolation and the feeling that you are only seconds away from dying alone in space. The game allows you to grow and customize your character through a number of weapon and class skills, a first among first-person shooters, and also features one of the greatest twists in videogame history, another first for the genre. The real-time inventory system can feel a little clunky at times, but this actually adds a bit of franticness and thrill to the game, simulating how it might actually feel to have to rummage through a bag while hostile aliens are bearing down on you. Overall, System Shock 2 is simply a great and well-built game that set the stage for almost every FPS since its release.

Anna rants about a personal experience she had with a Reddit troll.