We’ve now reached the final part of our Top 50 games of all time feature. Over the last two weeks, we’ve discussed 40 of the best games ever, spanning several generations. Before getting to the top 10, let’s recap the games we’ve seen so far:

48. Mega Man 4—Added a layer of polish to an already great franchise.

47. Perfect Dark—A revolutionary FPS that helped change multiplayer gaming as we know it.

46. Deus Ex: The Conspiracy—An amazing, open-ended FPS-RPG with something for everyone.

44. Star Ocean: The Second Story—An action-RPG where your actions can play a role in how the game’s robust story unfolds.

43. Sim City 2000—A perfect balance of simplicity and complexity makes this the ultimate sandbox game.

41. Banjo Tooie—An N64 classic adventure that will suck you in and have you laughing until the end.

40. Super Mario RPG—A Nintendo/Square collaboration could have yielded a game starring Mario as a thin, flamboyantly dressed, big-haired emo-warrior, but, thankfully, it gave us an excellent RPG set in the Mushroom Kingdom, instead.

39. Silent Hill 2—What happens when a regular guy wanders into an empty town because his dead wife told him to? Pure fucking terror, that’s what.

38. System Shock 2—A tense FPS in space with a more engaging storyline than the 50,000 other space FPSs that have come out since.

37. Mega Man 2—Even more classic than the original. If you’ve played only one Mega Man game, it was probably this one.

36. The Legend of Zelda: A Link to the Past—This epic return to the style of Zelda 1 cleared up any doubts about the franchise’s staying power and confirmed that we’ll see much more of this green-clad Hylian for generations to come.

35. GoldenEye 007—It’s already incredibly rare that a game based on a movie is good—but this one is so good that it actually revolutionized the industry.

34. BioShock—When you take a solid FPS, give it a steampunk retro-future style and add in an engaging story, you’re bound to come out with a classic.

32. Super Smash Bros. Brawl—Pushing mascot characters off cliffs has never been so fun in this installment of Nintendo’s self-tribute series.

31. Star Wars: Knights of the Old Republic—This western-style RPG fully immerses you in the Star Wars universe 4,000 years prior to the rise of the Empire in a story that beats the piss out of any prequel.

30. Okami—It passes over the usual Greek and Norse mythologies to bring a beautifully stylized game based on classical Japanese mythology, and it’s a damn fun game to boot.

29. Mega Man X—After six games on the NES, the Blue Bomber was in need of some refreshing—Mega Man X delivered and improved on the original, helping to keep the series alive to this day.

28. Rock Band 2—While Mr. Why-Don’t-You-Play-A-Real-Instrument-Instead is out on the quad playing shitty acoustic Dave Matthews covers, this party classic allows you to play a nearly never-ending playlist of songs with your friends locally and online in a perfect blend of goofy and awesome.

27. Lufia II: Rise of the Sinistrals—An RPG that offers great level design, no need for grinding filler and no random encounters—so it’s essentially the perfect RPG.

25. Katamari Damacy—A simple concept goes a long way when it’s infused with quirk, charm and a whole lot of fun.

24. Final Fantasy VI—Story, audio and cutting-edge graphics for the time—this game showed us what an RPG could and should be.

23. Fallout 3—Bethesda’s newest iteration of the PC classic proves even more fun than the originals in this open-ended post-apocalyptic sandbox.

22. The Secret of Monkey Island—The charm of this laugh-a-minute puzzle-solving adventure demonstrates exactly why the SCUMM adventures of the 90s have such a huge cult following.

21. Final Fantasy VII—The most recognized Final Fantasy game around—and with such a great storyline, an unheard of presentation and one badass villain, is there any wonder why?

20. Tetris—A game with such far-reaching, universal appeal even your mom likes it—and she still calls them “Intendo tapes.”

18. Mass Effect 2—This relative newcomer is not only an incredibly fun shooter/RPG hybrid, but it also spins a furturistic sci-fi story that’s not just good for a videogame—it’s good. Damn good. Period.

17. Castlevania: Symphony of the Night—With a huge castle to explore, secret items and rooms, and addictive action, this game showed that ripping off Metroid might be the best move the franchise ever made.

16. Team Fortress 2—Scout, Engineer, Spy, Pyro—all completely different, and all perfectly balanced in some of the most meticulously designed levels and the best class-based combat ever designed

14. Secret of Mana—Take a great story with great action RPG mechanics, and, naturally, you’re going to have a great game. Add in some multiplayer, though, and you’ve got something beyond great—Secret of Mana.

13. Super Mario World—If Super Mario Bros. created the platformer, this sequel perfected it. Nothing has even come close since. 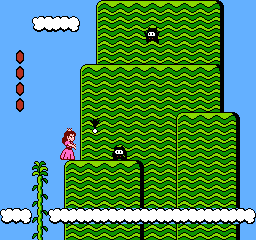 12. Super Mario Bros. 2—What do you get when you take a poorly-selling Japanese game, slap a picture of Mario over the main character, and trick Americans into believing it’s a proper sequel? A classic, apparently.

11. The Legend of Zelda: Majora’s Mask—A game in which you keep the moon from crashing into the planet with the help of magical masks may sound dumb, but if your game plays similar to Ocarina of Time, then I don’t care if the point of the game is to collect magical rubber gloves that summon forth a giant demonic chicken—I’m still going to play the hell out of it.

With those out of the way, how ’bout you move on to the next page and check out the final 10.

Is this guy a rapper? I think I read that he's a rapper.