It’s been described as “equal parts Diablo and Monkey Island” by people who clearly don’t remember Monkey Island very well (or, at least, who never played it on Mega Monkey mode). It’s much more accurately described as Diablo with jokes, and on a console, and without 14-year-old grievers insta-PKing you with their Boba Fett trainers in order to collect your severed ear. (Of course, that doesn’t look nearly as good on a preview blurb.) It’s Ron Gilbert’s latest game, and it’s an action-RPG where you literally—and I’m using the word literally here—beat the poop out of your enemies. (Also, you induce unicorns to poop, collect notes in dragon poop, and unlock a t-shirt for your Xbox Live Avatar with a steaming picture of poop on it.) Better hope you’re not Death, because today we’re talking about DeathSpank. You are DeathSpank. Dispenser of justice. Hero to the downtrodden. Promulgator of terrible voice acting. You’re here to beat up The Big Bad (capitalization mine), obtain The Artifact (capitalization theirs), and collect orphans in your big burlap sack for later use. Mostly, you’re completing side-quests, such as defeating a rampaging two-eyed cyclops, or collecting rocks for a hobo’s rock soup. Occasionally you advance the main plot, too, but at its core, DeathSpank is a total side-questathon—so if you’re the type to skip side-quests, you may want to pass on this game, because you might be bored out of your mind otherwise. (Actually, I’m generally one to skip them, but I completed ever single damned one in this game because their dressing was so much more entertaining than the standard “defeat 10 lizards to collect 10 lizard tails.” There isn’t even an Achievement for beating them all; I just did it. That’s right.)

The game’s being sold as a cross between Monkey Island and Diablo, but they’re only saying that because the game’s tone is light and it’s made by Ron Gilbert. There are virtually no adventure game-style puzzles in DeathSpank, save for a few instances (perhaps three in total) where you have to use one item on some other item in order to do something. The rest is pure hack-‘n’-slash, same as any other dungeon crawler, but what makes this game stand out is that it doesn’t take itself seriously. Stories in this genre tend to be dramatic, sweeping, and dull; DeathSpank actually has some personality to it, and it’s actually fun to read the dialogue in this game. I wasn’t just skipping over it to get to the parts where I got to stab things with my dual-wielding Drizzt rip-off; I was actually paying attention to it, and shushing my fiancée whenever she’d try to talk over my important reading.

Speaking of reading, that’s something you’ll be doing a lot in this game—not only because the dialogue is (generally) pretty well-written (though it could’ve used a solid copy editor) (speaking of which, Ronnie, if you’re reading, call me), but also because you’ll have turned off the voice acting immediately after hearing DeathSpank speak for the first time. At least, I did. He is freaking unfathomable. It’s not that the voice actor is bad; he’s playing his role to perfection. The problem is the role itself. Apparently, his directions must have been just “be The Tick, but more.” The way he hams it up ruins every line, by drawing too much attention away from the clever dialogue, and instead focusing on the apparently hilarious joke of “DeathSpank talks like an overblown superhero archetype.” The voice you’ll come up with in your head for DeathSpank will be a thousand times funnier and more suitable than the voice they actually went with.

The Monkey Island 1 and 2 remakes showed us that great voice acting can make an already-great game even greater; the voice acting in DeathSpank, conversely, shows us that bad voice direction can completely ruin a solid game. If there was no way to turn off the voice acting in this game, I wouldn’t have bought it, because it wouldn’t be a fun game anymore. It’s that bad. 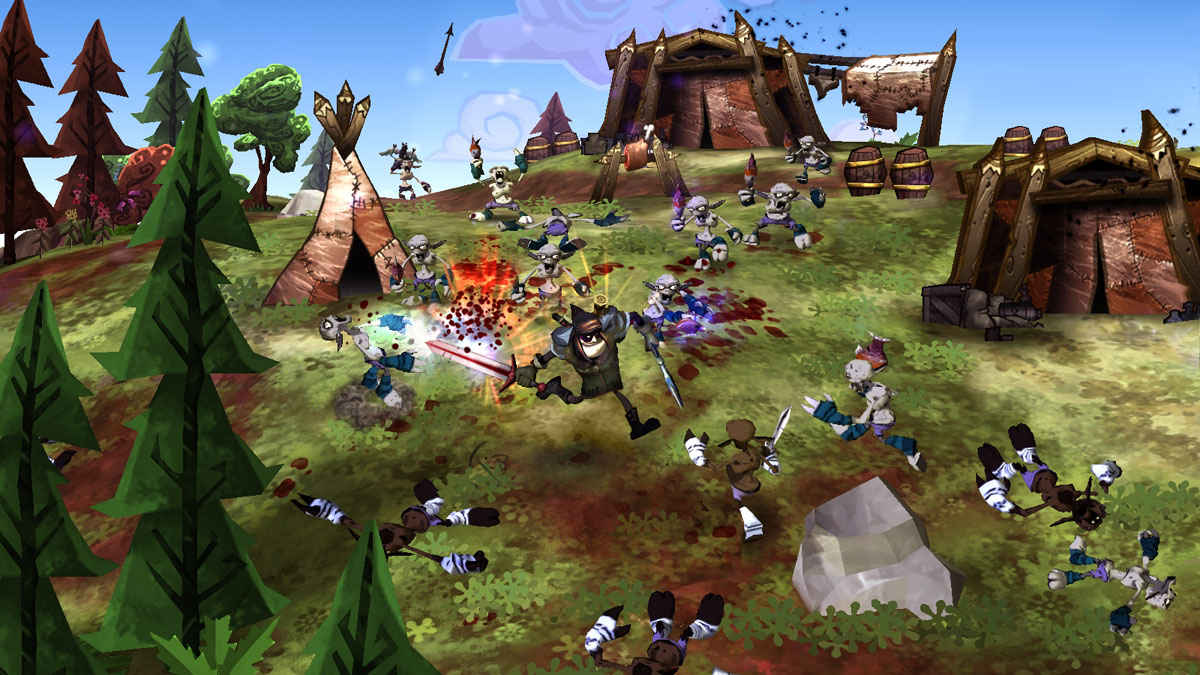 Speaking of “Why did they think that was a good idea?”, there’s also the poop jokes. What the crap? (Literally?) People keep talking about this game having a Monkey Island feel to it. Who could ever forget the part of Monkey Island where Guybrush has to defeat the zombie pirate LeChuck by taking a huge dump on him? Is Ron Gilbert just not as funny as we all thought? Was Dave Grossman the real funny man in Monkey Island? Did one of LucasArts’ interns sneak into the office late at night and insert insult swordfighting? (Actually, that’s almost true, since insult swordfighting was written by acclaimed fantasy writer and crazy person Orson Scott Card.)

But anyway: Don’t let the poop jokes scare you off, like they almost did for me. Sure, you collect monster poop, throw poop at enemies, trade poop to farmers for orphans, and travel through the world via outhouse; but I think I’ve now described every instance of poop humor in this game. It’s played up in the trailer, but the game isn’t entirely a John Cena fest; there’s actual humor to be found, too.

(Note to non-wrestling fans: John Cena is a famous professional wrestler loved by kids all across the world for making hilarious jokes like “look at the poopy stains on my opponent’s trousers.” I couldn’t find an appropriate source to cite for this, but I did find this helpful question-and-answer while researching on Google.)

The jokes aren’t exactly the rip-lolling good time you’d get from a game like, say, Enchanted Arms, but most of them are actually funny, which already puts the game leagues ahead of most other games being sold as “comedy” (see: The Simpsons Game). You’ll read the dialogue, go “oh, hah, that was a pretty clever thing to say!”…and then immediately forget about it, but that’s OK, since so much of the dialogue (not to mention item and quest descriptions) is exactly like that. It’s fun to read—which is a pleasant innovation for this genre.

(Although, that said, I could do without the game’s favorite punchline of adding “…OF JUSTICE!!!” to the end of everything, which gets tiresome almost immediately. It was funny when the game’s original name was DeathSpank: Orphans of Justice, but they overplayed it like crazy.) 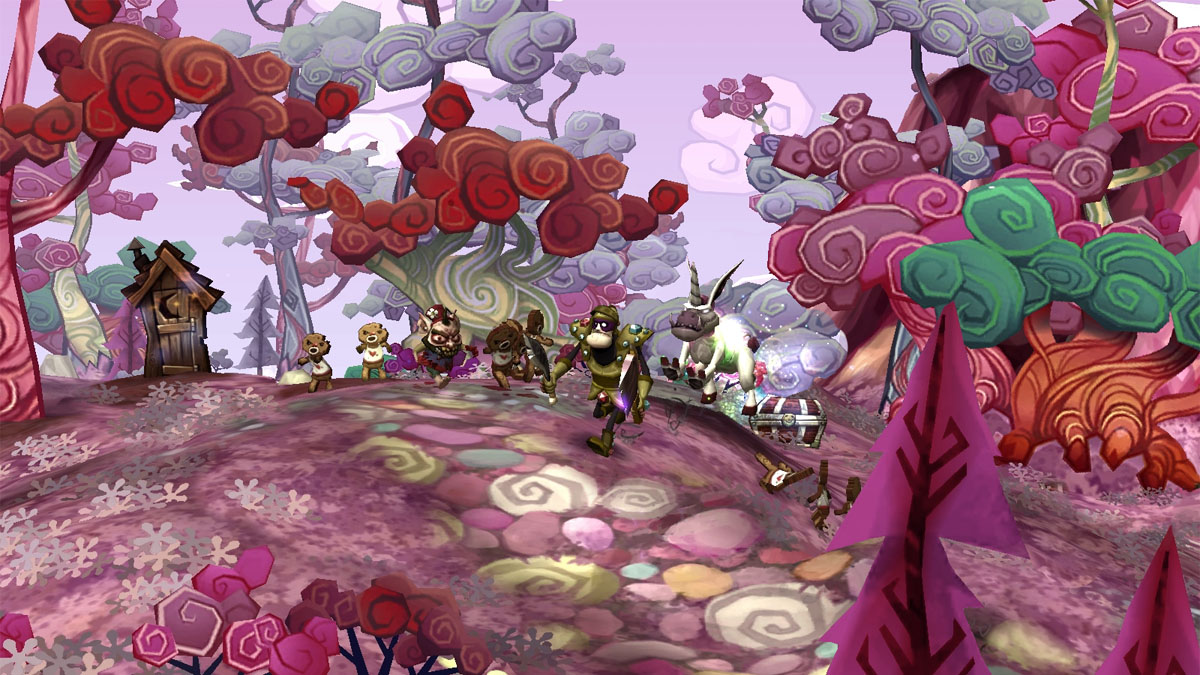 Speaking of shifting gears, one of the other things I like about DeathSpank is that you never have to worry about inventory management; at any time, you can use an item grinder in your inventory to turn your loot directly into gold, without having to interrupt your game to play shop. It’s not realistic and it probably (unfortunately) won’t be adopted by more Serious Business RPGs, but it keeps things moving, and it doesn’t force extreme item-gatherers like me to use a town portal every ten minutes to sell off junk. (Which I think anyone who’s played an RPG online with me would probably appreciate. “Hold on! Don’t go after the boss yet! I gotta sell off these rusted daggers… What do you mean ‘just drop them’?! That’s nearly 7 gold we’re talking about!”)

Not that there’s much of a reason to gather gold in this game. The only things I ever found myself purchasing were potions, since I usually found much better and much more interesting weapons and armor by just killing things, smashing barrels, and unlocking treasure chests. I mean, why am I going to buy the boring “Functional Helm of Function” when I’ve just uncovered a hat that makes me look like a wolf? (Actually, relatedly, I wish they’d gone even more overboard with the weapons and armor. With way too many of them, the joke was something like “Functional Helm of Function,” or “Justice Blade of Justice.” C’mon, guys! Give me a spaceman helmet! Give me an enormous fish that I can beat things to death with! Let me use the orphans as a weapon. You can do so much better than just “Functional Helm of Function.”) I never ran out of gold in DeathSpank and ended the game with nearly 1.5 million gold pieces, because there was so little I could actually do with them, besides buy potions.

Although, I guess that explains why they made potions so expensive (nearly 30 thousand gold pieces for one potion!) and only allow you to carry five of one at a time, Secret of Mana- style. If they didn’t, you’d just be able to sail through the game by spamming the “purchase” button at the potion shop and then healing every single time you took damage. I would’ve done that in a heartbeat, so I’m glad they didn’t let me.

Not that this game isn’t super-easy as it is. I played DeathSpank on Medium and sailed through the game anyway, mostly because I took the time to do every single side-quest, since they were all (poop quests aside) amusing. As a result, I was super leveled up through most of the game, and the final boss took me less than a minute to kill. I don’t think that’s really a complaint coming from me, though. If I’m dying all the time, and having to re-do things, I’m not having fun—so what’s the point in playing? As a bonus, in this game, if you die, you don’t have to redo anything anyway; you just lose a little gold and go back to the nearest checkpoint. (In fact, you can even get your gold back if you can fight your way back to where you died, which usually isn’t difficult if you stock up on potions.) 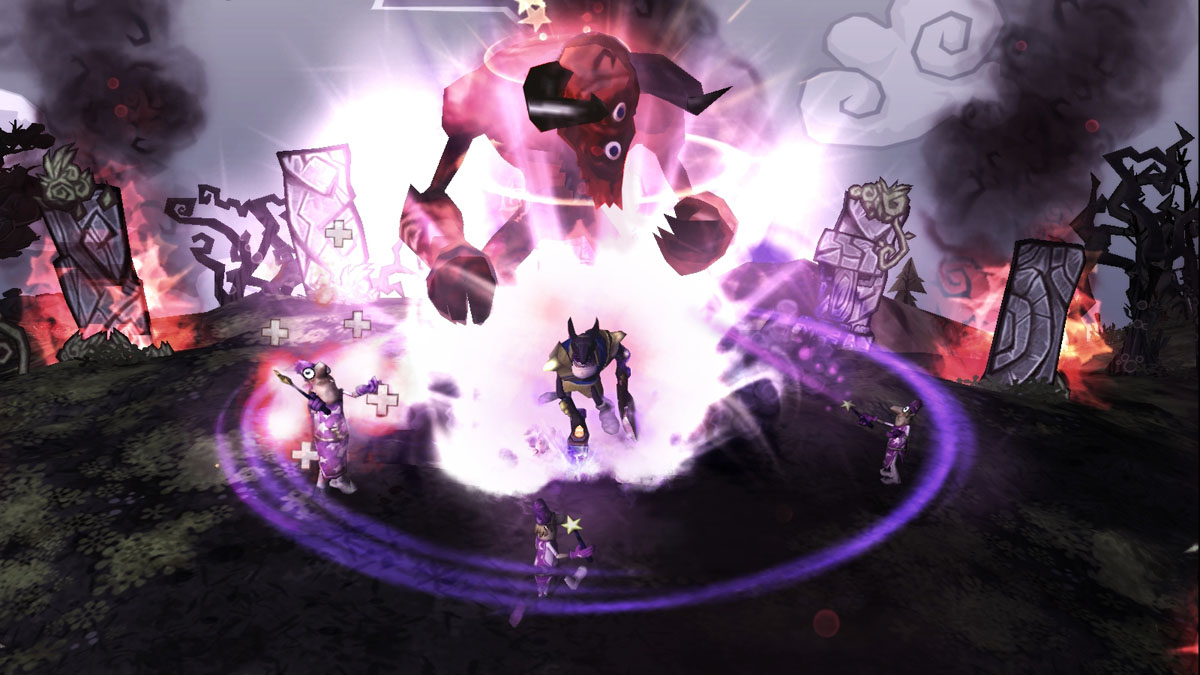 I didn’t get into DeathSpank initially. When you boot up the game, you’re met with terrible voice acting, and then you’re immediately dropped into sensory overload without any tutorial or much in the way of instructions. However, as I became more comfortable with the game’s mechanics and pacing (and, more importantly, as I realized you could mute all of the characters), I found myself liking it more and more. Every time I picked up DeathSpank, I had a better time with it than the last.

There’s also a co-op mode, wherein a second player joins you as “Sparkles the Wizard,” but it’s offline-only, I guess because nobody likes playing RPGs online with other people. I didn’t get a chance to test it out, because my fiancée, for some reason, didn’t feel like journeying the land with me in search of poop; but my understanding is that the co-op is much more Super Mario Galaxy 2 than it is Champions of Norrath anyway, so I guess it’s no big loss. I still don’t like this trend of offline-only co-op, though, mostly because I stopped living right next door to my friends when I stopped being a high school student. (I’m looking at you, Scott Pilgrim! First you captured my heart, and now you’ve broken it by not letting me play you with my BFFs.)

Sure, DeathSpank‘s gameplay can get tedious, since sooooo much of it is fetch quests, and sooooo much of it is “kill X number of monster” quests (actually, that’s about 95% of the game), but the things I was doing were so silly and the accompanying text so amusingly bizarre that I wanted to keep tackling every absurdist quest they gave me to see what would happen next. I played this game for 10 hours (not bad, for a $15 downloadable game), completing every single quest, and I want more. Luckly, the game’s Baldur’s Gate: Dark Alliance-inspired (/stolen) ending implies that there could be more DeathSpanking in all our futures.