Welcome to another new, and TIMELY!, edition of that ever-dependable fun bunch of words…THE THUMBS! (Of psychicality!) Where you learn incorrect and made-up information about upcoming games that may or may not ever see the light of day.

Waaaait, what?? I’ve missed HOW MUCH time since my last column?! What year is it? PLEASE tell me that my flying car still works!

Look, I don’t know what happened. Time sure flies when you aren’t thumbing things, OK?! But the magic thumbs that the world so dearly loves and NEEDS are back. So let’s just enjoy them, one and all!

Pretty sweet!! Another installment of the “things nobody even wants to do in real life” line of videogames. Now, it may just be me, but from the thousands of television-watching hours of my youth, I recall that babysitting is a difficult and unrewarding task, and that it’s impossible to find anyone willing to do it. Of course, that means it is a perfect fit for the Wii! Nothing is more fun than playing minigame after minigame simulating some of the greatest activities known to man, like…diaper changing, baby feeding, and baby-putting-to-bed-ing. A true BLAST of excitement from start to finish! How could this game fail? IT CAN’T! IT WON’T! 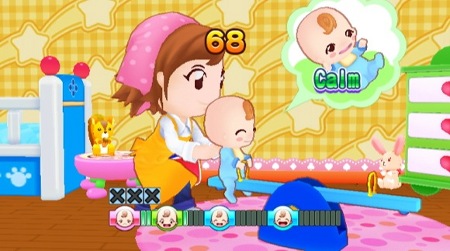 I am still checking into the rumor that the toy baby this game comes with is actually a real baby whom you are contractually obligated to babysit for one year’s time. (Note: I started this rumor. Right now.)

Finally, a game other than Guitar Hero or Rock Band that you can use that dust-collecting clunky guitar peripheral for! Now, with games like these, words like “unique” and “innovative” like to be thrown around. However! The game LOOKS just like any ancient spacey arcade shootery game, with fancier graphics thrown on top of Guitar Hero. WITH TIME-REVERSING ACTION. So I guess it has that going for it. With GameCola’s love of all things time travel, it might even become an all-time ‘Cola fave!

OK, I lied. I don’t really see that happening. But I’m sure I’m just not sophisticated enough to understand this artistic vision fully. 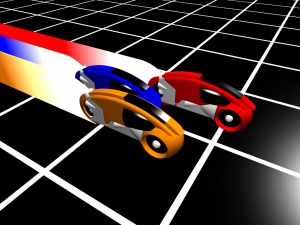 WHAT?! OH MAN! A Tron toy-model lightcycle! For the low, low price of $130?! SOLD! Who even cares what this game is! TOYS! RIDICULOUS COST! MUST HAVE!

I’m sure the rest of this Collectors’ Edition will totally justify spending all that money…ON THE COOLEST TOY EVER! Let’s see…well, you also get a shelf. That is totally worth the 70 extra dollars, right?! I mean, why buy another full game when you can have a sweet shelf…AND THE COOLEST TOY IN THE HISTORY OF THE UNIVERSE! OH MAN. Someone else buy one. WE NEED TO HAVE RACES!

Uhhh, anyway. This game is sure to be…glowy.

Kirby is BACK! And he is bringing the co-op! Oh that sweet, sweet co-op. Why art thou so elusive!

In a radical departure from making games about un-fun activities or boring minigames, the Wii seems to be bringing a beloved old character into a new and intriguing game genre. Whoa! BOLD! Will it work?! Who knows! But when you play mix-’em-up with Kirby, Paper Mario, and LittleBigPlanet…I’m sure the end result can’t be too horrendously bad!

Whooooooa now. How did a fun-looking new game that could actually be GOOD end up on this list?! I am shocked! In disbelief!! What will I do?! How can I ever recover from this.

Malicious is an actiony kill-lots-of-stuff game that promises…ONLY boss battles! NICE! Who wants all those boring parts in-between the boss fights, anyway? I mean, they just bore you to death and make re-doing failed giant-monster-killing missions tedious and unworthwhile. If videogames should be one thing…that thing is definitely worthwhile!! WE ARE SAVING THE DAMN WORLD! Every day!

Well, this concludes another edition of the (hopefully) newly active PSYCHIC THUMBS! I hope you enjoyed it. Next month’s edition is surely going to melt your eyeballs so hard with awesomeness that it may LITERALLY be the last thing you ever read! I know that sounds fun to me!! CAN’T WAIT.