Do you remember I MAED A GAM3 W1TH Z0MB1ES 1N IT ? The Xbox Live Indie Game in which you shoot zombies, while a laser light show plays in the background? Maybe this theme song will help jog your memory, because it’s pretty much the only reason anyone ever bought the game:

It’s true. $300,000. That’s a third of a million dollars, and at least twice what the PlayStation 3 cost at launch. It would probably take you over 10 years of working overtime and weekends to make that much dough, and this guy did it in, what, probably a week. At the rate GameCola’s currently generating ad revenue, it will take us over eighteen thousand years to make that much money, and I’m not kidding, because I just did the math.

So! It should come as no surprise, then, that a few other indie developers have decided to maek their own gam3s with zombies 1n them. I’ll be talking about a few of those games today, as well as a few others that have nothing to do with zombies, because BRAAAAAAAAAAAAAAAINS. Enjoy! 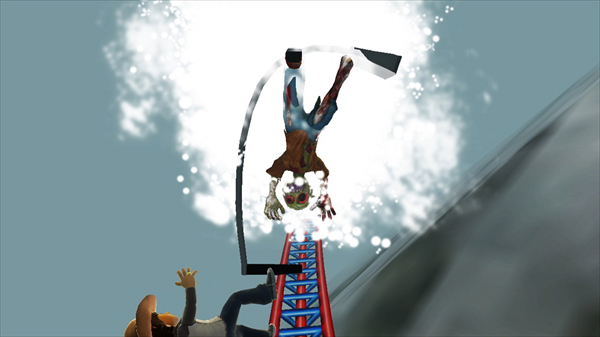 This game is a roller-coaster simulator, kind of like the ride-your-own-coaster mode omnipresent in games like Rollercoaster Tycoon, Theme Park, Theme Park: Rollercoaster, Tycoon Park: Themecoaster, and Cooking Mama. The only difference is that, in this ride, instead of just feeling like you could die at any moment, you actually will literally be killed, because a zombie will pop out of nowhere and push you out of your cart, which is THE ENTIRE REASON I’M SCARED TO RIDE ROLLERCOASTERS IN REAL LIFE; THANKS GUYS.

Here’s how the game goes down. At first, it just seems like a normal, vomit-inducing rollercoaster. It goes up; it goes down. Whatever. It does this a few more times, and then all the sudden WHAM! ZOMBIE! You get knocked straight out of your cart by the very first zombie you come across, and then go tumbling down a mountain, because I guess this roller coaster was built on top of a mountain. You start over.

OK, you think. Now I know when he’s coming. Now I know exactly when to hit the punch button and then WHAM! ZOMBIE! You fall down the mountain again.

You get on again. You test out a few of the other buttons, looking for one to make your character shout “Help! Operator! There are zombies on this roller-coaster!” You never find one, and then WHAM! ZOMBIE!

You get on again. You swear you heard the zombie laugh that time. This is getting ridiculous. I still haven’t gotten past the very first goddamn zombie in this game, and then of course WHAM! ZOMBIE! You get knocked off again.

You get on again.

WHAM! ZOMBIE! You still can’t get by the first one.

WHAM! ZOMBIE! You still can’t, even though your timing was perfect.

You know something? I don’t think there ARE any other zombies in this game. I think there’s only the one, and it’s completely impossible to get by him. It’s gotta be some kind of psychological study: “How many times will the average gamer run head-first into a zombie before just giving up?”

And speaking of answers… 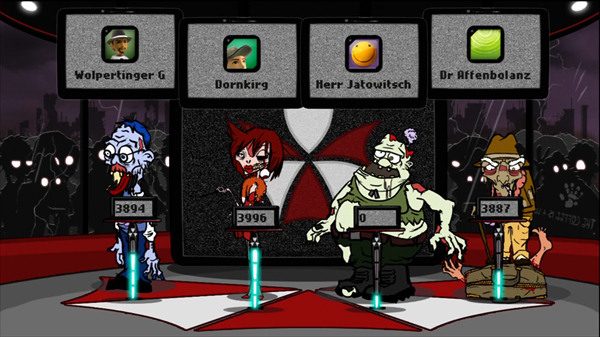 I love trivia games (certainly more than I love STUPID ROLLER-COASTER GAMES), from Jeopardy on the NES (a runner up in my own top-50 games of all time list) to You Don’t Know Jack (which was actually on my top-50 games list). I enjoy them because they’re basically the only videogames I can ever actually beat other people in, since they don’t require any gaming skills, just good test-taking skills.

In Quizocalypse, you and your friends play as a bunch of zombies competing on a gameshow to win brains. You answer trivia questions about nerd pop-culture (I saw questions about Lord of the Rings, Evil Dead, and Dragon Ball Z) for 13 rounds, which is actually a pretty great idea. Why aren’t there more trivia games focused on nerd trivia? Who do the developers think are playing Xbox Live, anyway? It isn’t the grannies who only watch Deal or No Deal for a chance to rub Howie Mandel’s impossibly shiny head, that’s for sure.

By the end of the game, I had amassed over 13,000 brains. If I had a dollar for every one, I’d still be no where near as wealthy as the guy who made I MAED A GAM3 W1TH Z0MB1ES 1N IT. (I’m just going to keep harping on that, so the rest of you can feel as unsuccessful in life as I do.)

And speaking of brains (or a lack thereof)…

So Many Girls, So Little Time 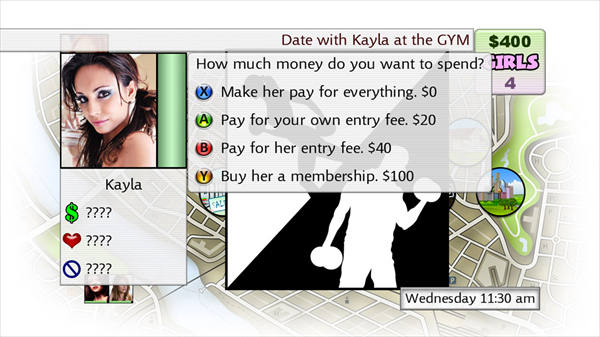 Another day, another incredibly offensively sexist girlsim by Silver Dollar Games. From the title screen:

Want to date all these girls? Done, your wish is granted! Piss one girl off and you’ll lose them all.

Sounds like someone’s really taken the Spice Girls’ advice of “if you wanna be my lover, you gotta get with my friends” to heart.

No, but seriously, this is a game about juggling your relationships with as many girls as you possibly can. Taking them all out to dinner, to the movies; buying them things; etc. In the game I played, the entire point seemed to boil down to this: Spend literally all of your time and money on your harem of girls, and they will love you forever. I just kept saying things like, “YES, spend four hours talking to her on the phone; YES, buy her fifteen lobster dinners, whatever.” I never once lost a single girl.

The only girl who even got mad at me was one I took out drinking this one time. To wit, I spent over $200 on feeding her alcohol, and she never turned down a drop. Then I tried to broach the subject of “drinking” with her, thinking this was a subject in which we clearly had a common interest. “Yuck!” she said. “I hate drinking!” I lost 20 relationship points for that faux paus, which is a French term meaning, literally, GIRLS ARE STUPID.

And speaking of vegetables… 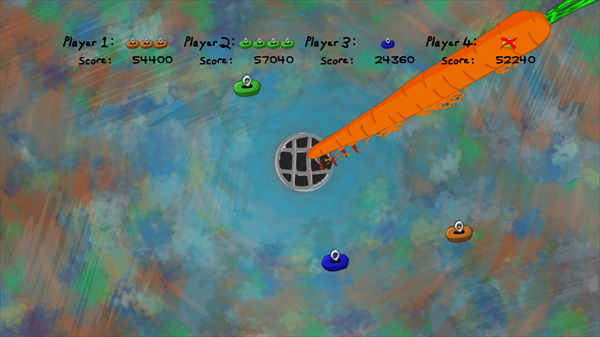 This is a game in which you play as, I believe, a potato with a corkscrew in it, shooting laser beams at various fruits and vegetables before they can be sucked down a drain, while crappy techno music (which is, by the way, a redundant phrase) plays at you in the background. The game controls just like I MAED A GAM3 W1TH Z0MB1ES 1N IT, (or, more accurately, whatever game I MAED stole its controls from), except that as you progress in the game, your laser beams start to get sucked down the drain too, making it more challenging to zap poor Bob and Larry. Also, you sometimes get sucked down the drain, too, which you don’t want to happen, I guess for the same reason you don’t want anything else going down the drain. What reason is that, again? Maybe it would be easier to purchase a garbage disposal than to disintegrate everything via potato.

Anyway, it’s pretty weird. One one point, I was being attacked by a giant cheese monster with hands, and I had to call my fiancee over for assistance. (She loves it when I call her over to play games for “Minus the Pudding”; I can tell by the way she sighs so loudly.) “Is this what happens in our sink at night?” she asked. Later in the day, I saw her scrubbing our sink down with a potato. “Just to be sure,” she said.

Just like I MAED, this game is pretty unfun in single-player, but it’s a fantastically insane fustercluck when you’ve got four people all pretending to be vari-colored potatoes trying to rid the world of vegetables. Wart would be so proud. 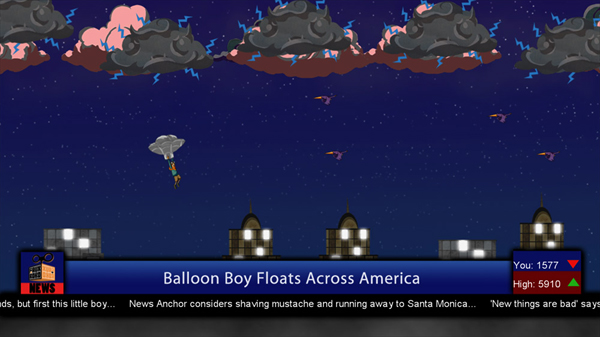 I bet you can guess what somewhat-current event inspired this game. However, Balloon Boy isn’t a game about being told to hide in the attic until you’re allowed to come out for the cameras, at which point you’re expected to throw up; rather, it’s actually a game about flying on a balloon. That’s crazy.

It reminds me a little of Balloon Fight in a way, except that you’ve only got the one balloon, and you’re instantly killed if you run into anything, such as birds, clouds, or helicopters that are covering you for the local news. Headlines scroll at the bottom of the game while you’re playing, saying things like:

BOYS’ PARENTS CONCERNED THERE IS NOT ENOUGH NEWS COVERAGE

BEST GAME EVER ANNOUNCED, AND YOU’RE PLAYING IT!

YOU WANT TO BUY THIS GAME.

YOU SHOULD TOTALLY BUY THIS GAME.

Supposedly, the self-promotion headlines go away if you actually do purchase the game…but I kinda don’t want them to. Is it wrong that I want to play this game for the headlines alone?

In conclusion, you will never ever be as successful as the guy who made I MAED A GAM3 W1TH Z0MB1ES 1N IT. Isn’t that depressing?

Before I start describing this game, I must address the people who have never heard of it. First off, get out from under yer damned rock. Secondly, it is not called 'Neverwinter' because it is never w ...