Bloody physics. They’re everywhere. I eat a sandwich? Physics. I go for a crap? Physics. I construct a complex system of weights and pulleys? Physics! And now, as if we don’t all have to put up with enough physics in the day-to-day, they’ve only gone and put them in a platform game.

Yes, Gish is absolutely swimming in the poxy things. Everything he does takes into account a rather nuanced physics system, allowing for convincing interaction with his surroundings. Gish (for it is he) can take on several “states.” For example, by becoming sticky he can cling to and climb walls.  By making himself solid, he can crush enemies. Lastly, by making himself slick and slippery, he can make his way through tight passages. This is a slim repertoire of actions, but it allows for some surprisingly in-depth logic puzzles. 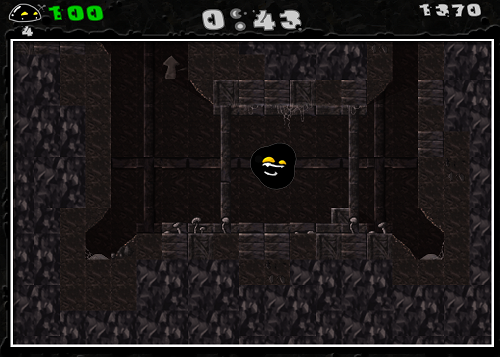 However, in-depth does not necessarily mean good. Controlling Gish is a constant struggle, his unwieldy form resisting all attempts at progress with a stubborn grimace. Getting the little black ball of tar to do anything efficiently is a chore, with the physics engine never quite behaving the way you think it should. Frustration abounds as the mere traversal of a slope becomes an ordeal, and every situation rapidly devolves into frantically shifting between states, desperately hoping for some sort of consistency that never materializes. Sometimes landing on an enemy will kill it, sometimes it won’t. It’s quite common to get stuck in a corner by a tiny villainous creature, slowly and helplessly watching your health ebb away.

The frustration of this is compounded by the game’s ruthless checkpoint system—there aren’t any. You have to beat each level in one go, and some of them are extremely cruel, with large crushing blocks coming out of nowhere and wiping out a life in one fell swoop. To make matters worse, you have limited lives, the loss of all of which means you have to start over from the beginning of the current world. Yes, world—if you were to die on stage 2-3, for example, you’d have to start over from 2-1. Hardcore, yes, but one of the less welcome qualities of retro gaming.

Cosmetically the game isn’t up to scratch. The music is unmemorable, though certainly effective at building an atmosphere. Sound effects are uncommon and understated, and could have done with a little juicing up. Graphically it’s extremely samey, with almost no variation between levels besides a slightly different shade of grey on the platforms. It’s far from immersive and barely stimulating, as if the developers didn’t want it to be fun. 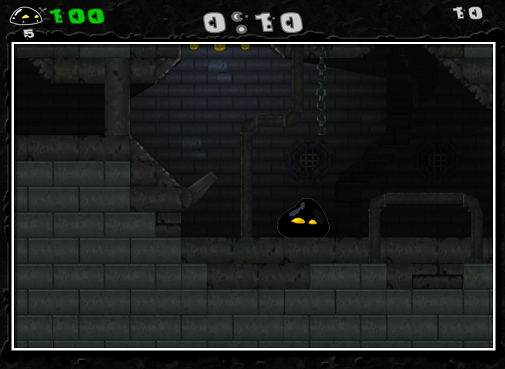 I struggled to get through this game, and struggled to write this review. It shows, doesn’t it? Gish is in every way uninspiring, and my apathy toward it is ably reflected in this rather brief review. I’m not sure I even feel like giving it a score. Gish doesn’t try, and I don’t see why I should humour it with my numbers. I suppose I must, though, as the score is part of the review template. This review is awful. It’s just running thin with repetition. 568 words. Is that enough? It’s the same thought process that must have gone into making Gish. Will this do?  Yeah, just about. It’s clearly only mediocre, but hey, it’s indie and a 2D platformer. That’s enough for at least a cult following of deluded gamers pretending it’s the best thing since sliced Braid.

First, a video about Breakfast: The Game. Next, a reality TV show about gamers.