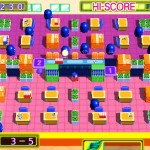 There once was a man named Pac-Man,
And rehashing old games was his plan.
There was no aim for fun,
And his games all bar none,
Were destined to enter the trash can.

But Arrangement is not the same,
And it does not appear to be lame.
It still rehashes and repeats,
But hold onto your seats;
It is totally worth owning this game. 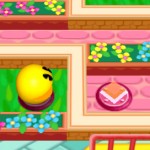 The replay value is low,
‘Specially when you know where to go.
You can beat the game really fast,
Barely an hour has passed,
And only have a high-score for show.

But this game remains fun either way.
Though you can beat it many times in one day.
To prove I rule the roost,
I have done that to boost,
My best run on the high-score display. 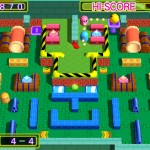 The visuals are really enticing.
Smooth and shiny, not sharp or dicing.
This nice geometry fights,
The need to use sprites.
If the game is a cake, they’re the icing.

The overall presentation owns,
Although from Pac ‘n Roll it loans.
All its nice visuals,
Have been lifted in full.
But that is my one single moan. 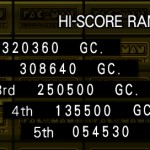 As Arrangement stands tall and loud,
Other Pac-Man games are not so proud.
It contains so much flair,
And great gameplay is there.
The game itself is well endowed.

But should you just take my word on this?
I could just be taking the piss.
So here’s my final plea,
Please take it from me:
This is the one Pac-Man you shouldn’t miss.

Pac-Man Arrangement can be found on the Namco Museum Battle Collection on PlayStation Portable and Namco Museum Live Arcade on Xbox 360. It is also available as a standalone game for the iPod Touch, iPhone, and iPad, titled Pac-Man Remix. I thoroughly recommend the PSP version, as it is the superior version and contains versus and co-operative modes that are not in the other versions.

Joseph is irrationally upset, Jeddy struggles with being a strong, independent woman, and Anna finds her newest, truest love.