BREAKING!: Tofu Boy will be added as a downloadable character in the PC version of Super Meat Boy! Classy response, devs.

ORIGINAL POST: That sure didn’t take long. About a month after Super Meat Boy was released for XBLA, PETA made it the target for its latest parody Flash game. PETA, the organization that tried to convince people to start calling fish “sea kittens,” is no stranger to ridiculousness or videogame parodies. You may remember that they’ve previously released a parody of Cooking Mama in which the eponymous “Mama” is a bloodthirsty maniac, and a parody of Mario called Super Chick Sisters, in which you need to rescue Pamela Anderson from Colonel Sanders (I’m serious). 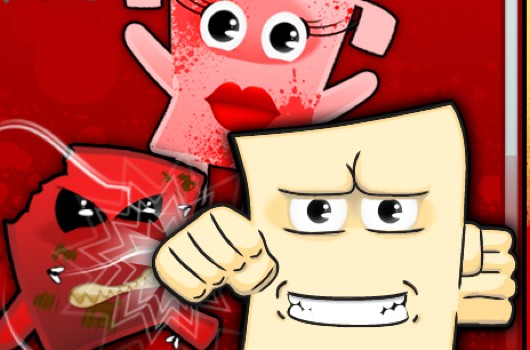 I can’t tell if this is hilarious or awful, but their new game Super Tofu Boy tasks players with rescuing Bandage Girl from the evil clutches of…her boyfriend, Super Meat Boy, because meat is bad, and tofu is good. The game plays pretty much exactly like Super Meat Boy, with you dying all over the goddamn place until you can reach Bandage Girl, only to see her whisked away yet again.

Periodically, the game gives you helpful hints for beating it, like “Tofu Boy is not only sexy, he tastes good, too,” and “Vegetarians make better lovers,” because those are definitely hints. You can check out Super Tofu Boy for yourself here.

Discussion topic: I still can’t tell—this is funny, or godawful?

Discussion topic #2: What does Super Meat Boy taste like?

Note: Honest to God, if we told you why we're posting both versions of the Mega Man X review by Meteo X, we'd be incarcerated on the spot and flaming ants would march into our anuses in what could be