I want you to play this game so badly, all the way from beginning to end. I want to sit next to you while you do it and talk about the experience the whole time. I want to post on every message board. I want to put fliers in people’s mailboxes. I want to skywrite. I want to send smoke signals and drum out Morse code. I want to text and tweet and scribble and yell and chant and scream at the top of my lungs, For the love of all that’s good and decent in this godforsaken world, put down CoD:BlOps for five fucking minutes and give this game a shot!

Alan Wake. Although you most likely haven’t played it (judging by sales numbers), after six years you have to have heard of it by now, one way or the other. Long, tortuous development cycle. Switching from an open world to a more focused, character-driven action-adventure thriller. From the makers of Max Payne. Ringing any bells? Well, give me five minutes and I’ll make a believer out of you.

Alan Wake takes a while, but it needles its way under your skin. It creepy-crawls, slithering and twisting, until you are constantly thinking about it. You don’t know how it happens, but it’s like developing an obsessive-compulsive crush-type thing with that terrible actress Rachael Leigh Cook. She’s just so damn cute, and you, you’re just out of college and you’ve got this thing about hot chicks with straight, dark hair, and your friends say things like “you fish out of a shallow pond” with your type of women, but fuck them; you just don’t like curly blond-haired chicks, right? And then, right at the height of your obsession she starts tanking every…single…goddamn movie she’s in, you know? It’s like it’s all downhill from She’s All That and you’re just like, C’mon Rachel Leigh Cook, for fuck’s sake try and make something good please, I’m so tired of defending Get Carter and Antitrust to my friends! They’re terrible, terrible movies! Gaahhhh!!

So, Alan Wake is sort of like that. It doesn’t reach out and grab you the second you start playing, although, as a lover of adventure games, the opening scene of you and your wife on the ferry heading into the town of Bright Falls is something approaching poetry. The modeling in the game is just absolutely gorgeous; every corner demands to be explored and documented. You marvel at all the work that went into things the designers knew you just might never even see—interiors of un-drivable background cars, trees in the distance. 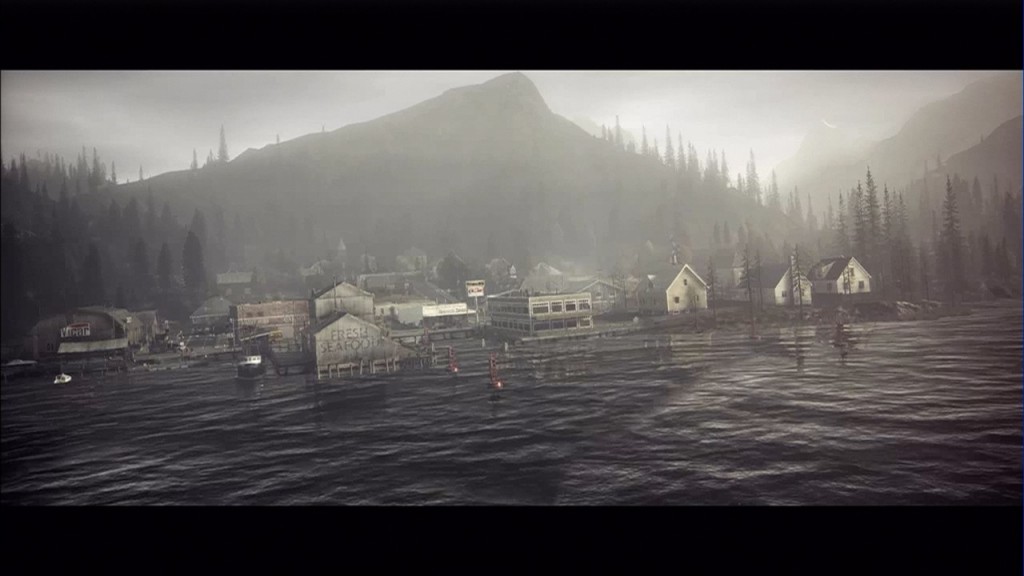 The camera itself demands notice because it’s constantly in motion, swooping through trees and around buildings, up over mountains and racing along rivers. The actual mass of the game is astounding. You can tell right away this thing used to be an open-world game, and as more and more time went on the designers started reigning in their scope, focusing their ideas and world down to a manageable level. Playing through the beginning of Alan Wake, after that frankly awesome ferry ride in, is something of a letdown. There’s a tiny bit of exploring, a great setup involving your bitchy, nosy wife getting dragged out of your cabin while you’re in the midst of the world’s biggest hissy fit because she tried to force her help on you. To be honest, both the characters of Alan and his wife Alice are assholes. Alan is selfish and Alice is just a pushy know-it-all. You then get some “meh” combat, a lot of forest trekking, and you’re blundering all over the place looking for fucking thermoses and thinking to yourself, “Well, OK then. 7 outta 10 for this bad-boy.” And to make matters worse, Alan’s dipshit manager Barry shows up to help and he’s such a fucking jerk at first. You’re about one chapter away from permanently hitting the power button and moving on to BioShock 2 because that’s been sitting in your pile of shame forever.

But then. But then.

Not to get too metaphorical, but then Alan Wake just blossoms. It explodes. You finish a chapter and get the whole “previously on Alan Wake” recap. You get a whole hell of a lot more story that keeps pushing you forward, and finding the thermoses isn’t such a chore anymore because this world has been modeled so elegantly, so masterfully that you WANT to explore every corner of it. Somehow, someway the search for your wife becomes massively more significant, and Barry…holy shit, Barry becomes one of the most well-written side-characters I’ve ever encountered in a game. He’s loyal—he doesn’t leave your side in the middle of a bunch of Taken ripping people away and dropping tanker trucks from the sky all around you. He’s funny, he’s got a personality, and you feel so much more like you’re not alone in this fight; you’ve got a pal who’s got your fucking back, man. Just wait until the scene where you have to climb a ladder onto a barn roof and Barry, who’s been carting around this cardboard stand-up of Alan, is on the ground with it. If you look at him, he holds the stand-up in front of him and starts mimicking your character with such uncanny hilarity, I actually quit and went back to my previous save to watch it again. “Ohh, look at me!” he says, “I’m Alan Wake! I’m always intense and moody; it makes me very mysterious and attractive. I take my friend Barry for granted!”

You’re burning Taken to the ground with flashlights, flares and flash bangs, then blowing their asses to hell. They spook the shit out of you with ultra-eerie, echoing voices stating mundane things in scary-as-fuck ways. “Your driver’s license has been suspended!” and “I can give you a tow but it’s going to cost you!” Brrr! I jut got shivers. 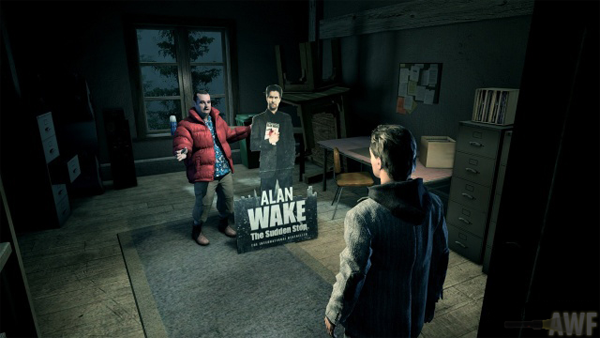 And really, in the end, it’s all in the details. The way the story keeps flowing and doesn’t let you down; the way you can kick on the jukebox and listen to “Coconut.” The absolute beauty of Bright Falls and its inhabitants. Running through the forest with three or four Taken in hot pursuit, one with a chainsaw, and you see a light up ahead. Salvation! But the scream of the damned is right behind you and your stamina is running out…

You play until you finish a chapter, turn off the Xbox and go to bed. To sleep, in theory.

You find yourself thinking about things. About the story, and where it’s been going. About the total kick-ass battle in the farmyard on the stage for the rock band Old Gods of Asgard with the dragon’s head pyrotechnics (trust me, it’s fucking kick-you-in-the-face awesome). About how you hope Barry’s not really dead, is he? He can’t be, right? He made it into that cabin before the Darkness got him…right? And speaking of that, how cool was it when the Darkness whirled in and destroyed that whole campground like a tornado from hell?

Then you’re back up, out of bed and onto the Internet. You wonder what other people think about the story, and how they interpret the in-game novel. Maybe you’ve just finished the game and you want more, please. So you download and watch the six-part prologue Bright Falls, and fuck me, that is sweet! Suddenly you see this videogame town in real life, these people who were only rendered before suddenly made real. And it’s so cool, like Twin Peaks but almost more surreal. And before you know it, hello downloadable content because I need more goddamnit! And all of your friends look at you weird, because really Rachael Leigh Cook hasn’t been in a movie in forever, but you? You don’t care. You’re hooked. Bright Falls has you. Alan Wake is for real. So, consider this my Facebook post on your wall. Read the book, watch the prologue, play the game.

So I frequent this blog that posts retail horror stories, and I figured, hey, why not share the awesome. Here's a story I saw a few days ago by a GameStop clerk (source).I manage a video game store. N