The classic PC game Wolfenstein invented and revolutionized the first-person shooter genre. But, in recent years, Wolfenstein has become a series of games that imitate other games, instead of coming up with something new. Here at GameCola, however, we like to do new things. So here’s a review of some poker game or something. See also: Stuart Gipp’s review of Poker Night at the Inventory. 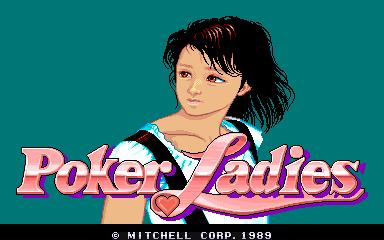 Man, I’m getting all excited just thinking about…oh hell. I could get more stimulated watching wet paint dry than playing this supposedly sexy game, to be perfectly honest with you. That smooth yet constant line of wet paint running slowly down the wall, solidifying into a stunning, crusty glob. That image is positively more erotically captivating than this shite. Poker Ladies is no hotter than the barren ice wastes of Hoth. I’ve seen playing cards more exciting than this, and yes, I am talking about the Nintendo playing cards.

The only way Poker Ladies could ever turn me on is if it were actually a good game. Tight controls and replayability are sexy. Poker isn’t. When I hear the word “poker,” I think of that old joke, “Poke her? I hardly know her!” And that’s about it, because I’ve never understood poker. So why did I even play this?

Poker Ladies is one of the least enjoyable games I’ve ever played, based on poker or otherwise. This terrible and truly unremarkable game contains a selection of Asian women, drawn in pixel-art. They tend to repeat themselves, but at least they have the decency to speak the American language. Too bad they’re into poker. 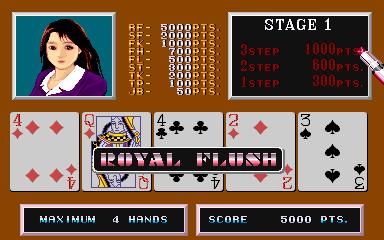 That’s a strange-looking royal flush. Did someone cheat?

The goal is to win a hand (again, I have absolutely no clue what that means), and if you score high enough, off come the girl’s clothes. At certain point intervals, you strip and eventually “get to play with” each of the girls. “Get to play with” stands for many things in Poker Ladies, none of which involving fucking of any kind.

They range from breast massaging to shining a flashlight at one of the lady’s nether-regions. These are probably the best (private) parts of the game. But to be blunt (like the trauma from getting thwacked in the face by a hardened member), these parts of the game aren’t really all that special anyway. After all the poker sections, which are just the means of getting there, the “playing with the girls” sections are completely boring and unsatisfactory.

But like I said, and am forcibly reiterating: these scenes are hardly worth playing for. Unless you get turned on by pixel-art Asian women, you’re not going to find much to get hot and steamy over in this package. Also, I don’t like poker. Just thought I’d make that obvious if it wasn’t already. 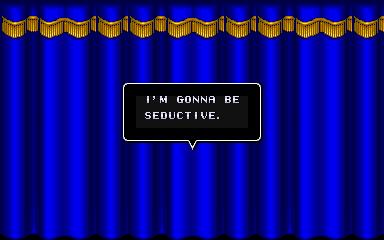 Go on then, do your best. 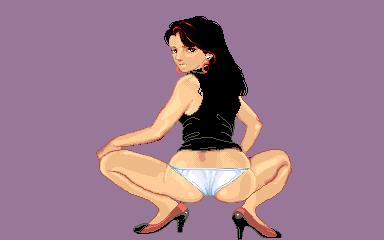 Adding to the truly cringe-worthy and overly “pervert without a cause” nature of this outrageous filth, there is terrible and forced voice acting in fuzzy and inaudible quality that attempts to lure you into its loving world. The biggest problem with this dialogue is that I don’t want to be told that I’m “such a dirty old man,” because I am in my early twenties. The game naturally presumes that you are a lecherous 40-year-old man suffering his mid-life crisis, with a hard-drive full of pornography and Photoshopped pictures of Emma Watson. “You’re such a dirty old man.” Oh yeah, well, you’re…you’re made of pixels, yeah!

Did you see that!? I totally owned that fictional character in an arcade game from 1989!

As if the game didn’t blow hard enough, the finale is thoroughly disappointing: the girls all just put their clothes back on. And they’re not interested in one final, potentially game-saving poly-amorous 11-person kink, either. Your final reward in the game is to see all the girls, once again clothed, saying good-bye to you. Truly anticlimactic, and shockingly abrupt. The game ends with the screen turning to a sepia tone, implying that a photograph has been taken. Then, so long as you have credits in the machine, the game restarts.

You see, what I’d have done is made the one on the bottom right watch the whole thing whilst…*ahem* yes, the ending is disappointing. A shitty Polaroid. That is all you get for cheating your way through winning your way through this monstrosity. This game got my repressed sexual hopes up, all for nothing! To hell with you, Poker Ladies!

To conclude this little venture, Poker Ladies is a straight flush…down the toilet. It just isn’t a good game.

Not even for hand shandies.

So I was trying to come up with an idea for Dear Readers, and I thought to myself, "Wouldn't it be great if I could melt people's faces together? To create one freak-face?"