It’s been several months since my last “Flash Flood” column, but believe me, I am still alive. That’s why it’s appropriate for me to make my long-awaited comeback now, in the wake of another long-awaited comeback—one whose popularity almost guarantees that you’re too busy researching combustible lemons to actually be reading this right now. I am, of course, talking about Postal 2.

For a while, we didn’t have a sequel to the wildly popular game about an unwilling test subject making her way through a series of mind-bending puzzles while being coached/taunted/fed deadly neurotoxin by an entertainingly psychotic computer. While the world begged for a new installment that would expand the Internet’s meme vocabulary beyond “The cake is a lie,” Valve instead turned their attention to not making Half-Life 2: Episode 3, which is why the Flash game makers of the world took it upon themselves to make their own sequels totally rip off Portal.

4 = This game is great. It’s so delicious and moist.

2 = It’s hard to understate my satisfaction.

1 = Go ahead and leave it. I think you’ll prefer to stay away.

0 = Tear it to pieces. And throw every piece into a fire.

This month’s theme: Learn how to make inferences. Jeez, I need to spell out everything for you people.

Interface: Beating the keyboard with your fists; throwing your mouse across the room

Description: What Portal would have been like as a 2D platformer, minus the atmosphere, humor, fairness, charm, and functional controls. Review: Dear Diary: Today I played Portal: The Flash Version. I stopped having fun after things started killing me before I could get the controls to respond. That was about five minutes into the game. Half an hour later, the game began to direct some of my portals to plop me out of a random ceiling on the other side of the screen, or toss me off the map altogether. With this kind of frustration, it’s no wonder my character continually threw himself into bottomless pits without me telling him to run in that direction. At least there wasn’t any kind of engrossing atmosphere or periodic humor to maintain my motivation to play, or else I might actually have liked the game enough to feel conflicted right now.

Verdict: 1/5: The game loses a whole point for the fluctuatingly laggy/oversensitive/unresponsive controls, and the game also loses the whole point of what it means to bear the Portal name—there’s so much that’s missing. It doesn’t feel like it’s out of beta; its release is a crime.

Description: It’s a Portal parody, in the style of Egoraptor 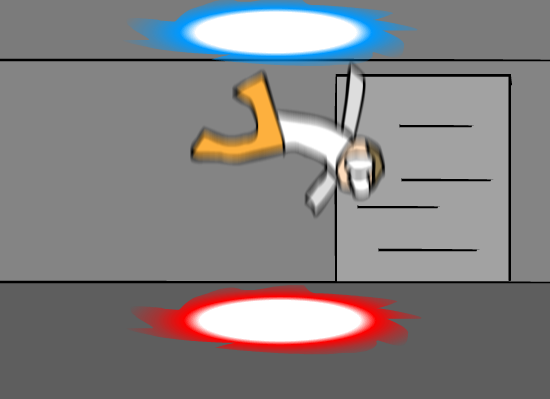 Review: I must have thought this was funny the first time I watched it, because I have no other idea as to why this is on the list.

Verdict: 2/5: It’s a little gross, but maybe it’ll provide a laugh or two. Watch what you must, because you can.

Description: Die repeatedly in an attempt to escape from Aperture Labs. It’s like Myst-meets-Super Meat Boy, except not in any way that makes the game at all like Myst or Super Meat Boy. 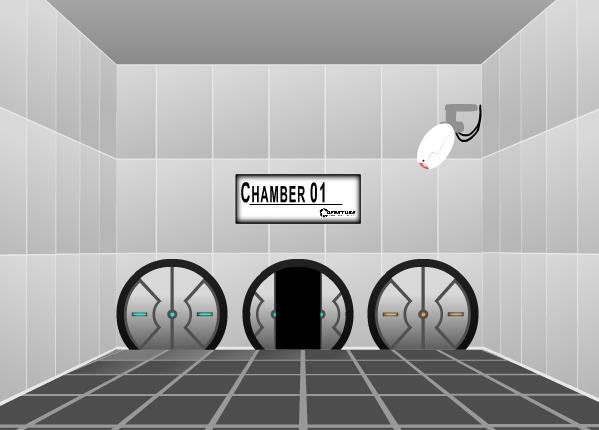 Verdict: 2/5: It’s decent enough if you want to waste your time; I just was hoping for something more than a waste of time. But there’s no sense crying over every mistake; I just kept on playing ’till I needed a break.

Description: YOU are applying for a position at Aperture Science. YOU must undergo a personality test and a series of generic minigames. YOU are probably not qualified for the job. 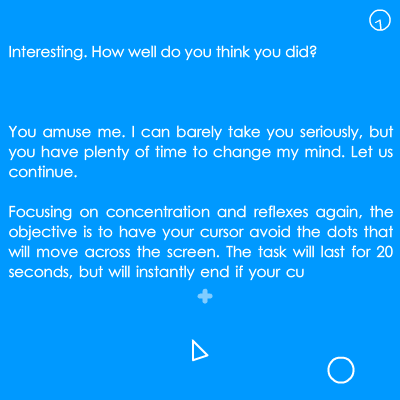 Review: You can tell that the creator put a lot of care and effort into this game, which plays a lot like a dating sim with the goal of landing a sexy, sexy science job. I, uh…y’know, I don’t play those kinds of games, so this isn’t all that much up my alley.

Verdict: 2/5: It’s really more like a 3/5, but there’s nothing about the game I particularly crave. I mean, I’m not even hungry. I’m being so sincere right now.

Description: Portal is not a violent game (aside from the parts where you get shot to death by turrets and murder a computer), but if it were, it might look something like this, if it were a collaborative video involving stick figures. 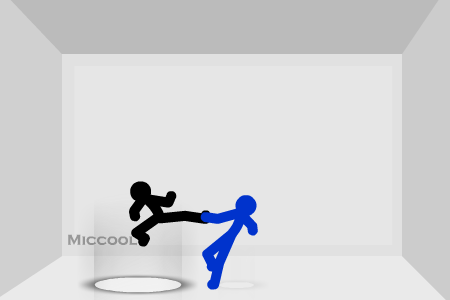 Review: Though a smidge repetitive, it’s funny and creative, which is more than I can say for this sentence.

Verdict: 4/5: A fine video that’s almost as elegant and refined as…I dunno…maybe a geisha? THAT WAS A JOKE. HA HA. FAT CHANCE. Unless the geisha is a collaborative video involving stick figures.

Golly, is it over already? Wow, writing goes so quickly when half your article blatantly rips off someone else’s song lyrics. The reviewing gets done, and you end where you’ve begun: at a ref-er-ence to “Still Alive.”

Yep, Nintendo is making another 3DS.