Even delicious violence can become moreish and sickening. Gore-feast Kane & Lynch 2: Dog Days suits this category the same way the perfect cup of coffee suits Dale Cooper. Being brutally visceral and disgusting, Dog Days is clever, whether intentionally or unintentionally so. In this previously nerd-exclusive industry, violence has become commonplace and blood is spilled by the pint. I am absolutely glad that there is a game that exaggerates every little detail of what has brought the games industry to its untimely death. If this is what Dog Days has set out to do, then well done. But even if Io Interactive is aware of how accurately they have described the downfall of the action shooter, this does not make the act of such ugly, cold-blooded execution forgivable. 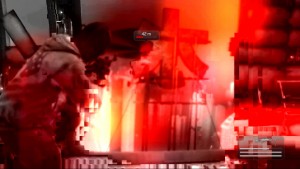 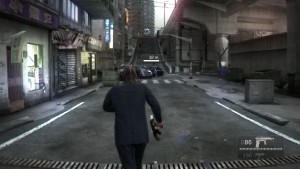 I found myself only loosely connected to the main characters, who have all the personality of garden peas. Kane is an incredibly fussy prick who cares only for money, with the flimsy excuse that he has a daughter who he was never there for. He was the only character in Kane & Lynch: Dead Men to have a real back-story. For some reason, he has a distinct lack of character in the sequel. Lynch is a far more rounded character in this game, not really being well detailed in the one prior. Instead of being some random lackey with psychological problems, he now has a girlfriend and has even rebounded from his drug and alcohol abuse. But despite this newfound brain evolution and developed sense of worth, one thing goes to shit and Lynch immediately blames Kane for everything.

The result? The two of them bicker at each other like stupid kids. Throw in an f-bomb every three seconds, and you’ve got the script nailed. 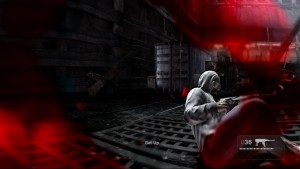 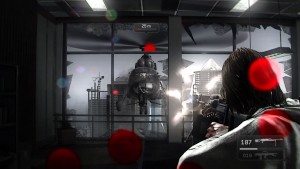 Besides offering childish behavior from two fully-grown men, The Legacy of Kane & Lynch 2: Soul Rover will also adequately fulfill your dark and twisted need to see blood flowing from open wounds. Whenever you feel yourself needing some gornography, you haven’t got far to look whilst within this game’s cover-shooting combat. The whole product sports visual aesthetics that mimic online execution videos, showing us a horrific cosmetic style that appeals to your morbid curiosity, but also makes you sick from your throat all the way down to your bowels. All of these post-processing effects used to generate this style can be turned off if you disagree with them, but doing so may highlight how ugly the game is underneath, so it’s better that you don’t. 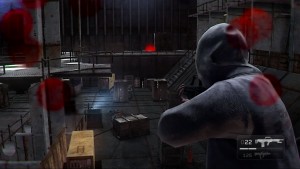 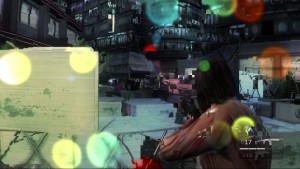 Although, what I saw the other day made me sick to the teeth. A mother buying Call of Duty: Black Ops for her son, clearly in his young teens and capable only of forming sentences punctuated with swears. He then proceeded to empty his bladder onto a poor homeless man, steal all his change and run into an alleyway, where he scored the prize of nine kegs of coke after playing blackjack with an aardvark.

What is the world coming to, eh? 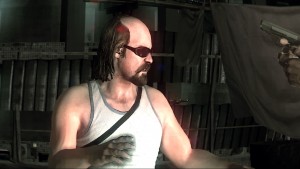 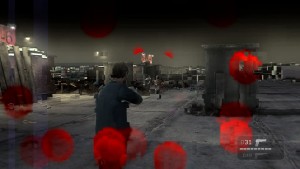 Disappointingly, Kane & Lynch 2 finishes before it has really ended, like most games nowadays. After a massive helicopter shoot-out and a skyscraper decimation run, you expect to see an ending where everything is resolved. Instead, the game carries on. This would be much more acceptable if the final chapter didn’t completely drag the game downwards. For starters, control is switched from Lynch to Kane. All the cover-aim-shoot mechanics and gunfire no longer work properly, and the hit detection is so impossibly bad that you cannot hit your target unless you fire five feet away from it.

How they could turn a generally playable game into a disaster is completely unimaginable, but Io Interactive has managed it. The final level reeks of shite. The controls suddenly suck, the cutscenes are primitive, the ending isn’t much of an ending, and Kane sucks! Why Kane!? Please note that, in the second screenshot below, this is what you actually see when trying to aim around corners as Kane. That’s right, you get a face full of the obstacle, not what you’re actually aiming at. (No, not the first screenshot. The first screenshot is Kane absolutely naked. Draw your gaze away from the censored penis, which looks like a white letter “y” upside-down. You can’t unsee it now.) 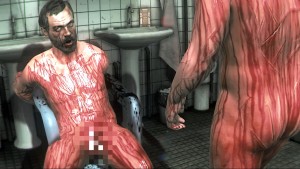 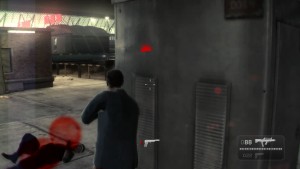 One cannot help but be absolutely shocked at the brilliance of Dog Days, especially when lined up alongside its antecedent cousins, Army of Two: The 40th Day and 50 Cent: Blood on the Sand. Tastelessly violent and repulsively disenchant, Dog Days will absolutely appeal to those amongst you who have no consideration for human life or morals of any kind. You will be attracted to this game, much like a moth to a Bunsen burner, if you love terrible, horrible things that just plain should not be. It just so happens I’m exactly that not-so-well-oiled and completely desensitized gamer that Dog Days is seeking in its “Lonely Hearts” ad. The disgusting torture of those who have done nothing wrong just seems like an everyday occurrence to me (funny that). The game just doesn’t affect me at all in the way that it sets out to, and I would be disappointed about that, but I understand that Dog Days is trying its little arse off to make me feel sickened and insulted. I would like a game to try going one step further, and really test the limits of game ratings classification. Kane & Lynch 2 is a step in the right direction for those who believe that all videogames, even Super Mario, should be unnecessarily brutally violent and fucking wrong. 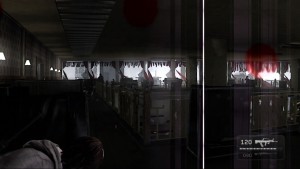 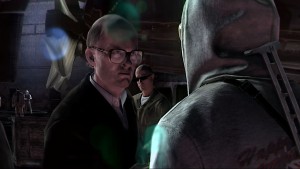 There were people who were calling Dog Days the worst game of the year for 2010. I can see where they are coming from, but I also can’t deny the game its well-deserved respect for the things it does right. Albeit the game doesn’t deserve that many accolades, but as a game of its type (which are boring from the first moment), I still managed to play through the whole thing. Reviewers complained that the game was short, but I spread it out over a week and found it fantastic, just the right length for the occasional blast. As far as games go, Dog Days does what it says on the tin, and that is all you can really ask for.

Of course, I’m basing my opinions on the game costing me significantly less than it did when it was released; I got it for less than a tenth of its original retail price. I think that for seven dollars, if you don’t pick this game up, you are missing out on some good fun.

Guest review by: Geoff Osman Project Gotham Racing 2 (MXB) Hey bitches! I'm back from the dead! To celebrate this wonderful occasion let me review a game that has been dropping my grades like crazy si