Let us begin by taking apart the somewhat untruthful summary at GameFAQs. I don’t know who wrote this originally, but it is full of seething falsehoods.

Uh, no, it doesn’t. The original Xbox 360 release of Virtua Fighter 5 is still arguably the most complete version of the game. Not only does that version have the incredible Quest Mode (which is missing from Final Showdown), it also has an abundance of online and offline features and 1,000 gamerscore. Final Showdown has less gamerscore, is missing the Quest Mode and has very limited offline features.

The new release also adds an extensive list of features never before seen on consoles.

I call shenanigans on this. An extensive list? I don’t think it does. What it all boils down to is what the definition of extensive is. Google says that extensive means “large in amount or scale.” Well, looks like the word extensive is incorrect in this instance. How about a suitable replacement: minimal?

Yes, it does. It makes the game slower, and characters now jump as though they are on the moon. You can barely throw any moves, as though the game takes place entirely underwater. Can anyone tell me why some of the characters now seem to be bigger or smaller than they used to be? Something has to be wrong because not all of the attacks match up. Are they using the old animations?

Oh, they’re using new animations? And they don’t work? Seems rushed to me. For all the new animations, there is no new dialogue to go with them. Actually, if we want to be picky, the dialogue in this version is the same grainy offering as before. Not a single attempt has been made to remaster the speech. They could have at least recorded new dialogue or put some effort into making this game.

Here comes a screenshot. All of the screenshots in this article are from the older version of Virtua Fighter 5. Spot the differences! (It’s a trick because there aren’t any differences!) 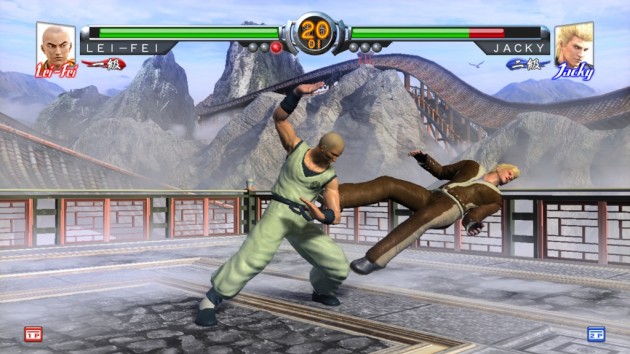 …along with new game modes…

So what is actually new? There are some new training modes, and there is a new challenge mode. More on those later. Yes, there are new modes, but the Quest Mode, which just so happened to be my favorite mode, is missing from this version. That is where most of my hours went when I was playing Virtua Fighter 5. I was happy to give up those hours again, but it looks like my favorite mode did a runner. Out of respect I should be doing a runner, too.

How hard could it have been to just copy/paste that mode?

Well done: You’ve caught up to this generation of fighting games. Oh, wait, they’re not really dynamic, are they. Dang.

Dynamic is another word we throw around a lot these days. Google tells me that anything that is classed as dynamic is “characterized by constant change, activity, or progress.” Well, these arenas are not that dynamic, then. Small elements of them change between rounds, but it really seems no different. I have a replacement word Sega may use to describe the arenas in Final Showdown: stationary. 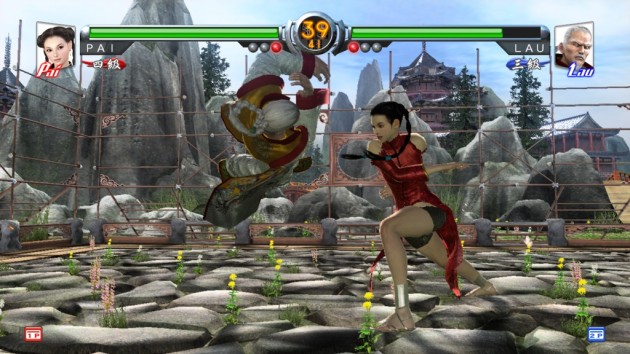 Oh, this is a good one. How do we get these items? We have to pay for them and download them. If you have to pay for something and download it, then it shouldn’t be advertised in the main game blurb. This reminds me of Choplifter HD‘s trailer outright referring to DLC as DLC. The trailer that revealed the game pointed out DLC that could have easily been included in the game anyway, which destroyed the point.

Want to know something really funky? If you don’t download ALL of the DLC packs, you cannot play the Special Sparring Mode. Also, you will not be able to see the customizations that other players have made to their characters. Personally? I couldn’t give a crap about it. Like with Tekken, the customization is poor.

Whatever happened to making characters? At the very least, Soul Calibur knows where it’s at. Hell, even Fighter’s Destiny had that down!

…and new characters added to the roster.

New character(s). Notice the plural. We have ONE new character in Final Showdown. His name is Jean Kuho and he is skilled in karate, but he isn’t even any good. Besides, you won’t play as him because the siblings Jacky and Sarah Bryant are still overpowered and easy to use. New characters *could* refer to the ability to play as Dural, but I honestly cannot remember if she was previously unlockable. 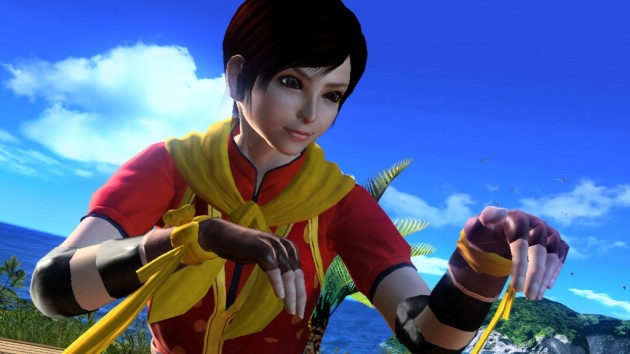 So Final Showdown doesn’t have the Quest Mode and it blatantly lies to you about being the definitive version. Instead of levelling up through Quest Mode, you gain experience by fighting online. You should know by now that while I like fighting games, I don’t actually profess to being any good at them. At the very least you can level up even by losing, which is something no doubt borrowed last minute from Soul Calibur V.

Also, the two Trophies for playing online don’t require that you win any matches.

There is barely anything “new” new, you know? Yes, the arenas have been improved and the mechanics are…different. I can’t say better; really, I can’t. Only the character portraits for Dural and Jean Kuho are new; the rest are recycled. All of the other content is re-used. Even the selection indicator on the character selection screen looks more like a placeholder than something from a professional game.

It is as though Sega is rifling through its franchises and seeing which deserve to have new AAA titles developed. They are farting out House of the Dead, Virtua Fighter and Jet Set Radio downloadables to see which still have a large enough backing to justify a new title being made. I do not think Virtua Fighter deserves a new, full, retail release. Not yet, anyway. Give it some time. 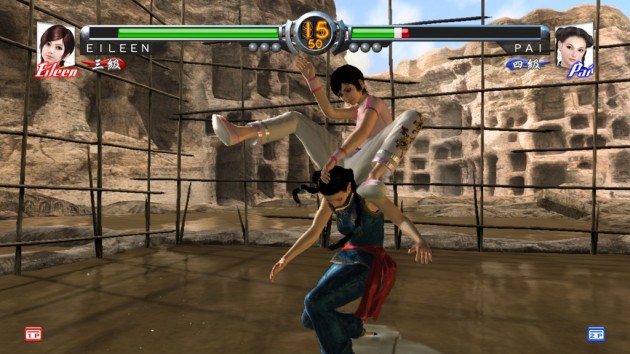 But for all intents and purposes, this isn’t a poor attempt at repackaging Virtua Fighter 5, even if it does take my favorite mode and do away with it. It does not look bad for a downloadable game, either. I just don’t think Final Showdown deserves this “greatest” or “definitive” version spiel. Katamari Forever falls into the same boat. The “ultimate” rolling experience is devoid of the online multiplayer I had enjoyed in Beautiful Katamari. Even the menus in Virtua Fighter 5 seem bare. There isn’t much to them, as though there isn’t much to the game itself.

And these new modes, they’re not so big. The new tutorial mode does a decent enough job of teaching you the game mechanics; it even manages to explain them well enough that I can understand them. The only other game to come this close to explaining things effectively was Dead or Alive Dimensions. But the new Challenge Mode is not so good. It is challenging, yes, but that is because if you fail one of the five battles in the set, you are forced to go back to the beginning. It is as infuriating as it sounds. 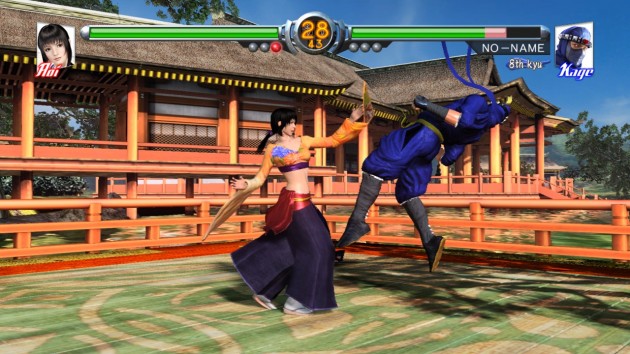 Final Showdown isn’t the worst installment of Virtua Fighter. That award still goes to the Mega Drive rendition that few have even played. I suppose for its price it seems loyal enough to the cause, and it’s another decent fighting game for those sick of the recent offerings in the genre. At the absolute very least it seems Final Showdown doesn’t insult me too much. The re-use of old assets can be attributed to laziness on AM2’s part and Sega’s determination to get this piece-of-shit re-release out of the door as quickly as they possibly could. Really? Sega could do better than this. Of course they could.

I suppose it is safest to say that Virtua Fighter 5 Final Showdown is another version of Virtua Fighter 5, and at least this time the PS3 version has online multiplayer. It is even a little bit welcoming and holds the hands of new players. Interestingly, online battles (even against opponents seven or eight ranks above me) were constantly even and close, no doubt a sign of well-balanced gameplay.

All complaining aside, it is still Virtua Fighter 5. It is still a good game. The online is better. But the quest mode is missing. And that is the only mode that I ever loved. LEAVE NOW before I CHANGE MY DAMN MIND and give this a LOWER SCORE NEARER WHAT IT ACTUALLY BLOODY DESERVES.

Unfortunately, there isn't much to talk about currently besides the latest Call of Duty getting a bunch of zeros across the board. One interesting piece of news (and I really, really had to dig for th