The door opens slowly. A young man stands at the doorway, hat in hand.

At this the young man rushes into Kratos, throwing his arms around his waist and hugging him tightly. “It’s me, papa. Your son!”

“My…son? No, my wife and son were murdered. Actually, I murdered them myself. I’m fairly certain you’re not my son. What did you say your name was?” 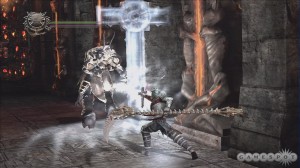 I’ve played my fair share of rip-off games in my time. I’m down with that. I’m here to say that Dante’s Inferno carries on that proud tradition, to the point where holy fuck I can’t believe the lawyers at Sony weren’t kicking down their doors with copyright infringements held out in front of them like an FBI badge from a ’50s crime drama. Same control scheme exactly—light attack, heavy attack, grab, jump, roll on the stick. Hold down buttons to open doors, chests, etc. Same QTEs for larger characters, same power-up devices. Same everything.

Part of the reason why it comes pretty close to—but doesn’t surpass—God of War III isn’t quite so easily nailed down. God of War III has a fantastic Greek mythology meets bloodthirsty ultra violence vibe that works tremendously well in its favor. Dante’s Inferno works good within the context of the centuries-old poem on which it’s based, but let’s face it: liberties had to be taken, and it barely resembles the work it’s based on. I’m no apologist, but I’m also no faker. If someone argues that Dante’s Inferno as a game sucks because they’ve read The Divine Comedy and it’s a smear on its hallowed name, they’re fucking liars. You may have read The Divine Comedy in high school because you had to, but no way did you enjoy it and then go back to re-read it, you pretentious bullshitters. That fucking poem is a chore to get through; I’d rather rake my yard with a pair of chopsticks clenched in my extremely flexible testicles than go through that massive tome again. (Hmmm, great name for a band there—The Flexible Testicles.)

The one place Dante’s Inferno wins hands-down is in main character design. I don’t care what you say about Kratos being this uber cool, ultra bad-ass character—he looks fucking stupid. While everyone else is running around in cool armor plates and wicked design, he’s got a little skirt on. He looks and speaks like a Neanderthal and he’s absolutely single-minded. Kratos kill all! Kratos revenge! Sniff, Kratos kill all family on accident…well, Kratos not take responsibility, Kratos just kill more and more! Grrrr…. Dante, on the other hand, wears a sweet suit of armor and a cross that’s stitched directly into his flesh, plus he uses Death’s scythe. I don’t care who the fuck you are, you go to a party and tell the story of how you defeated Death and now use his scythe to slash your way through the nine circles of hell, you’re getting laid that night, period.

Look, we get the urge to play these types of hack-and-slash games once in a while for two very specific reason: violence and sexuality. Or, more specifically, blood and tits. Sometimes we get tired of arguing with people who don’t play games about the artistic merits of BioShock, or how World of Warcraft is a unique social experience. We just want to smash shit real good and see naked chicks kiss. It’s primal and instinctual and goddamn, these games can be so much fucking fun! Dante’s Inferno is fun and has fantastic imagery. The design work is beautiful, a near work of art on its own actually. But God of War is fucking epic, it’s huge, it’s massive. It’s awe-inspiring. On my way-too-big 73” TV it goes beyond beautiful to something indescribable. Just the opening set piece, with Gaia and the other elementals scaling Mount Olympus to take on Zeus and the other Gods, and then your battle with Poseidon and finally a throwdown with Zeus, is so fucking cool. I just finished it after three days of marathon play and despite a few bullshit puzzles, it was a blast to play. My favorite of the three main games so far.

Dante’s Inferno is great too; there’s no doubt about that. I really had a good time playing through it. You get to level your player up on the good or bad side, and you get to choose if you want to save or damn historical figures throughout your trek out of hell. A few jumping puzzles aside, I’m planning on another complete playthrough, so that should tell you something. I built up my good side and you get to keep your upgrades on the replay, so now I’m going to go through and be a complete evil asshole. It’s obviously got a big budget and they just went batshit (in a good way) with the creative design. But at the end of the day, it’s just a shallower version of that from which it’s stolen, God of War III. That Conan game from a few years back was exactly the same thing, just not quite as polished. 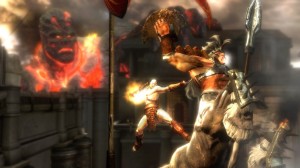 Now God of War III…that shit is fucking radical, man. After you beat it you unlock a massive making-of video, and they don’t pull any punches. That asshole Cory Barlog (game director from God of War II and a fucking prick who likes to yell at his employees) quit two weeks before God of War III was to start production, leaving everyone holding the bag and no director to take over the series. They actually interview and show all the employees being pissed off about it, and I love it. It really gives you an insight into the creative process of a huge-scale production like this.

But I digress—the game itself is just better than its clones, and for a reason. The chain-blade weapons are just more satisfying, the grab and smash just feels more responsive, the jump in the air and fling chain-blades down just crunches better. The only real bitch I have is the FUCKING FLYING HARPY SEQUENCES, where you have to whip them and fly them to the next one. It’s goddamn horrible and difficult and I hate it. Enough said. There’s a ton more to God of War III I haven’t even touched on yet, like the new weapons which are actually useful this time, ripping off Helios’s head and using it a lantern to discover secrets, the new flying sequences where you just shoot straight up in the air around a massive chain, and oh so much more. You really should play both games.

But in the end, Kratos has more blood, bigger battles, jigglier tits and just more umph than Dante. Both games have huge budgets and they splash them all over the place. But Dante has no chance. God of War III is still probably the best-looking game out there, and nothing can match the epic scope of this battle with the gods. Dante’s got a big dick for sure, but Kratos…well, sorry Dante, but his is bigger.

So I have to rate both games now, and the score-o-meter won’t let me do two at once. While Dante is good, it’s only just good, so it rates a 7. But God of War III goes beyond good; it does just that little bit extra to graduate to great. Not perfect but holy shit, it’s getting there. Kratos gets a 9. So I guess I’ll use the score-o-meter and bundle these two action blood orgies together for a collective score of 8, which means that no matter how you slice and dice and fuck and scream your way out of hell or up the cliffs of Olympus, you’re in for a great time.

I don't know if you've noticed this, but there's discrimination in gaming. No, I'm not talking about women being represented only by either prissy princesses in need of rescue by a brave and strong ma ...