In a recent conversation with ‘Cola Editor-in-Chief Paul Franzen on a popular social networking site, Paul told me about a game he thought I might like. It went something like this:

Paul: Hey, I know you like FMV games, so I thought you’d be interested in this game Darkstar for the PC.

Me: Never heard of it. Hold on… ::does some quick Google research:: Oh man, you’re right! I love FMV games, and it stars the cast of Mystery Science Theater 3000. I’m a huge MST3K fan! I’ll have to check eBay to see if I can find an old copy of the game for sale; hope it isn’t too rare and expensive.

Note: This conversation is largely a figment of my imagination. Paul doesn’t really exist.

Yes, it turns out that Paul was deadly serious—Darkstar: The Interactive Movie was released November 5th, 2010. It is a point-and-click-style adventure game for the PC that requires Quicktime VR technology, which was used for a handful of games in the mid-to-late 90s but has since become known as the technology that allows you to look around somebody’s kitchen before you buy their home, like this one (requires Quicktime, naturally).

Because it is a PC game, my first challenge was to get the goddamn thing running. So, I installed it along with Quicktime (ugh) and was immediately greeted with “iShell has stopped working.” Great. So I consult the company’s website, and their advice is to reinstall Quicktime. I do that and get the same error. Their advice from there is to “try another computer,” because everybody in the world is Richie McTenComputers. After trying a few more things to no avail I give up on installing this on my media center, dismiss it as yet another problem with Vista and another reason I need to upgrade the stupid thing, and install it on my Win7 laptop.

Same error message again. “Nooo, damn it!! I want to play Darkstar! I WANT TO PRETEND I AM A CREWMEMBER ON THE SATELLITE OF LOVE AND DIE HAPPY!” Thankfully, I was able to get things up and running after screwing around a little more, right after Quicktime asked me six times if I would like to update it and, while I’m at it, install iTunes. No thanks, Quicktime.

The first thing I noticed upon booting up the game is that Darkstar is terrified of the edges of your monitor and does everything it can to keep from touching them. Observe: 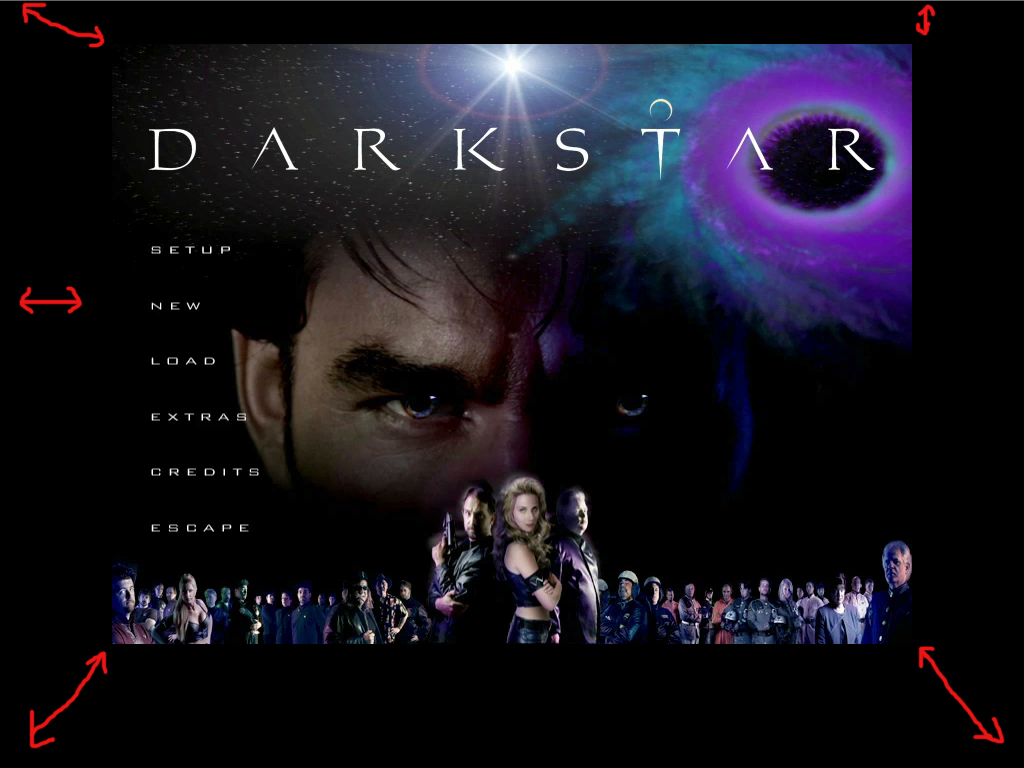 C’mon, little guy, don’t be scared. Feel free to sprawl out; the monitor is all yours.

15 years ago there was an excuse for this: graphical limitations. It’s 2010 (or it was at the time of release), and even the worst computers can handle displaying this game fullscreen—there’s no rendered-on-the-fly 3D effects and the videos don’t even appear to be HD.

Now we start the game and—oh wait, Quicktime wants to know if I want to update and install iTunes and Safari. Go away, Quicktime.

So, the game starts up and I’m looking for these stunning movie-quality graphics the game boasts. None to be found. In fact, the game seems completely ignorant of the fact that everything about it has been out of date since 1996, yet it struts around with complete confidence in itself. Wait a second…humorously outdated and brimming with undeserved confidence? This is the Guy Fieri of videogames!

There’s some graphical weirdness throughout the game, even outside of the overall obsolescence. For example, every time you see the main character (Clive Anderson), it looks like he was ripped out of a muddy VHS recording and pasted over the 3D rendered backgrounds (you can even see it a bit in the top banner for this article). The 3D models also tend to be very blocky and oddly colored. For example, the first room you start in has bright red banisters lit by purple overhead lights. I wasn’t sure if I was in a spaceship or if I was playing a glow bowling sim.

Now, as much as I enjoy cheap jabs, I want to be fair here. The 3D modeling, graphic art, and pretty much the whole damn game were created from the ground up by one guy, so comparing it to huge blockbuster games may not be reasonable. If you consider that the game is, at the end of the day, just a very ambitious indie game, then you become a lot more willing to look past its graphical flaws and judge it more based on its gameplay.

It’s also got some interface problems, presumably due to the limitations of the Quicktime VR interface. Clicking things doesn’t always do what you’d think it would, and your cursor only really has two states: a circle, which denotes that there is nothing to click on, and an arrow, which means something will happen if you click. What will happen? Who knows! You might take a closer look at something, use an object, or do something that results in your untimely death. Interface problems can be overlooked in some game genres, but in adventures like this, the interface IS the game, and it’s a hard flaw to overlook. When you aren’t struggling with the interface though, the gameplay isn’t bad.

It starts up, and after listening to Peter Graves spout off what sounds like a particularly heavy bit of William Shatner-style beat poetry, you find yourself waking from a several-hundred-year suspended animation session in a spaceship called the Westwick. Initially, we don’t know anything more than this because—get this—the main character has amnesia, a concept used only slightly less than Xbox Live Arcade games with zombies and Reginald Veljohnson films in which he plays a cop. Click on just about anything, and your screen becomes a whirling dervish of dizzying angles and prog rock until you get to your destination about two feet away. Sometimes you’ll even watch a cutscene of your character walking around the ship, depending on where you go. If you miss it the first time, don’t worry; you’ll see it again next time you go to that area of the ship. In fact, you’ll see it any time you go to that area of the ship for any reason, and a few other parts of the ship, too. Oh, and did I mention it’s unskippable? It is.

Since this is an “interactive movie,” the focus is much less on puzzles and more on advancing the plotline. You’ll run into a few anagrams and jigsaw-style puzzles, but don’t expect anything that’s going to tax your brain. Thankfully, as it’s such a central part of the game, the story isn’t bad, either. It’s no Blade Runner or even Mass Effect, but it’s an entertaining piece of sci-fi no less. Watching the story unfold as you start with no knowledge and explore the ship for bits and pieces that reveal new information about what the hell is going on is a rewarding motivator. A problem that occasionally comes up though is that it’s easy to get lost sometimes, with the ship being so large. (This could just be my own poor sense of direction at work.) 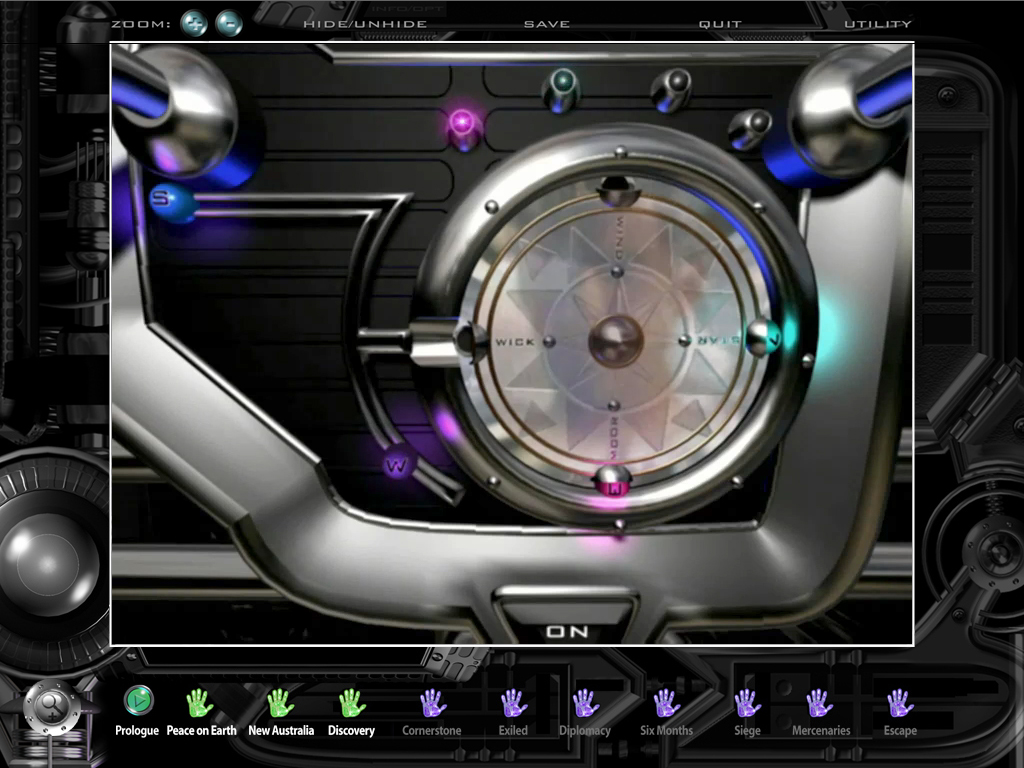 Backstory videos can be unlocked every time you open a handprint-scanning lock in the game called a BioLok: a disappointment, because I would rather play through a story in a videogame than watch it. However, I can overlook it in this game, since it does state right in the title that it’s not purely a videogame anyway.

Since I’m the only person in the world who for the past 10 years has been saying “Man, I wish they still made FMV adventure games,” I feel like I made a wish on a monkey’s paw. I got my wish, but not quite as I had intended or hoped.

At the end of the day, I can’t give the game a cut-and-dry recommendation. If an FMV adventure game with goofy acting, a poor, out-of-date interface, and sub-par graphics doesn’t appeal to you, then you’re simply not going to be into this, and I can’t say I blame you. But you’re a GameCola reader, so graphics probably don’t matter to you, and it’s entirely possible that you happen to like the idea of working to allow a B-movie space opera to unfold before you, despite simple and few puzzles. Or, you could just be a die-hard MST3K or Cinematic Titanic fan (no, Mike Nelson and the guys from Rifftrax aren’t in this one). If either of those are the case, this game is worth a shot.

There, this review is done. Now I can uninstall Quicktime. No, I said “uninstall,” not “associate Quicktime with all movies and music on my computer.” DAMN IT, QUICKTIME!

Does anyone actually go to GameCola on purpose, or do they just get here by bad Google searches?