I bought Conan a few months ago and I have been loving it. But maybe I shouldn’t be.

Me, Conan. You, Disappointed.

Though developed for current-generation consoles, Conan looks like a late PlayStation 2 game, with washed out high-brightness textures and poorly executed bump-mapping. Conan is a carbon copy of God of War, without the genuinely gripping story. Looking for an excuse to have Conan the Barbarian forget his fighting skills so that we may conveniently re-learn them, the writers settled on Conan getting washed up on a beach with his memories re-written.

I wish the writers would get washed up on a beach but keep their memories, so that they may sulk until they starve to death or die of old age alone.

After fighting some pirates, Conan discovers that the Black Plague has spread across Hyboria, and soon learns of a link between the Plague and super-human strength. This leads him on an adventure to destroy an evil magician who has unleashed this disease, and maybe claim some of that power along the way. He is doing the work of angered gods, wreaking his vengeance upon Hyborian soil with the clashing of blade and bone.

But when you get to the final boss of the game, everything changes. The memories of this game that you enjoyed are immediately defiled by an exploitative boss battle that caused me to swear, storm out of the room and cry to myself whilst trying to keep the Stanley Knife away from my frail little arteries.

Want to know what Conan is really like? Read on. 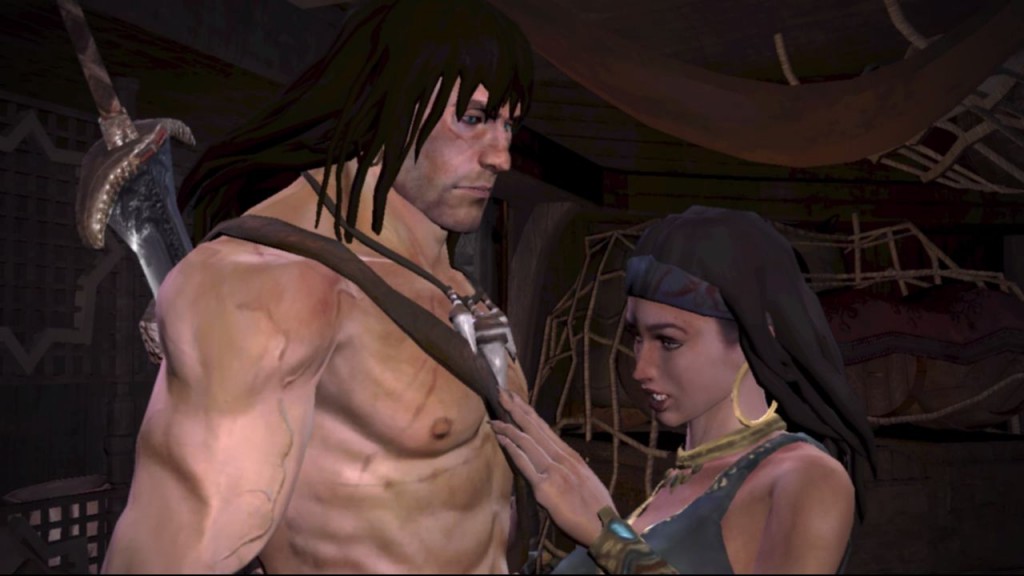 To believe, even for a second, that Conan can love someone is just plain stupid.

Me, Conan. You, Embarrassed.

Conan is like your half-brother from Ireland. You know the one. The brother you never invited to your wedding through fear he would turn up in a suit made entirely of four-leaf clovers, whilst reciting The Pogues’ hit “Fairytale of New York.” Your Irish half-brother is always a fucking pathetic, sappy drunken waste-of-space, no doubt scurvy-ridden and still occasionally wetting the bed at 36 years old. You can’t stand to be within fifteen million miles of his location at all times.

You feel like you have to love Conan, not only because you’re technically related, but also because he never forgets your birthday or Christmas. Although he is a detestable monster unfit for any useful purpose, he does deliver you presents. These are in the form of adequate though just about average combat and bad-for-the-time graphics. At least he remembers to treat you nice; he occasionally shows you photographs of boobies.

But Conan has a problem. He drinks alcohol every hour of every day, and he pays women off of the street to urinate in his ears. His favorite videogames are Lightning Warrior Raidy and Water Closet. He dances naked around the campfire and scares off the wildlife with his swinging member dangling to and fro, humming “Kumbayah” loudly so that all the wenches in the Netherworld can hear him.

He is an absolute public menace; can’t take him anywhere. 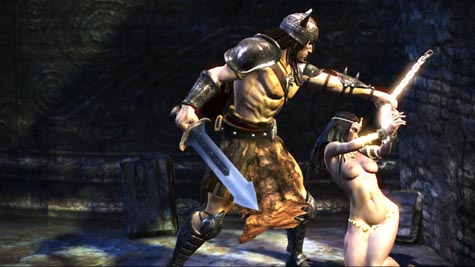 I can go on, but I won’t. Exaggeration aside, what is Conan?

Well, fuck you Conan. FUCK YOU.

…I’m feeling good again now. Let’s get this over with.

It takes a sharp and extremely difficult boss to shatter the illusion of fun, to help you break free from Conan‘s spell and see the true game underneath. What you enjoyed was fighting the same three enemies a hundred times in several identical-looking levels. Go to hell Conan, and let Crom judge you.

We love you, we really do; we just can't really show it right now by finishing the new site. Oh, and the fits of ire and the groans of impudence...