Secret of Mana. The very name—well, it probably doesn’t do much for today’s gamers, the kind of gamers whose ears prick only for the Final Fantasys and the Tony Hawks of their generation.  Maybe with a few Roman numerals thrown at the title’s tail end, or an X-Treme Sports tough guy sponsoring the game, it would be active in the disc tray of every gamer’s XBox, and maybe then it would gain a smidge of recognition.  It is, after all, a Squaresoft role-playing game.  They don’t screw around when it comes to this genre, or so we are made to believe.

The opening montage (well, about as montage as the Super Nintendo’s 16-bits can handle) tells the tale of the sword in the stone.  Also the tale of legendary blade “Herald.”  “Gigas,” as well.  The games introduction informs us that these historical weapons are in fact one and the same, and that this blade’s true title is the “Mana Sword.”  The sword’s main purpose in life is to protect the small hamlet of Potos from monster attacks, which begin to occur once our stereotypical dumb little kid hero removes it from its home in the river.  His reason for taking the sword is to hack down the shrubbery blocking his path home, which he does.

After he returns to Potos, he learns that monsters have been attacking his home town, and after defeating a giant ant creature and meeting famed hero Jema, he is banished from his home by his adoptive father for removing the sword and drawing monsters to the village.  As —– (your main character has no default name), you learn the history of the sword, why it is important that you have it, and what you must do with it.  You also learn of this energy called “Mana,” which is the lifeforce of all living things.  Evidently, its power is weakening, and it is up to you to recharge the eight Mana seeds, which come from the Mana Tree and can be found at the eight Mana palaces, by holding the Mana Sword up to them. 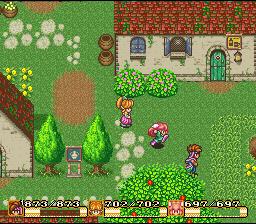 Not too far into the game you have the other two characters join your party, both also unnamed, one you cannot even determine the gender of.  This is where Secret of Mana really provides a unique element to the 16-bit RPG: more than one person can play at a time.  With a multitap (an apparatus that allows up to five controllers to be plugged into your Super Nintendo), you can have all party members be controlled by a human counterpart, which is something unheard-of in this genre.

Typically, multiplay is illogical in such a role-playing game, for you only really ever see one character on the screen at a time, with the others magically appearing at critical points in the game, such as a battle scene, or a specific character having to accomplish some sort of task.  Not here.  Once you have the characters, your whole party is always on the screen at the same time, whether you’re being blasted from a cannon to a far-away town, or beating the bloody hell out of a cute rabbit-resembling enemy, or merely conversing with the water spirit about all things Mana.

There simply are no battle screens; rather, Secret of Mana uses a very Legend of Zelda: A Link to the Past-ish style of combat, in that it’s all done in real time.  Run up to a baddie, smack it with a sword.  Wait for your attack meter to reach ten (a needlessly annoying process whose only saving grace is that enemies are unable to move for an equal amount of time after you smack them).  Maybe zap them with a few spells, which only the girl and genderless can use; just keep attacking it ’till you’ve killed it dead.  No time-consuming battle animations.  The huge, huge problem with this otherwise fun form of a multiplayer experience is seen when you do not have other people playing with you.

The AI (Artificial Intelligence) of your party members in Secret of Mana is quite possibly the most stupid experienced in the Super Nintendo’s six-year existence.  The game gives you the option to determine how the character-not-you react to enemies, i.e., you can set them to run away from enemies, or to run right into battle.  The setting matters not, however.  No matter what you are trying to accomplish, your team members go against it.  You try and bolt through a crowded room; they stop and fight.  You try to dismember all enemies in your path; they sit idly by and watch.  They get caught in corners endlessly; an all-too-large chunk of the game is spent retracing your steps so that your pals can move again, which they can only do in a straight direction towards your character.  Except when you want them to.  It gets to the point where you pray for their death, and try to cause such, so you no longer have to deal with their idiocy.

Aside from your mentally deficient cohorts, the game’s not really half bad.  It has the home-style 16-bit graphics that we’ve all grown to love, and music that you’ll want to download off Kazaa, but can’t because it’s totally impossible to find.  The story is admittedly lame—I know that they are not all the same blade, and that Mana doesn’t just grow on tress.  But the gameplay—and the option to have multiple players—makes up for it. Secret of Mana‘s Zelda-esque setup makes killing enemies fun instead of tedious, and it’s usually not so difficult to move on to the next part of the game, provided that you level up.

I snagged this game for a steal at the Philly Classic 3—$20 it set me back, when the typical price is closer to $45, and that’s if you can even find it.  This game is not so easy to come across.   But if you can find it, and it’s for around the price I paid, by all means pick it up, but I wouldn’t go for the $45 unless you’re rich and use $20 bills to upholster antique chairs.  The inexcusably stupid AI may turn off a lot of gamers, but if you can get past that, you’ll find Secret of Mana to be an enjoyable experience.

Which Zelda game should get a 3DS remake?