Previously on Matt Jonas’ Totally Amazing Review Show: The imposter was shocked to find our hero Matt Jonas very much alive! Now, in a completely unexplained fashion, we’re back to normality.

Halfbrick Studios made love to their sponsors and produced a litter of kittens. Purrcisely the kind of thing I expected them to do. Sell out, I mean.

Your game goes huge (seventy million players to be precise), and you’ve even had it released on a game console in full high-definition glory. You’ve been the poster-boy for the iPhone. There’s a hundred imitators out there and very few of them could even hope to better you. What do you do next?

Sell out. It worked for Rovio.

This installment of the Fruit Ninja franchise (well, I guess it technically is a franchise now) serves as a form of publicity for the Dreamworks movie Puss in Boots. There’s been a fair following for the fanciful feline Puss since he made his debut in Shrek 2. Adorable, yes. Deadly, of course. A ninja?

Well, no. But I’m getting to that. 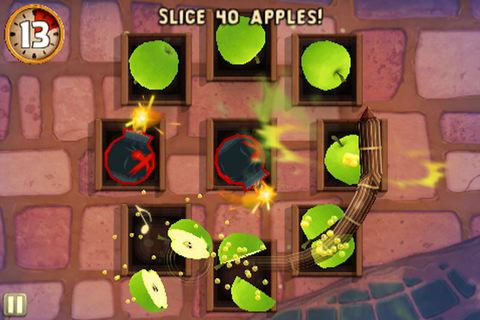 There are additions in this version of Fruit Ninja that have been long awaited. A mission mode, named Bandito, allows players to run through a series of randomly selected and generated challenges. This would have been even better if it were included in a Fruit Ninja title that didn’t carry someone else’s license.

The tomato is also added to the large array of fruit that you get to chop. Yes, tomatoes are fruit. No, they really are. Stop arguing with me.

With the game comes a brand new swag collection and a bundle of achievements to unlock. Full Game Center and OpenFeint implementation is also featured, as it was in the previous version of Fruit Ninja. This game is also ad-free.

Well, ad-free if you don’t consider Fruit Ninja: PUSS IN FUCKING BOOTS to be an advertisement of any kind. 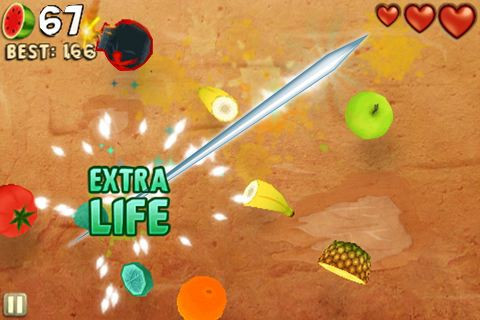 Even the classic mode has been updated. Now labelled Desperado mode, it features a few shake-ups to the original formula. The first is that extra lives are not rewarded with every 100 points you earn. Instead, they are earned by slicing the Magic Beans that occasionally appear onscreen.

The second major difference is that…uh…well…well there’s these beans that give you extra lives…and…did we mention PUSS IN BOOTS is in this game!?

The time elapsed between Fruit Ninja and Fruit Pussy has resulted in an updated version of the previous game. On the other hand, the game is much smaller. Fruit Ninja has three game modes, while Puss in Boots only features two. There are twelve blades and four backgrounds to unlock in Fruit Ninja, but only four blades and three backgrounds to collect in Puss Ninja.

And the blades suck. 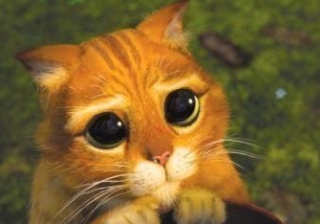 I am ashamed of myself, señorita.

There’s also thirty achievements in Fruit Ninja, yet only twenty in Boots Ninja. No matter how you slice it, Puss in Boots comes up short. The license seems slapped onto the game with little care or attention. Wait, isn’t that what I said about ninjas in Shadow Warrior?

Also, after checking my achievements in Game Center, Fruit Ninja Puss crashes completely, or dips to black and never returns. The leaderboard is also broken (whatever I score, I’m always 25th in the world this week).

Things are not looking good for me, no?

Although missing the voice of Antonio Banderas, this is still a proper boss effort. The question is really whether you *need* these new additions, or whether you are happy sticking with the traditional Fruit Ninja. I say go for it, because it costs a dollar.

Now for the score, which means absolutely nothing.

Whenever my wife and I are trying to think of where to spend our next vacation together, our knee-jerk instinct is to say "OMG, LET'S GO TO DISNEY!" It's where we had our first date and spent our hone