During a recent recording of The GameCola Podcast, Jeddy, Nikola and I talked a little about what we thought the big contenders for GC Game of the Year 2011 might be. I think we ultimately decided that it would be a fierce battle between Back to the Future: The Game and, uh, Ghost Trick—because GameCola has really weird tastes in games. I’m not convinced that any of us have actually played a Call of Duty game before.

Anyway! I thought I might expand upon that topic and take a quick look at some of my top picks from 2011 so far. I bet you can guess what the first two are!

2. Ghost Trick: Phantom Detective: It’s by the guy who made Phoenix Wright, complete with a fake-out Phoenix Wright sighting. And the ending is crazy—it turns out that your main character was actually [redacted] all along! I never saw THAT coming!

3. Bastion: Thanks to this game, I can’t stop narrating myself when I play other games now, too. “The kid races through the item cube, thought he might get himself a red shell this time. …Damn. Bananas. It’s always bananas. But I guess that’s to be expected after The Calamity took all the sunshine away…”

[Update: I’m now about halfway through the game, and it turns out that I don’t actually like it. Ooops.]

4. L.A. Noire: This game loses some points with me because I’m still miffed that people referred to it as “Phoenix Wright for adults.” Really? Just because it has naked dead people, that doesn’t make it any more “mature” than a videogame with an actual story, guys. 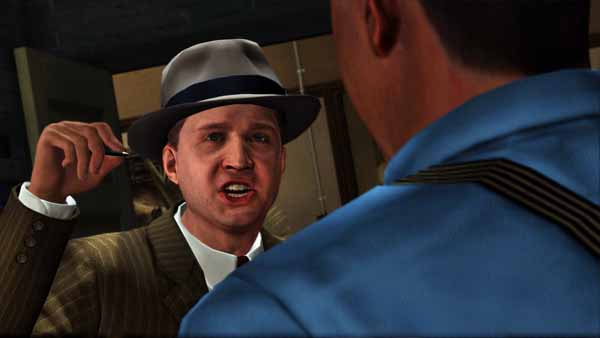 “Hey you, get your damn hands off her!” Sorry, still thinking about BttF.

5. LittleBigPlanet 2: Remember when that game came out earlier this year? And then it played an integral role in my wedding reception? I think if I don’t vote for it, that means I don’t really love my wife.

6. You Don’t Know Jack: This one ranks high for me because it means I can finally put to rest the PlayStation 1 version I’ve been playing off-and-on for 10 years.

7. Portal 2: I didn’t think I would like Portal 2, because I usually get frustrated when a game’s puzzles take more than five minutes to solve and end up running to my wife to solve them for me. Actually, that happened here, too. I’m not really sure why I like it. Must be the bouncy-bouncy goo.

I also have high hopes for Lost in Shadow and Hector: Episodes 2 and 3, but…I haven’t actually played them yet, so I probably shouldn’t label them Games of the Year just yet. Plus, there’s still lots of stuff to look forward to this year, like Trine 2, The Book of Unwritten Tales, Mario Kart 7, and Now That’s What I Call Games. I’m not sure which title’s going to go home with GameCola’s GotY for 2011, but if I had to guess, right now I’d put my money on Back to the Future, because I’ve made it clear to my staff that I will fire anyone who doesn’t vote for it.