You’re not a fan of Crash Bandicoot. You’ve always thought these games were behind-the-times and constantly bettered by others in the genre. It is an utter apocalyptic shame that you have to miss out on this game because of your own predjudices, you God-fearing vegetarian homophobic doorstop. Crash Twinsanity is the best installment of the Crash Bandicoot franchise. But what do you care? Keep rolling your ten-sided dice and commanding your legion of Chaos Blood Marines on their journey to the Rocks of Falterdaan (or whatever you hip bitches do in Dungeons & Double-entendres).

So where does Twinsanity come in? The team behind this game was formed exclusively for the re-invention of Crash Bandicoot. This is good, as they’ve done exactly what they were asked to do. If they had been the department for agricultural-based social media games, Twinsanity would not have turned out so great.

This is the first game in the series to focus on free-roaming environments, creatively dragging Crash Bandicoot back up to speed. Also worth noting, this game contains crossdressing. Does that tickle your fancy? 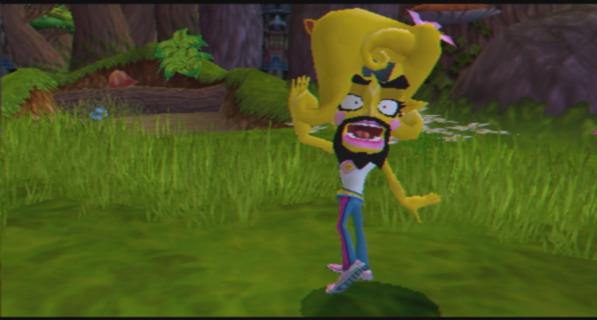 Why Should You Play It?

Twinsanity is a funny game, with truly laugh-out-loud moments that we rarely see elsewhere. Sometimes crude and predictable, but an honest hark back to the children’s cartoons from the golden era of Cartoon Network. There are so many great moments. The script is the same tongue-in-cheek style shared by No More Heroes, but with less smut and obscure references to Japanese culture.

There are many things that do confuse me about this game, though. On two separate occasions, Crash becomes mesmerized by Neo Cortex’s wobbling buttocks and cannot resist the urge to kick them. I found this to be rather hilarious, but I do feel slightly disturbed that someone on the team actually wrote that.

I think we can figure out who, though. One half of the Ren & Stimpy writing team, Jordan Reichek, penned this game’s chuckle-worthy script, emphasizing the humor more than it had ever been in this franchise up to this point. 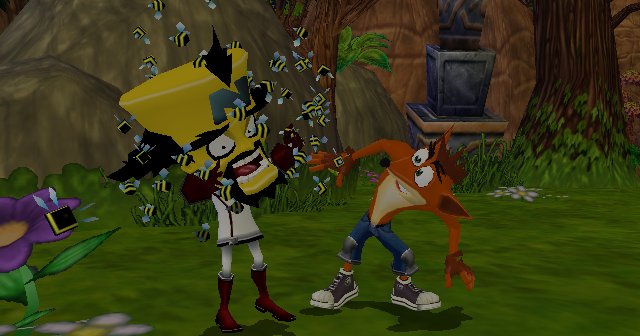 This might be Crash Bandicoot, but you’re not going to be dying every five seconds.

Really. They’ve actually realised that dying over and over isn’t fun.

That doesn’t mean you don’t have to worry about death in this game, as you still have to deal with the terrible checkpoint placement. This arbitrary gaming staple should have long since been demolished. It remains in Twinsanity, at annoying locations that cause you to rage from deep within your own soul.

I didn’t know it was possible to rage this much, until I played Twinsanity. True story.

There are a few extremely hard bits, but I breezed through the game with little trouble. Around three-quarters through it, I started getting frequent Game Overs. You get a lot fewer lives in this game than in other Crash Bandicoot titles; you’re not going to see the extra life count go past 20.

The checkpointing is also trouble during the last stage, Ant Agony, where there are two saving locations: one at the start of the stage, and one before the final boss. If you lose all your lives at the end of the level, before the boss, you have to retread the whole stage.

That’s not cool. NOT cool. 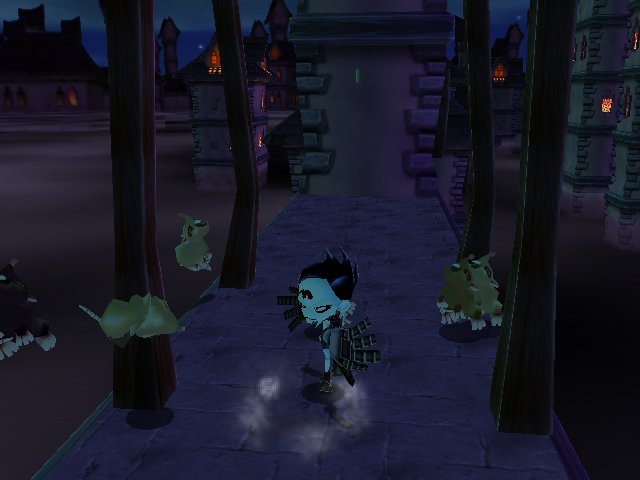 Nina Cortex only gets one level in the whole game, unfortunately.

This game saw a cut development cycle, and the released product is in fact unfinished.

You might remember that this is what happened with Sonic Adventure, Sonic Adventure 2, Sonic Heroes, Shadow the Hedgehog and Sonic the Hedgehog 2006. If a development team says they can make the game within a certain time, they are contracted to that period. If they hit snags and the game has to be released unfinished, they throw some patches over the gaps.

You might say this is commonplace, and yes, it’s commonplace now, with systems and games that can update themselves after release. With a game like Twinsanity, there might have been updates for the Xbox version, but only if the game was Xbox Live enabled, which it wasn’t.

You do understand how that works, right?

Elements of this game were stripped out because they were too glitchy to fix before the deadline. The major disappointment is the absence of the planned Gone a Bit Coco level, where Neo Cortex would battle his way through the warped mind of a comatose Coco Bandicoot. This level would have been nothing short of spectacular, as the artwork for the stage implied Cortex having to escape from a rampaging teddy bear.

Other problems are far more prominent. Collision bugs (dis)grace some of the game areas, and a number of the jumps are precarious and will eat up your precious lives very quickly, despite what I said earlier. Nom nom nom GAME OVER.

Being released incomplete is probably the reason for the majority of bad checkpoint locations. One notable example is the checkpoint in Rooftop Rampage, after you’ve been chased by Neo Cortex’s blimp. Dying on the boss two minutes from here sends you back to Continue Crate. A Game Over or re-loading your save takes you five minutes back to the last World Crate, which means re-living the blimp chase again. 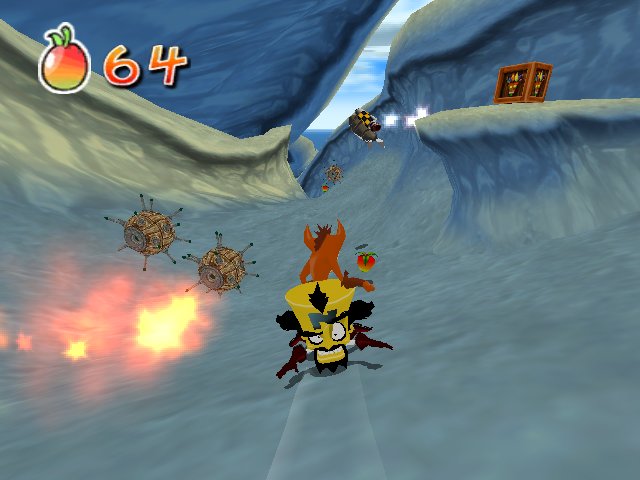 One of the best sections: the Humiliskate down the icy hill.

There are bugs associated with certain region versions of the game on particular consoles. The PS2 PAL version has a funny glitch where Evil Crash will chase his own tail during a section near the end of the game. The Xbox version, when played on the Xbox 360, suffers a very large amount of slow-down generated by the smoke and mist that the game uses in some of the later levels, and experiences exaggerated loading times during levels.

There are general omissions, too. The first few areas of the game are populated with pretty and artistic set pieces that really bring out the cartoon nature of the game locations. After about halfway through the game, though, the locations are more uninspired and empty, as though the development team was running out of time to put in the final touches.

There’s only one playable section and boss for Nina Cortex, which is rather upsetting. Her character and abilities work great in the one level where she’s playable in; why couldn’t there have been more? She seemed to be introduced only as a story convenience, before being cast aside and kidnapped near the end.

Wait, why do I always fail to mention the soundtrack? Memorable, catchy and performed entirely in acapella.

Bugs aside, Travellers Tales has developed an incredible, hilarious, frolicsome adventure that will make you laugh with vigor. If you are still waiting for the return of Crash Bandicoot, you obviously let this 2004 title slip under your radar. This is the last great game in the main franchise, before Radical Entertainment and Sierra slaughtered the memory of Crash with that filth Crash of the Titans.

The later released Mind Over Mutant is a pretty fucking solid game by all accounts, but Crash Bandicoot had effectively run out of lives by then.

In my 14 years of playing video games, I have been told many things. "You should do something constructive", or "quit wasting your time". There is one thing that those people don't realize. I have lea