Let’s do this, videogames.

(And you didn’t think my intros could get any shorter! Sorry; must be because I spend all my time blogging about yardsales now. Videogames just aren’t cool anymore.) 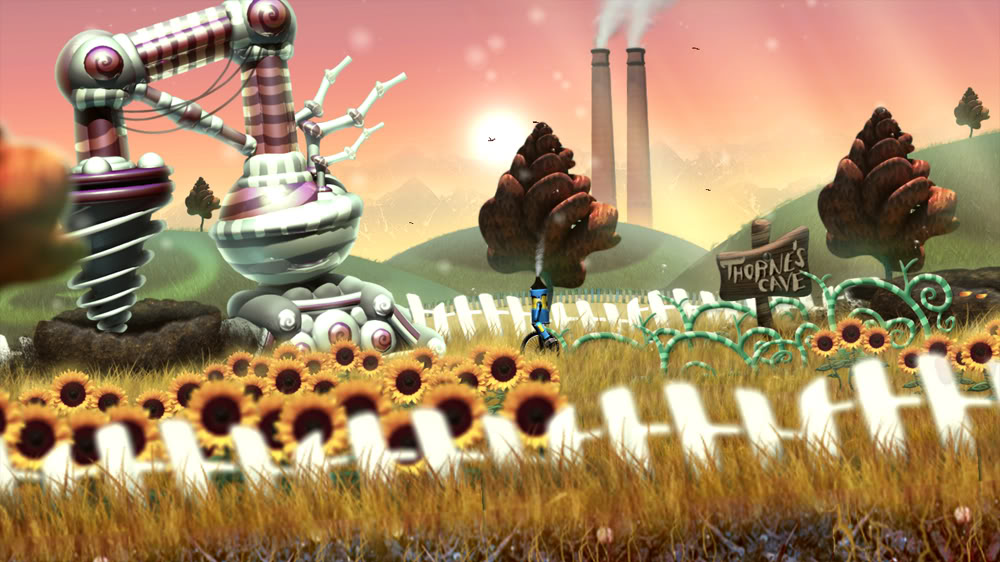 You’ve seen people use the phrase “the screenshots don’t do this game justice,” right? It’s one of those awesome games-writer clichés that we like to use when we don’t have anything interesting to say. (Or, if you’re a writer for something like Game Informer, it’s just what you use, period. BOOM! Got you, Game Informer! …They’re not still around, right?) TIC is the game people wish they were playing when they said things like that, because now it just makes them look bad that they already used it on something like anything else.

All right? Have we all watched it? Maybe you’ve still got some breath in your lungs, but—to use my own Pudding cliché—this thing could easily pass for an actual videogame.*

So, what are you? You’re this dinky little flying unicycle thing, who’s trying to thwart the megalomaniacs from EvilCorp from drilling up your homeland for sweet, sweet oil. (Videogames ARE promoting a liberal agenda! I knew it!) In the demo, the bulk of gameplay was centered around collecting silver acorns. Characters kept asking me for them, I guess because the plan is to just keep throwing them at Sarah Palin until she goes away. I’m down.

TIC appears to be a smart, beautiful, playful puzzle-platformer, but it really showcases the limits of the XBLIG platform re: demos. This game costs $3, or roughly WAY MORE than your typical Xbox indie game, and at a 10-minute time limit, the trial wasn’t enough to convince me that I’d want this game more than, say, a hoagie from Wawa. I’ll probably end up getting it anyway—just not when I’m hungry. 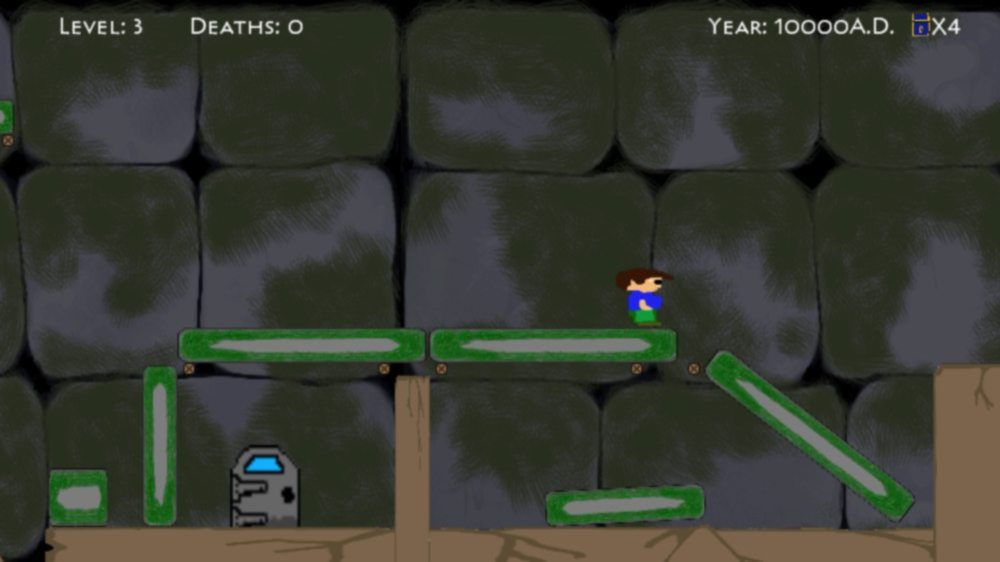 This is a game about time travel, which, as you know, is a topic GameCola never talks about ever. It’s a platformer about a squishy-looking guy who’s been sentenced to “Eternal Prison.” Luckily one of the guards sympathizes with him—he’s left our guy a special treat in his cell. A device that allows him to travel through time!

And thus, gameplay. The item allows you to open a slider menu up on your screen, enabling you to select time periods ranging from 3,000 B.C. to 10,000 AD. As you move your cursor along the slider, the world around you changes to reflect the changing time periods. You have to find the one that suits your current needs to advance the game.

For example, the first puzzle involves a door with a solid wall in front of it. You travel to the future, to a time when the wall has long since crumbled, in order to go through the door. Granted, this means the puzzles aren’t generally much more complicated than “scroll around until you figure out what time period allows you to do something, and then go do it,” but there’s a certain Portal-esque aspect to the game, arranging time and space just the way you need it in order to escape the labyrinthine prison.

At least, that’s what I’m telling myself. Using lofty terms to describe this game helps me get through the next two that much more easily. You’ll see why very shortly. 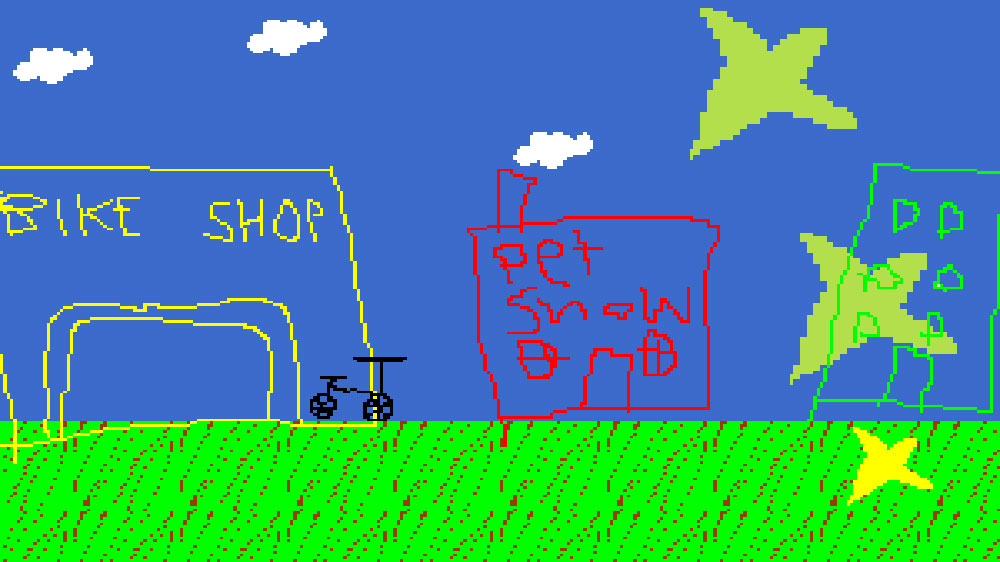 I hate doing things like this, because I always feel like I’m cheating you out of content, but I don’t have the vocabulary or the writing talent to accurately tell you what in God’s name playing this videogame is like. I have to resort to video footage. (Trust me, though—it’s worth it.) Watch carefully, and hold on to your eyeballs.

Recorded with my point-and-shoot** in front of my TV. I’m so sorry.

I want to say something snarky here, like “and now I’ve put as much effort into writing about this game as the developers put into making it,” but I don’t think that’s true. I think it’s an intentional style, rather than the result of laziness or a lack of skills. It’s like those minimalist paintings that art history professors insist have some kind of deep meaning, even though the stupid painting is very clearly just one giant splotch of red. It might seem like they created it in five minutes, but I guess that’s part of the charm—that they so flawlessly executed a game that looks like it was made in five minutes, but actually has some substance to it, unlike games that were actually made in five minutes.

That’s not a very funny analysis, though, so go back and watch the clip again while I think of some good fart jokes, or whatever.

“Hey, what did the fart say to the other fart?” “Pppfffffffffffft, I’m a fart!” (Man, this stuff is hard. I have a new-found respect for the writers of World Wrestling Entertainment.) 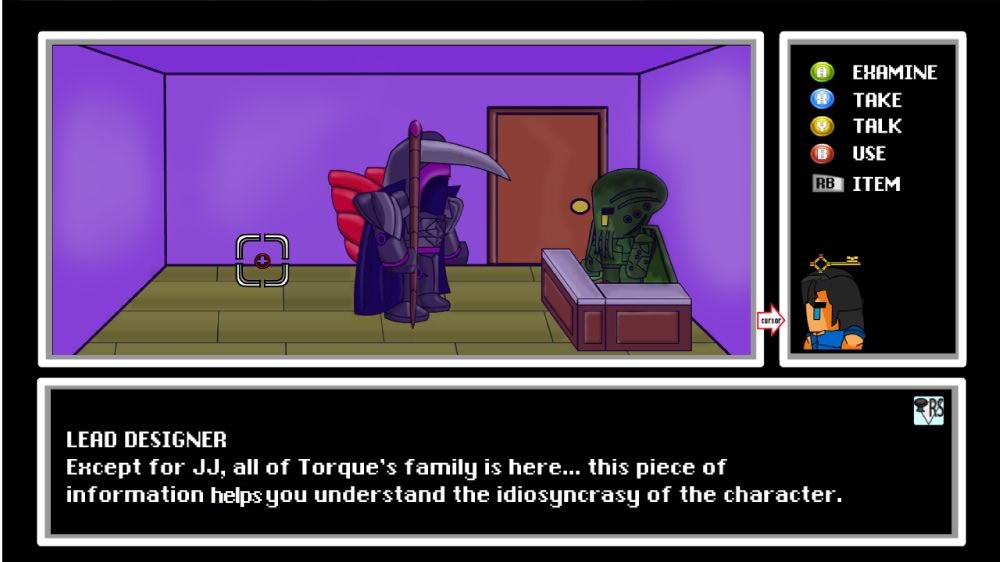 This, on the other hand, is just bad, and I don’t think it really wants to be.

Hey, now we’re back in comfortable territory for me! Point-and-click adventure games! Yaaaaay! And it’s even by a European developer, just like all modern-day adventure games. That means the writing doesn’t make sense because no one wants to hire a talented localizer (possibly because they spent the game’s entire budget on eighteen different songs whose lyrics consist only of the word “runaway” over and over and over a-goddamn-gain, not that I’m bitter).

For example, here’s a select quote from the intro cutscene. Two characters are rambling on about how they should kill their pet cat because it ate the USB pen with the prototype of the RPG they’re working on. (Just go with it. This is the part of the game that makes sense.) One guy asks if they should make a 1942 clone instead, and the other guy says:

“HE WON’T LIKE TO SWAP AN RPG WITH MORE THAN 40 DIFFERENT WAYS TO END A QUEST WITH A SHITTY SPACE INVADER SHOOTER.”

Here’s another one. When you click “examine” on a guy named Gary Jobson:

Most people who are considered to be friends by Torque [the main character] suffer come problems with alcohol and its abuse, Gary Jobson is one of them, which gives his ability to prevent a theft a “-2” penalty, this means Torque wouldn’t have too much trouble stealing his wallet which contains his credit card.

“And to think that there are some consoles which have the same specs, a little more games and still they sell, it makes you think.”

WHAT DOES THAT EVEN HAVE TO DO WITH ANYTHING?! Also, when you click “use” on the ATM—this is intended to be a factual statement—he talks about how much he wants to have sex with it.

As a professional copyeditor—someone who spends eight hours a day editing corporate reports, and then comes home to edit articles for GameCola, or proofread text for indie videogames—this just looks like a cry to help for me. Call me, friend developer. You know I’m always there for you.

Boy, that went downhill fast. I’m starting to wonder if I should just put the “best” part of the column’s name in quotes. Thanks for reading!

* For some reason, my original notes for this sentence read “why, it looks good enough to be a real videogame! puff puff on my pipe.” I really wish I knew why.

** Pro-tip: NEVER refer to your point-and-shoot camera as your P&S. And definitely not your “wee little P&S.”

So dutifully trying to be Chrono Trigger it's both admirable and depressing at the same time.