Recently, I had to decide which videogame I wanted to play next. On the list of possible games were Time Hollow, Legend of Zelda: Ocarina of Time 3D, and Prince of Persia: Sands of Time. Once I saw that half the games I wanted to play were time-travel games, I began to wonder if I am a time-travel fan.

Am I a time-travel fan? Or is it just the case that time travel seems to make things better? After all, everyone says that the best Zelda game is Ocarina of Time, the one about time travel. Same for the best Professor Layton game. Same for the best Teenage Mutant Ninja Turtles game. Maybe not the case for the Mario & Luigi series, but that’s because Partners in Time is not so much a game as it is an excuse to show off the DS’ new X and Y buttons.

Not every time-travel game is as glorious as Putt-Putt Travels Through Time or Day of the Tentacle, though. The most recent time-travel game—here, I’m transitioning into a review—is an RPG called Radiant Historia. It has the potential to be a great game, but it’s not time travelly enough. 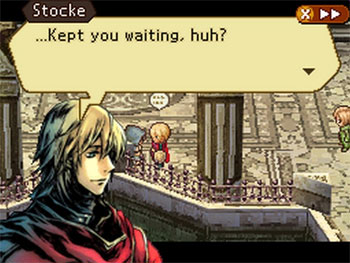 See, time travel in Radiant Historia is weird. Our hero has a time-travel book, which lets him go to any point in time he wants. He basically ignores this power for the duration of the entire game. Instead, he just jumps back and forth between two different timelines in order to progress.

Let me explain, using the game’s most disturbing challenge as an example. At one point in the game, the hero’s crippled best friend gets in a fight and ends up losing his prosthetic arm. What should our time-travelling hero do after this?

…The hero of this game decides to go with option C. Remind me never to make friends with him.

That’s how the time-travel aspect works in Radiant Historia. The hero technically has the ability to time travel to any major plot point he wants to, but he never takes advantage of it. A normal person would use his foreknowledge of the future to change things, or at least do things differently. Not our hero! At all times, he pretends he doesn’t know the future. This means he does things like walk right into traps, not warn people who are going to be killed, and not stop the villain who will eventually try to take over the world. 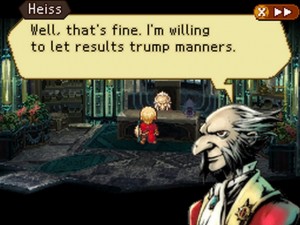 Case in point: this character. You have a boss battle against him in Chapter Two, when he has about 200 HP. He escapes after that battle, and he later returns to become the game’s final boss, with about 3,000 HP. Why doesn’t our hero just time travel back to Chapter Two and kill the boss in his weaker form?

So I guess that’s what I mean when I say Radiant Historia isn’t time travelly enough. The time-travel feature just functions as a gameplay mechanic, with a hint of plot importance at certain points in the game. It does not reflect the way a real person would use the ability to time travel. Other than that, I’d say the game rates somewhere from average to good, depending on my mood. There are a few things that are a pain, which keep the game down (such as two or three of the party members who are basically useless), and a few things that are extra fun, such as the mysterious Time Twins and the one desert level. The game just sort of oscillates between average and good; it’s your average RPG that still has it moments, but as far as time-travel RPGs go, it’s no Chrono Trigger, eh?

Really, I try not to give games such bad scores, but this one sure earned it.