When your game has the word “Amazing” in the title, it had better damn well be.

Kirby & the Amazing Mirror is a weird one-off in the Kirby series, and I’m not just talking about how it is structured. America got the game in October 2004, six months after the Japanese version and two months after the European release—usually, Europe and Australia are the last to get a Kirby game.

I held on to my spare cash and I didn’t spend anything so I could afford Amazing Mirror upon release. To sate my unparalleled hunger for Amazing Mirror, I even went as far as to play the Japanese version of the game on an emulator, waiting patiently for its UK release. Amazing Mirror impressed me considerably, and it did not leave my Game Boy Advance cartridge slot at all (besides a few rare occasions where there was enough sunlight to play Boktai). I played Amazing Mirror for so long, and so much, that I cooked the SRAM inside the cartridge, and I couldn’t save progress anymore. I was at 99% completion. Just recently, Nintendo have added Game Boy Advance games to the Wii U Virtual Console, as well as the long-awaited patch to enable the rainbow cookies that were promised a while back. Looking for any excuse to actually play the Wii U (a harsh but honest truth I must face), I jumped at the opportunity to replay the game that had so strongly imprinted upon me when I was fourteen. How has it aged? Delightfully. And you can bet your teeth I got me a 100% completion rating as well.

In Kirby & the Amazing Mirror, the eponymous airbag has been split into four by a dark figure masquerading as series antagonist Meta Knight. The new traditional-styled Kirby series villain, Dark Mind, has torn apart the Mirror World and plunged it into chaos. You and three mentally-challenged bubblegum spheroids must collect shards of a broken mirror so that the Mirror World can be restored to its original form. To do this, you are required to traverse a large, open-world map. Defeating enemies and finding items is good, but the overall goal is to locate the eight shards of the mirror so that you can battle Dark Mind and restore Mirror World. At any time, provided you have enough “batteries” for your in-game phone, you can call the other puffballs to help you complete challenges, defeat bosses and to bring you health if you are in a tight spot. 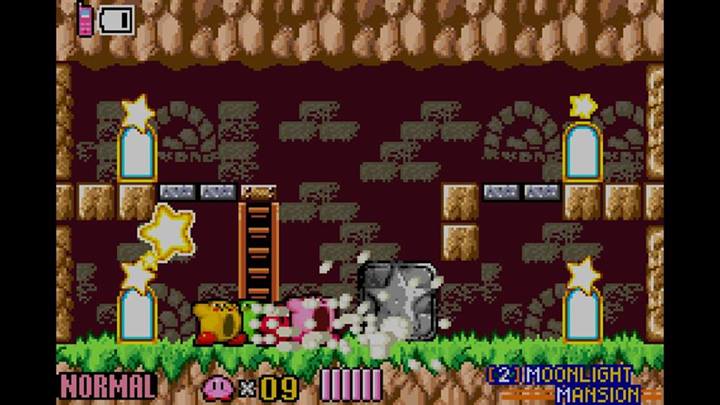 While the game can be considered to have an open-world structure, it is still a traditional Kirby game from a structural standpoint; it is just that the levels are interconnected and the game provides you with a fairly confusing map system to help you figure out where you are going. The map for an area needs to be located first, but for convenience, the room where the map can be obtained is always marked even if you do not yet have the map for the area. Once you have the map, a dark orange box indicates a room you haven’t accessed, a bright yellow box indicates room you have been to, and a flashing yellow box indicates a room where everything that can be found has been located.

To obtain 100% completion, you need to collect all maps, all spray paint (which allows you to change Kirby’s colour), all health upgrades, and music and sound effects for the sound player, as well as, of course, the sound player to play them on. Also, you need to have opened every chest, including those that contain only cherries or an extra life, as these still count toward making a room flash on the map screen. And one other requirement for 100%—that all the “goals” have been found, as levels have multiple exits but only one contains the mirror shard you seek.

Because of Amazing Mirror‘s labyrinthine world design, it can be very overwhelming and difficult to find your way. If you consistently consult the map, however, orienteering should not be a problem. Some challenges are tricky, and there are puzzles whereby only a single solution exists, but that I appreciate for it makes Amazing Mirror a tougher beast than the mostly childlike Kirby series as a whole. But still, I get this saddening feeling. After so many years, getting this 100% completion feels underwhelming. It is like the payoff for this agonising wait hasn’t paid off in full. 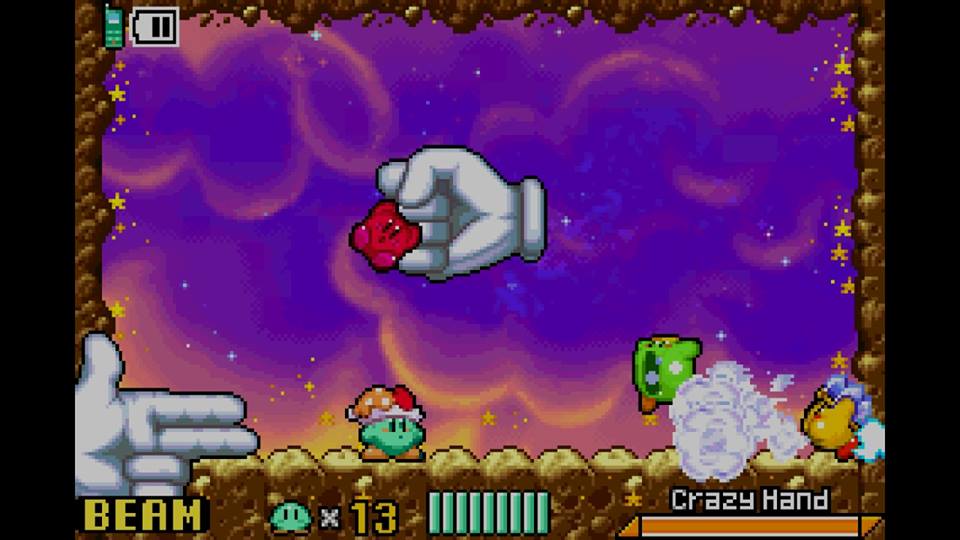 The usual splay of extras is bundled in. You can play minigames solo or against friends by linking up (features not possible in the Wii U version) and you can take on a Boss Endurance mode. Other than that, there is little available to pad the game out. From the similarity to the game visuals, menu layout, and control, I assume that this game was built from the base parts of Nightmare in Dream Land, which has more boss variety. The amazing Mirror World could have borrowed some more encounters from NiD to avoid the boss enemy saturation that most definitely happens in this game.

But as for the core Kirby experience, all you need to have a good time is present. Enemy powers to use and puzzles to complete—well, yes, that base Kirby gameplay is there. While there are only a few new abilities, amongst them is my all-time second-favourite: Smash, which provides Kirby with an authentic Super Smash Bros. Melee move-set. Kirby & the Amazing Mirror is an excellent title worth picking up and playing through now, even a decade since its original release. This Wii U release even allows you to create a “Restore Point” so that you can continue from anywhere, and it will also load up from where you were if you closed the game without saving.