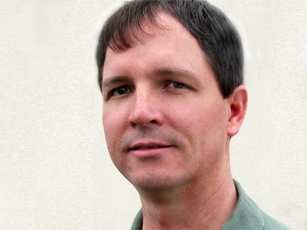 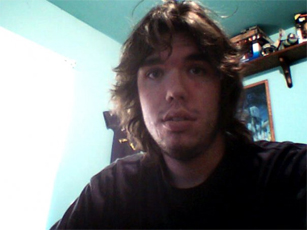 Tony “hotshot 10101” Pitman is an indie videogame developer making games for the Xbox Live Indie Games platform. His past work includes the edutainment titles Math Gardener, Math Sniper 3D, Space Math, and Math Aerobat, and his most recent title is the shooting game Zombie Sniper 3D. This is Tony’s first appearance in “Versus Mode.”

Eric Regan is a current GameCola staff member. He’s the author of “Captain Eric’s Super Thumb Feature Presentation,” in which he gives brief thumbs-up or thumbs-down ratings to games he’s recently played, and he’s one of the co-hosts of “Digital Championship Wrestling,” which simulates pro-wrestling matches between videogame characters. He also occasionally appears on The GameCola Podcast. This is Eric’s eighth appearance in “Versus Mode,” having written previously with Christian Porter, himself, Neal Iannone, Alex Jedraszczak, Steve Hamner, Casey Levine, and Steve Hamner.

1. Digital manuals are preferable to paper ones.

Tony Pitman: Even though there are many people who truly believe in going green, I would suspect that the motivation behind Ubisoft not printing manuals anymore has a lot more to do with saving money. This is not always a bad thing. Sometimes the best results come from trying to save money. As to not having a paper manual, I am torn. Personally, I hardly ever read the paper manuals anymore. I can remember a time, however, when reading the manual was part of the fun. Most of them had stories in them introducing the game. Maybe that is what is really missing…the extra story behind the game. Or maybe it is just that many games now don’t really have a story. Could it be 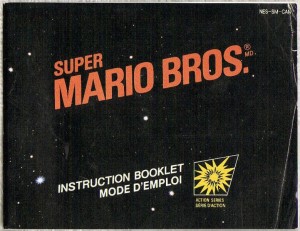 that this is the reason Zombie Sniper 3D isn’t selling as well as I had hoped? I wrote a game with zombies and fun sniping action, but no story. Hmm, would it work to come up with a story now and hack it on top of Zombie Sniper 3D, or should I just make sure my next game starts with a story?

Eric Regan: Hmmm…this is a tough one, since I don’t really use either kind of manual. But that really is just a testament to how useless manuals are! I’ve been using GameFly for almost two years and have never checked their site for a manual. Out of the few times I can remember checking a paper manual, only a handful of those did the manual actually contain the information I wanted. I would say that paper ones are probably preferable because the information you find in them is so simple and narrow that turning on a computer and popping in a disc is too much effort to follow through on. However! Since they’re of so little use, who even cares if you don’t have one!! I’m sure the guy buying the triple special edition of Halo 12 will be quite upset if his Halo instruction manual collection goes incomplete, but for normal people? It just doesn’t matter.

2. Sony should compensate PS3 owners who were using the “Other OS” feature before it was taken away.

Tony: What is our country coming to? I don’t want to get into a big debate about political stuff, but on this topic how can you not at least touch on it? Sony is a company. The last time I checked every company has the right to do pretty much what they want with their products. If customers don’t like it, they can just buy something else, right? Why do we think that it is right or even appropriate to bring a lawsuit against a company when they don’t make and provide what we want? If we keep this up every company will be afraid to produce anything for fear that their customers might sue them if they don’t like it. The ONLY people who ever make out anymore are the lawyers, and who in their right mind wants to support THEM?

Eric: Nope. Now, I have no idea what you use other OS’s on a PS3 for. I do know, though, that a PS3 is a PS3, and not a PC. So really, what could you possibly need it for that would require compensation!? You put different discs in the machine. It lets you play those discs. End of story. That article mentions that they are suing because the function is extremely valuable, yet it does not offer even one example of why it is so valuable. If you really want to use other OS’s, just use your computer. I probably sound like an uninformed douche. Really, I am OK with that. I do not care! This is just ridiculousness abounds!

3. The Virtual Boy is one of the worst inventions of all time.

Tony: I have to agree with Griffin from Joystiq that the Virtual Boy and Farmville should NOT be on the list of worst inventions ever. Griffin gives the best reason for Farmville: if it was so bad, why do so many people play it? I have to wonder about the Time author’s motivation and how they came up with the list. As I look at some of the other items on the list, I can’t help but think that maybe this list is just a chance for the writer to slam this product or that. You could also argue that one person’s definition of a success or failure is not the same as another’s. What really makes a great invention? Is the writer of the Time article talking about failure in terms of money made, people who played, or what it does for the world? I suspect it depends on the invention. With Farmville I think Time rated it as a “worst invention” because in the end they think the game is a big waste of time. Who wants to “play” a game that basically is work? Has anyone ever heard of grinding in Everquest or WoW? The one invention that I disagree with more than any other on the list, however, is the Segway. Despite it being a failure commercially, I think it is one of the greatest inventions of all time. This was confirmed for me when “Weird Al” Yankovic included it in his music video “White and Nerdy.” 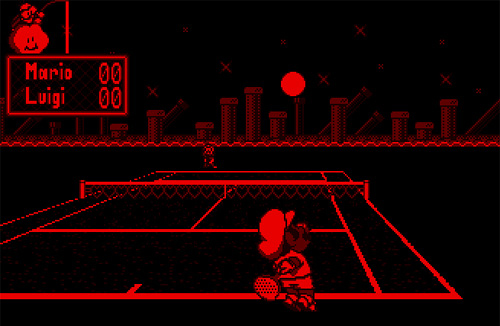 Eric: The Virtual Boy definitely belongs on this list. I mean, didn’t it cause people’s eyeballs to explode? It had ONE color! The graphics were line drawings! The 3Dness didn’t even look that good, and it gave you a headache. No one ever even talks about it or any of its games anymore. Complete disaster! Really, there isn’t much else to say except “yes.” Yes, it truly is one of the worst inventions of all time.

4. EA’s Online Pass is kind of hostile to gamers.

Tony: Online downloads are the wave of the future. Allowing the user to pay a small fee in order to join in a quick game or two of online play is the next logical step. Although this method of payment has been around for a while in other markets, EA bringing this to consoles is one of those “about time” moments. I think the price they have announced ($10 for about a week) might be a little high for the market, however. It seems like a smaller amount and rental time would make more sense. I would guess that most people who want to play a game or two of a sports game are doing so because a friend invited them to or because it is a special game night. It might be better to charge a small fee for a few hours or certain number of games more in the range of 50 cents, or something like that. The big question would be how easy EA could make it to charge and pay that amount without it becoming a pain.

Eric: Well, it is hostile to online sports gamers who buy used games…which is probably a much smaller demographic than you’d initially think. However, this could seep its way into other gaming demographics and get quite annoying quick. Unless the game is utter crap it takes a long while for a used game to get below 10 dollars cheaper than a new copy. Multiplayer options are becoming a more demanded feature, and as such we are seeing more and more games include them. Still though, for most games, most of the multiplayer action is taking place right after the release. If you ever try checking out the multiplayer of a game a year after release, you’ll probably need to know the person you want to play with. In the end, this is just going to become another obstacle to enjoying online gaming. Online gaming already has enough of those obstacles to go around!

5. What new characters would you like to see incluced in Marvel vs. Capcom 3?

Tony: I have never personally been a fan of fighting games. That is probably because I just plain suck at playing them. There are a ton of people out there, however, who love them and are very good at them. With the stick-and-button combinations and ever-expanding “venues” (background screens), I can see the draw to produce more of them. There are just some types of games where you can’t beat the gameplay. Shooters, RPGs, fighting games, etc. Sometimes I think that there just aren’t very many new ideas out there, but then a new type of game emerges. At the same time, reproducing the same type of game with newer graphics and sound never hurts, either. We still play baseball and football after how many years? Currently I am working on a new game that is a remake of one from the 80s. I can’t say any more than that, but it should be fun. Zombie Sniper 3D is a little twist on a very old theme—shoot them before 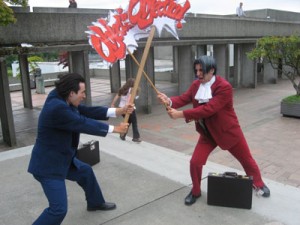 they get you. Kudos to Marvel vs. Capcom!

Eric: I don’t even remember all the characters from the last one; how am I supposed to know which characters would be new!! Now, I know that P-Zilla himself, Paul Franzen, desperately wants the entire cast of the Phoenix Wright series in the game. I am pretty sure he is giving away the soul of his first born to make sure it happens. Was Mega Man in it? It TOTALLY needs Mega Man. I mean, what DOESNT need Mega Man? The correct answer is EVERYTHING needs Mega Man! How about Deadpool? As one of Marvel Ultimate Alliance’s premier awesome characters, he definitely needs a spot. Now I know that Dan was in the last one, but…maybe more Dans? There has to be some more Dans somewhere. In some parallel universe or something. You can never have enough of Dan!

Hmmm, what else, what else… The only other thing I can think of would be the new ultimate boss for the game: Rathalos from Monster Hunter. The game definitely needs a giant dragon monster!! Who cares if it would take up 88% of the screen… Just how awesome would it be!? VERY AWESOME!!!

Do you own or write for a videogame website or blog? Are you involved in the videogame industry? Do you…at least work at GameStop, or something? Well then, you’re just what we’re looking for! E-mail Editor-in-Chief Paul Franzen for more details about participating in “Versus Mode.”