Listen guys, I’m busy. I know you want me to review Train Frontier Express, but really, I just can’t be bothered. I’ve got a lot to do. I’m just going to have random people on omegle.com review it for me.

Stranger 4: I’ve licked sweat off the balls of dead mules that was more enjoyable than this game.

Thankfully for the developers of Train Frontier Express, none of these people have actually ever played, or even heard of, the game. They’re simply demonstrating a law of the Internet that I did not take into account when putting my cunning plan into effect—that when you ask anonymous people on the Internet what they think about something they don’t know anything about, their response will always be negative and will always have something to do with ball licking, bestio-ball-licking, or the rarely seen trifecta, bestio-necro-ball-licking.

Fine, then. I’ll do this review myself, though I don’t promise any fewer references to scrotums.

Train Frontier Express joined the Xbox Indie Game library as part of the 2011 Indie Games Summer Uprising, and it passes my previously mentioned Xbox Live Indie Games Flow Chart, so I decided to try it out. 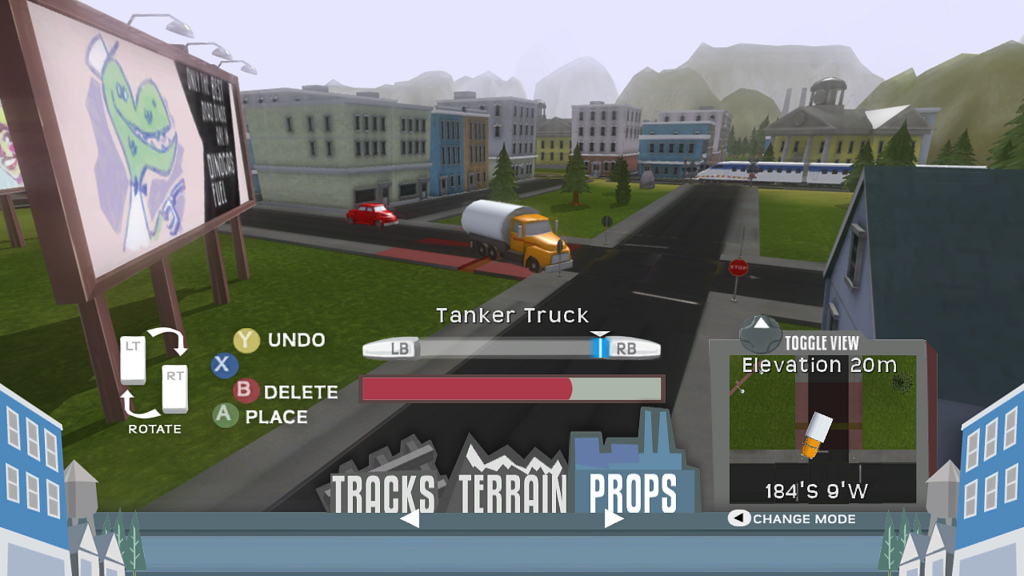 TFE is a unique game that definitely won’t appeal to everybody. In fact, let’s separate out people who will not like this game right now with a question. Would you enjoy playing SimCity if there were no goals, no people ever moved in and it was nothing but placing property and infrastructure? If you said “no,” turn back now, because this game probably isn’t for you. As for the rest of you, congratulations, you are part of the small subset of people who will probably really enjoy Train Frontier Express as an addictive timesink. The game is spent building track, editing terrain and placing props like houses, trees or billboards, and you can take as little or as much time as you like building towns, farmlands, coal mines, industrial zones and nature reserves for your train to chug along through. Whenever you want to take a break from building you can hop into the engine cab of your train and go for a ride around your world. No missions. No score. Just you, a fistful of train tracks and a big open world.

Definitely one of the nicest-looking Xbox Indie Games I’ve played, TFE has a slick, though sometimes overwhelming interface. I often found my internal thoughts sounding something like:

“OK, the left thumbstick goes down to speed up. Now I have to brake. A button? No, that’s the horn. X? No, wait, now all the controls are off the screen. OH GOD, HOW DO I GET THEM BACK? I JUST WANT TO BRAKE!“

And then I inevitably crash. Thankfully, the developers had the good sense to have the game play “The 1812 Overture” every time you crash, which I thought was pretty amusing. If I’m going to crash and explode I may as well get the dramatic soundtrack I rightfully deserve. 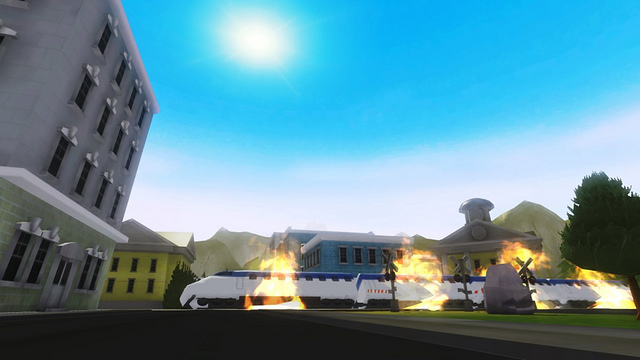 A big thing that bummed me out with the game, though, was the extremely minimal collision detection. When given a giant sandbox it’s up to you to make your own fun. My fun usually goes back to two things: drawing penises and blowing stuff up—and I already drew penises in the countryside with snow. Now, yes, I can blow things up if I make a conscious effort to delete them, but that’s not fun. Fun is crashing into rows of cars and trucks or watching your train derail into a nuclear cooling tower. Sadly, despite releasing a whole trailer about it, explosions just don’t happen as often as they could in this game. If there are cars, trucks or even buildings on the track your train just rides on through them, unfazed by its complete disregard for conventional physics. Unfortunately, this limits the sandbox-like fun in the game even further. Though, to be fair, TFE isn’t meant to be a true sandbox game; it’s supposed to allow you to build an entire model city for your virtual toy train to ride through, and it does this nearly without flaw.

There’s also a multiplayer mode in which you can go into someone else’s map, help them with their world and drive trains around with them. If you and a friend or three happen to all like the idea of building a virtual train set, then you’re sure to have a great time building and riding together. Or you can just be a bastard and delete sections of your friend’s track without their knowledge, eventually sending them to their doom.

Really, TFE is (perhaps a bit surprisingly) fun. Maybe “relaxing” is more the word—I find it fills that hard-to-fill pre-bed game slot. The one where you’re going to bed soon but you don’t want to go right this minute and you don’t want to get embroiled in some epic adventure; you just want something you can pick up and play for a little bit. I don’t know that I could play it for hours on end, but when I need a short-term time-filler it seems ideal. Lay a few tracks, make a few lakes, put down a few houses, drive a few trains off cliffs, and call it a night.

In this edition of The GameCola Podcast, Zach Rich loses his cell phone. Also, he, Christian Porter, and Justin Luschinksi talk about: What games they're playing now: RPGs, Borderlands, LittleBigPla