If you’re looking for an addictive time-waster game that’s simple to pick up and impossible to beat without bionic enhancements, look no farther than Galcon Fusion. The setup is simple: smash spaceships into planets to conquer the galaxy. Or, if you play the way I do, watch the galaxy slip out of your grasp as a superior computer player smashes ships into your planets faster than—oh, it’s over already. 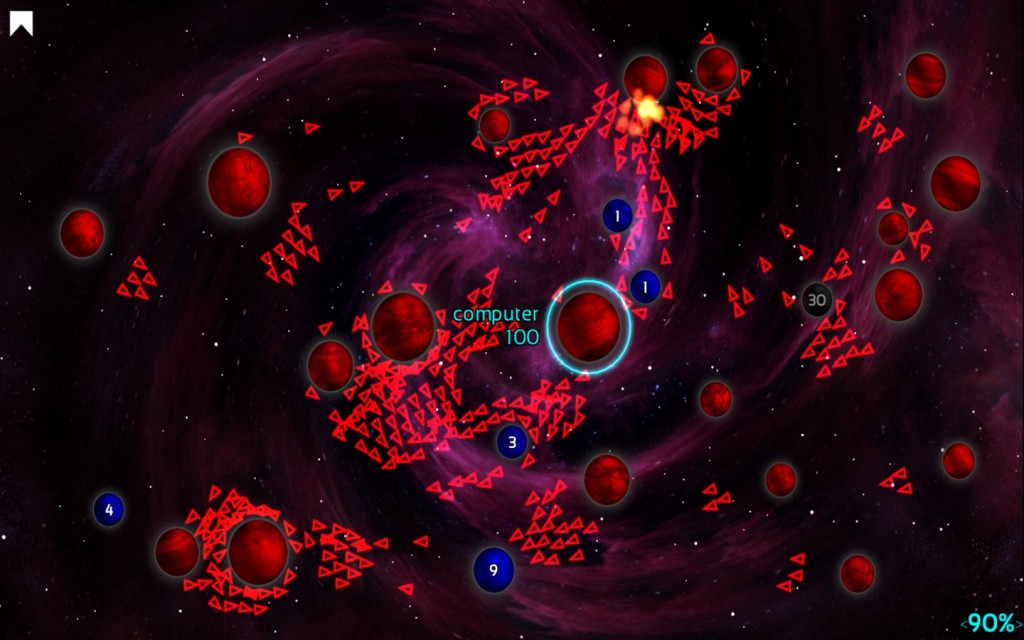 The “game board,” if you will, is a quiet little slice of outer space populated by a delicious smorgasbord of planets. The circumstances are slightly different depending on what game mode you play, but here’s the basic mechanic: You control a planet that automatically builds spaceships at a fixed rate. You then launch a percentage of your battleships at another planet. I swear, if they taught percentages this way in school, we’d all be mathematicians. Hmm. I’m getting a sudden urge to play Master of Orion II.

In the event that the planet is controlled by your opponent, attacking ships cancel out defending ships stationed there on a 1:1 basis. Either you wear down your enemy’s (ever-replenishing) defenses, or you overwhelm the opposition and take control of the planet. Unoccupied planets are functionally the same as enemy planets, except they don’t regenerate the units you’ve destroyed. That is, assuming your ships are destroying units of some sort and not just blasting X number of moon rocks until they get bored and decide to actually plant your flag there. For all I know, they might even be gnawing through the candy shell of intergalactic Milk Duds—I mean, use your imagination here. 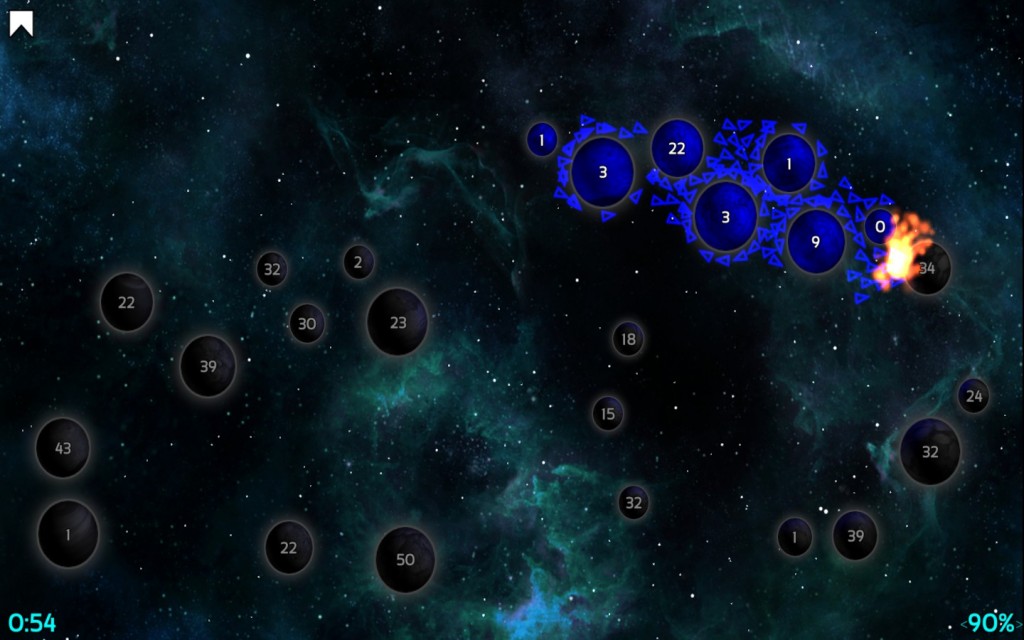 Conveniently, the number of calories in each planet is clearly labeled and visible from space.

That’s all there is to it: Automatically generate units, send them after other planets, and repeat until you lose, because you forgot to capitalize on other tactics such as sending units to reinforce your own planets and changing ships’ destinations after launching them toward a stupid target. On the easiest difficulty settings, you can really just highlight all your planets at once and click on one planet after another until you are Master of the Universe, but actual strategy and absurdly fast reflexes become an integral part of success by only the third or fourth difficulty setting. By the time you’re trying out the sixth or seventh difficulty level, you need superhuman powers to see into the future or control time to have a chance of getting a date to the prom surviving more than about thirty seconds. Twenty-seven seconds into a game. Be strong, my blue colony.

I’ve played many a game that I recognize is beyond my ability level, but I cannot wrap my head around the possibility that anyone other than a computer could strategize and react quickly enough to win the middle difficulty levels. You can retry each randomly generated map if you lose, but excessive practice only goes so far when the computer player launches ships faster than you’re physically able, in part because of the control scheme. 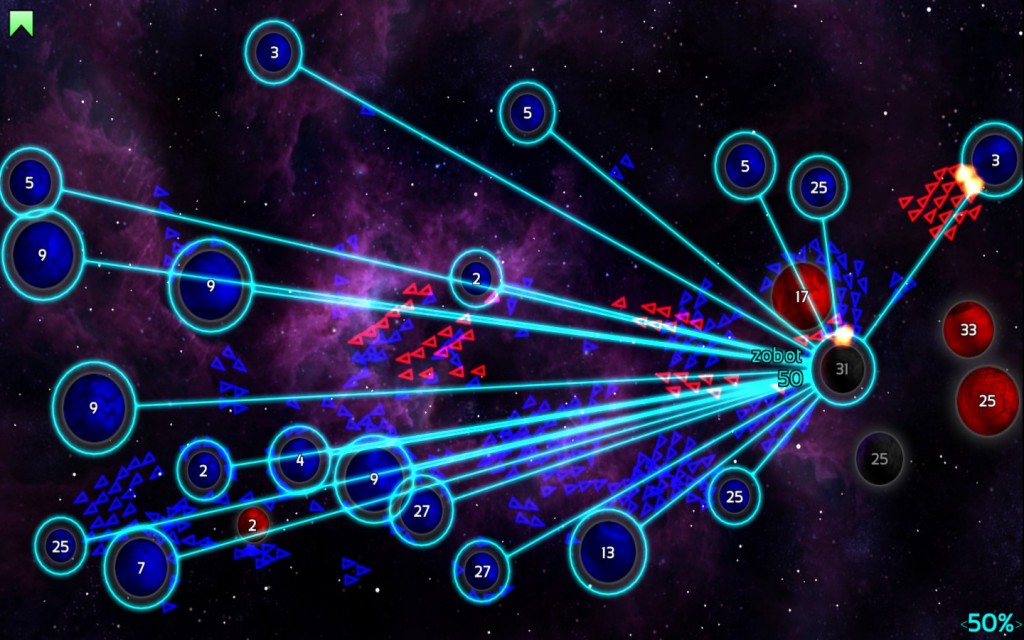 Galcon Fusion keeps things simple: left-clicking does this, right-clicking does that, and clicking and dragging does another thing. Yay simplicity. The only problem is that the same mouse click can perform multiple tasks—I lost track of how many times I selected a planet instead of sending ships to it, or deselected every planet I had highlighted because I missed the target and clicked on the empty space next to my enemy’s planet. Galcon Fusion gets incredibly frantic at times, and something as trivial as a single misplaced mouse click can cost you the game. 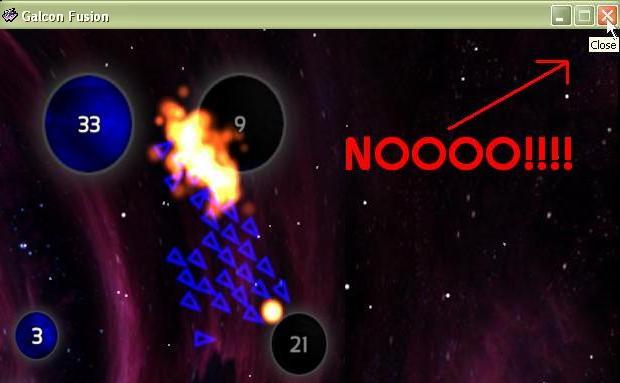 Between the online play, the obligatory achievements, a near-excessive number of difficulty levels, randomized maps, gameplay modes ranging from “enslave the galaxy in record time” to “my planets are literally bouncing around the battlefield,” and all manner of customizable options (such as “Volume” and “Screen Resolution”), it’s almost impossible to run out of things to do with this game. Barring an unforeseen lapse of interest in repeatedly clicking on circles and triangles, Galcon Fusion has enough replay value to last you until—oh hey, bicycles.

Paul: It's Digital Championship Wrestling, live from something that is definitely not the DCW Arena! Hello everyone I'm Paul Franzen, alongside Eric "Sniffles" Regan, and tonight's contest could becom