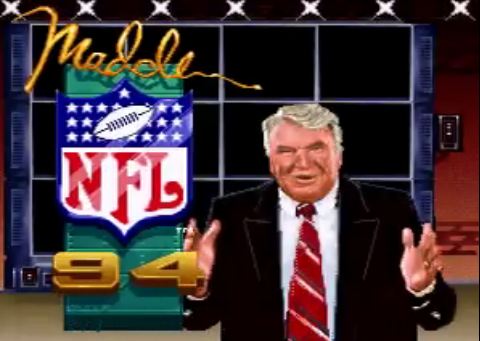 I don’t know what it was with 1994, but it sure ushered in some great sports games (well, technically, it was 1993 when the games came out, for the 1994 season). People were getting used to the Wall being down, and America was enjoying a great period of socioeconomic upturn. We had a choice of not one, but two 16-bit consoles for our enjoyment (TG-16 doesn’t count, sorry), and Madden ’94 could be played on either one. My thoughts on EA have been expressed in the past, but I’m here to whoosh you back to before all the nonsense had started.

…Er, wait. I guess the nonsense really started with the first Madden in 1992. Even back then, each new game was basically the same as the one that came before it, so what makes this one any different? Well, because I owned it, and it has a special place in my heart. Nostalgia has a funny way of polishing a turd, but I think Madden ’94 is certainly a step up from the common shovelware.

“EA Sports. It’s in the game!” While this was the first game to use that slogan, it was never clear to me what “it” was referring to. Just what is “it” and how is it “in the game”? Is “it” the American football spirit, the pride and quality of the American software developer, or something more literal like assembly code? Another unsolved mystery. But, before Madden got all realistic with penalties like “late hits,” “roughing the passer,” “pass interference,” and yellow flags on every play like the real NFL, Madden ’94 allowed us to just play the damn game, albeit with a little more realism than Tecmo Bowl. There was no “Madden Assistance” here; you had to choose your own plays and run the ball down. There was a bit of a delay after the play was over, but thankfully, you could still run around as your selected man and late-hit the other team until the cows came home the play selection screen loaded.

In later years, many soundbites were recorded by John Madden and Pat Summerall depicting specific players, plays, analyses and opinions. Back in 1994, there were a limited number of bytes to store these bites, and thus there were only five bites from Madden:

Wow, I’m glad they brought you in as a consultant in this game, Madden. Your expertise and detailed team analyses really made the (videogame) sport of football what it is today.

Is it just me, or does the opening credits song sound like National Geographic?

Maybe it’s nostalgia talking again, but the music in this game is really damn awesome. The only music you hear is during the introductory credits, with John Madden’s lips flapping around like a large-mouth bass, and in the game selection screen, but man, it was just so satisfying, like a warm burrito on a chilly fall evening. I’m all about giving credit when credit is due, but does Madden really think I’m going to watch the full credits of the game before heading to the field? With music this satisfying, you bet your sweet ass I’m going to wait!

I played a lot of this game with my brother. He would play as the 1989 49ers and whoop my ass with Joe Montana and Jerry Rice. There weren’t any actual player names in Madden ’94, but you could tell by their numbers. Sometimes I’d go in as the All-Time All-Madden team, which consisted of the best players across all times and teams, but still usually lost. It’s a fun game to get your butt kicked in.

Another great feature is that you choose your play via the Y/B/A buttons, without any on-screen selector. If you’re playing with someone else locally, they only have a one out of three chance of guessing your play. It amazes me that this “bluff” play selection isn’t on modern systems. They have more buttons on the controllers, but they’re used up on stupid stuff like asking Madden for help. So, your opponent can see exactly what play you’re picking on the more modern Maddens, unless you specifically choose some “sneak” move selection, where you press a different button to choose the real play. I guess that is even more stealthy, but it’s also a pain in the ass.

This is the Sega version. Notice the crappier voice and sound effects (the band music is added to the video). Also, the camera rotates on the X axis for some damn reason. That would drive me nuts!

If you’ve been waiting to play a solid football game with 17-year-old stats and miss the days of being forced to kick a PAT, before all the team management and setting of hot dog prices in your stadium, then Madden ’94 is the way to go.