Sorry, I had to make sure we got the required amount of punctuation up there, or Telltale fines us and takes away all of Paul’s beard grooming tools. And you don’t want to see that beard when it hasn’t been groomed. 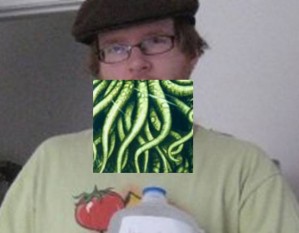 The only thing under those tentacles is despair. And another, smaller beard.

Luckily, now that I have met Telltale’s minimum punctuation quota, I am allowed to announce to everyone that Paul and I spent some time and added commentary to the first episode of Back to the Future: The Game, which was uploaded by Michael Gray and then left forsaken and alone, like so many of his illegitimate children.

And like so many of Michael’s illegitimate kids, Paul and I were able to give these videos the proper care they deserved. So come watch as Michael shows you what to do, and Paul and I talk about something completely random! You’ll learn about weddings! Episodic games! And sometimes we even have something interesting to say about the game itself!

For convenience, I’ve included the first video below. You can find the rest here, here, there, over here, behind this rock, underneath one of Michael’s kids, behind Paul’s beard, through the gumdrop forest, somewhere over the rainbow, and obscured by Paul’s incorrect pronunciation of the word “Mario.”

Stay tuned! More videos to follow. These will have less discussion about book series that Paul made up. I promise.

There's still time to support the campaign, and get all the cool stretch goals!