As husbands go, Mike isn’t the overly possessive type. I’m proud to say that we built our relationship on a foundation of mutual trust, and neither of us is particularly controlling about the other’s movements or actions. Every so often, though, Mike likes to give the rest of the world friendly little reminders about what’s what. If a guy I’m chatting with at a party gets a little too friendly, or if I start talking about a (male) person I met recently who seems a little too interesting, Mike will casually slip up behind me, put his arm around me, and give any potential rivals (real or imagined) a look that clearly says “Mine.”

So it was really only somewhat surprising when I managed to make him jealous over my recent attentions to a would-be suitor who was more “imagined” than “real,” to the point of being, shall we say, completely fictional. It all started when he got a new game in that mail that he had added to his Gamefly queue because he thought I would enjoy it. It was the latest installment in the Harvest Moon franchise, entitled Harvest Moon: A Tale of Two Towns, for the Nintendo DS. For those of you not familiar with the series, Harvest Moon is a farming time-management simulation game. You grow crops, take care of animals, expand your farm, and—while you’re at it—raise a family. Which, if you’re playing as a girl character, means finding a husband from among the many potential suitors available in the game. I therefore maintain that it was only natural for me to start flirting around a bit. 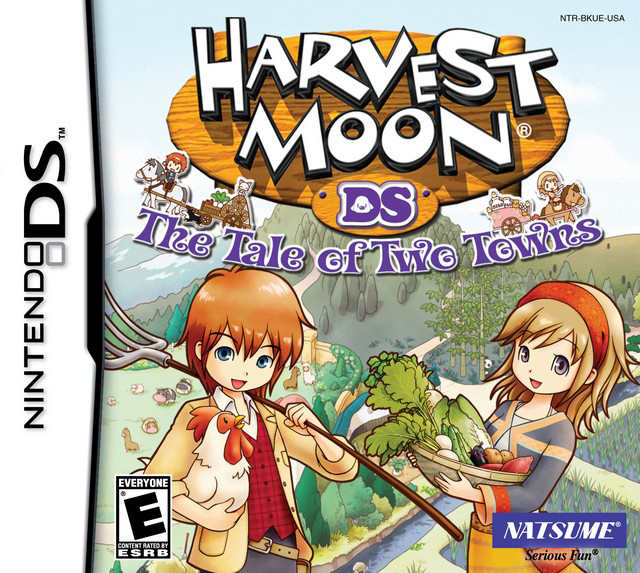 Now, I would like to re-emphasize the fact that this was a farming sim, not a dating sim, so it’s not like I was spending all my time playing the field. Actually, it would be more accurate to say that I spent most of my time working the field, and any romantic rendez-vous I wanted to set up with eligible bachelors had to be squeezed into the gaps in my very busy schedule. To illustrate, allow me to provide an example of a typical day for my character in the town of Bluebell:

(And that’s just a normal day. Four times a month, I also have to participate in various cooking festivals between the two towns, because the Harvest Goddess is absolutely convinced that regular bouts of yelling between the two mayors is the ONLY WAY to get them to be friends and thus end their generations-long feud. Because that makes sense.)

As a female farmer, I had my choice of six potential husbands: Ash the farmer, Cam the florist, Hiro the medical assistant, Kana the horse whisperer, Dirk the letter carrier, and Mikhail the musician. Of these, Ash and Cam were the most viable candidates, since they were both accessible right from the beginning of the game, and were also both residents of Bluebell, the town where I had chosen to make my home. After little deliberation, I quickly settled on Cam, the cute florist who liked cats and was the first to pay any real attention to me. Having fixed on a target, I began to shower him with gifts and follow him around, hoping for opportunities to get a date.

When I informed Mike of my in-game romantic aspirations, he showed little surprise (he is, after all, a gamer, and therefore familiar with the Harvest Moon franchise); but he was slightly nonplussed by the enthusiasm with which I was undertaking my quest. “Oh, I see how it is,” he said, half-mockingly. “We’ve been married for less than a year and you’re already throwing me over for Cam.” Within a few days, it had become a running joke: “Are you going somewhere with Cam?” “Did Cam say that to you?” “How are things going with Cam today?”

It probably would have gone on like this for quite a while longer, but meanwhile, a subtle change was taking place in-game. I definitely still liked Cam, but more and more, I had begun to take notice of Ash, the farmer who lived next door. Ash was gregarious where Cam was shy, upbeat where Cam was somber, effusive where Cam was laconic. His cheerful kindness toward me stood in stark contrast to Cam’s immense stores of reserve, and I found myself suddenly unsure of my choice. Without a clear idea of what to do next, I followed the tradition of dramatic love triangles everywhere, and began to cultivate both relationships side-by-side, to see how they developed.

Surprisingly, this decision rankled with Mike. Instead of delighting in seeing Cam get taken down a peg, Mike discovered that he kind of felt for the guy. Yes, Cam was a rival for my affections, but he was also a bro, dammit, and the Code of Manly Solidarity did not permit him to stand idly by while another man was being so slighted. Jealousy subsided into pity, and Mike couldn’t help but reproach me for my fickleness. “You’re being quite a hussy, you know,” he told me. “You’re just going to end up hurting him in the end.”

Little did he know how right he was.

It turns out that Harvest Moon has certain controls built in to discourage players from being overly liberal with their affections. Basically, if you get a couple of guys past a certain “friendship” level, and you start ignoring one while continuing to date the other, the guy who’s left out starts to get really mad at you. Known as the Jealousy Points system, it is described by one FAQ guide as “such a minor issue that you might never even notice it” because jealousy points reset so easily. Um, right.

One day, as I was walking along the forest path to do my foraging, I ran into Cam going for a walk. Normally, such an encounter would have resulted in him asking me on a date, but instead, he just looked at me coldly and told me he “wasn’t in the mood to talk right now.” He softened somewhat after I apologized, muttering something about “I guess I was just misinterpreting things,” but the message stuck. Going forward, if I want Cam to continue talking to me, it looks like I’m going to have to keep going on periodic dates with him, just to keep him happy. Of course, seeing as how I am now currently planning my impending marriage to the other guy (it’s official: Ash just proposed to me last night), this might get a little…awkward. 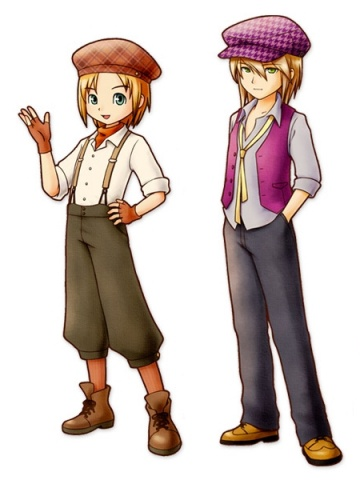 Also, did I mention that
Ash and Cam are best friends?

When I think about it, this is probably why I spent so much of my real life avoiding these kinds of complicated romantic entanglements. Granted, a little drama in life is inevitable; but in general, I find that I would much prefer a mature relationship between two loving, independent-spirited adults to such juvenile displays of petty possessiveness.

Across the room, when he thinks I can’t see, Mike gives a smug little smile. “Mine,” he murmurs softly, and turns his attention back to his game.

Welcome to "The Grass is Always..." For those of you who weren't reading GameCola in 2006, the general idea of this column is that two people play a game together, and someone tapes it. Then all the r