This is the ultimate omnibus edition of the Sonic Generations review. Bring some popcorn.

Sonic the Hedgehog games have been mostly disappointing over the last decade. People who absolutely abhor the “modern” Sonic games are telling me that Generations is “the best game since Sonic Adventure 2.” By what standard are they rating the game? Are they clocking Generations on its actual merits (if it has any) or are they basing it on a decade of Sega’s poor decisions?

Or, are they just being elitist so-‘n’-sos who are overwhelmed by nostalgia? Yeah, I reckon it’s that one.

My interest was piqued by the positive reviews, and for me curiosity is a dangerous thing. It plays upon that inquisitive part of my psyché that is always excited to discover something new. This alter-ego threatened me that if I didn’t buy and play Sonic Generations, he would tell the whole Internet about my browser bookmarks, especially those inside the folder labelled “Paul’s Sexy Beard.”

Paul’s Sexy Beard, eh? I wonder what that contains.

I gave into his demands because, like they say, you should always listen to the man with the gun. I’m glad I listened, as not only are my brain and skull still intact, but also Sonic Generations is really great. I’m not lying when I say it’s a notch above some of the other games Sonic has recently starred in.

I personally enjoyed the dramatic story of hedgehog/human romance that caused so many a sick stomach. As far as I’m concerned, I never thought that Sonic needed to redeem himself. But if I had, then I would have forgotten about all that right in an instant, as Sonic Generations has improved the azure rodent in almost every way possible.

No matter how heinous his past crime, Sonic the Hedgehog is forgiven. 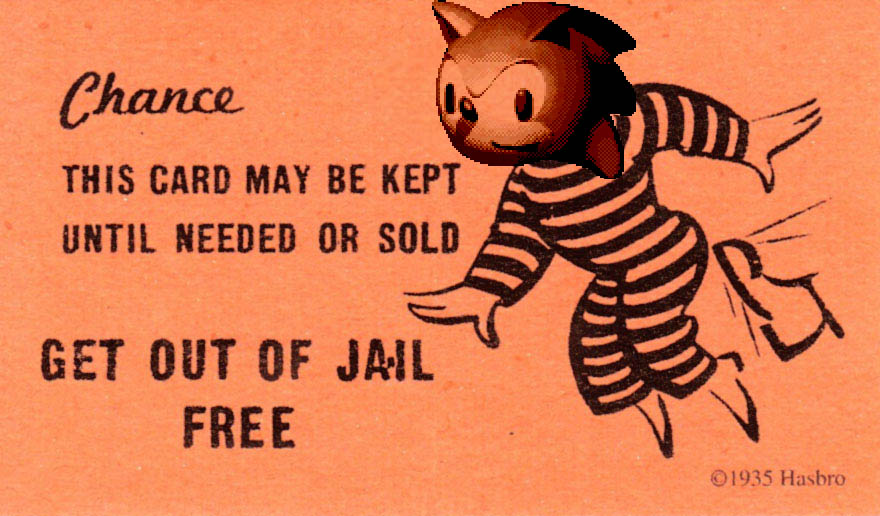 He played this card, presumably.

The Thick of It

What it boils down to is that Sonic Generations is Sonic Colors and Sonic the Hedgehog 4 tied together with some rainbow-colored twine. It takes elements from every Sonic the Hedgehog game ever released in some shape or form, even if some of those elements are so vague that you won’t even realise they’re there until someone tells you.

Even the music choices can be vague. During the race challenges, for example, the default music is a remix of “Super Sonic Racing” from Sonic R. Not obscure enough for you? Well how about this: that remix contains audio from a 1996 television commercial for the Sega Saturn. 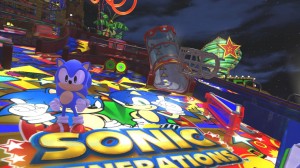 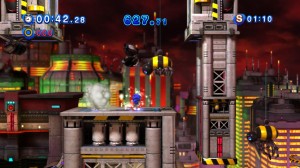 Sordid Revolutions has a far more incredible and memorable choice of stages than appears on paper, though I’d argue that, with each Sonic game represented in a level, a few alternative zones might have been much better suited for this game. There are definitely much more interesting levels in Sonic Adventure than the featured choice, Speed Highway. Saying that puts me on the spot to prescribe a better one, though.

Saying “Lost World” would have had me shot for sadist intentions, so the only other suitable choice for Generations is Twinkle Park. Inclusion of this stage would have made perfect sense, given all that the developers would have had to work with: the driving, the rollercoaster, the park attractions, and even what would happen if Sonic were finally allowed into the Fakery Way.

Moreover, they could have implemented a chase sequence where you escape from a bag of bolts.

“I may be a chunk of cheesy hardware, but imagine what they could have done with me!”

Sonic the Hedgehog 3 & Knuckles being represented entirely by Sky Sanctuary, I cannot complain about. That said, Sonic the Hedgehog 2 could have used a better level than Chemical Plant. You know…Wing Fortress, anyone? Not only is Chemical Plant in Sonic Generations, but the battle with Doctor Eggman in the Eggman Robot and Casinopolis appear in the game, too.

Casinopolis Zone is represented by a pinball-table level, which is interesting but pretty much plain pinball. Worth note is that this DLC already exists on the game disc in its entirety and is unlocked by download, stripping Sonic Generations of the perfect score that I would have loved to bestow upon it.

Point made, moving on.

Each stage in Generations can be played as both the “classic Sonic” and the “generic Sonic,” each with their own abilities, traits and moves that allow them to traverse their entirely separate environments. Classic Sonic has classic 2D stages, while generic Sonic has a combination of wide open, linear and sideways sections.

Lost were the opportunities where Sonic Team could have had the classic and generic Sonic characters meet at the end of an incredible stunt, implying that the two of them are playing the levels in tandem. Although, part of me is glad that they didn’t do this. Keeping the levels separate is what makes Sonic Generations more accessible and more enjoyable—knowing that it’s like playing two games based on the same premise, rather than one long game with double the levels. 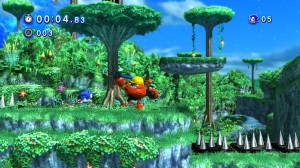 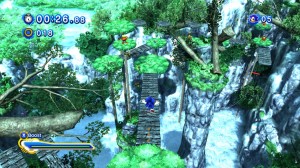 Sonic Generations would get boring quickly if you were only playing as the classic Sonic. He is slow, sluggish and slothsome to control. Just like on the Genesis, by the way. This analogy works best: have you ever gone to the supermarket and left with a cart full of groceries? Once the cart is full, it’s almost as though it has a mind of its own, veering off to one side.

That’s what classic Sonic feels like at all times.

That said, if generic Sonic was the only playable character in Sonic Generations, I wouldn’t have been disappointed at all. It seems like Sega borrowed his physics, movement and speed directly from Sonic Colors. I am impressed by everything in Colors. The visual direction, the quality of the graphics and the feel behind Sonic and his moves. On the downside, the Wii still cannot output high-definition, making Sonic Colors cursed to be standard definition to the masses.

If you just own a Wii and are disappointed that Sonic Generations didn’t come to your system, then get Sonic Colors if you haven’t already. You can just imagine you’re playing the best parts of Sonic Generations. 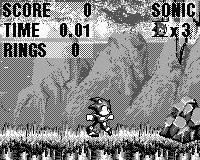 Before Sonic “Colours,” there was only Sonic Monochromes.

As for the content in Sonic Generations, you’re getting everything besides the kitchen sink. (I don’t think I’ve found one of those in the game yet.)

For each stage, there are two acts. Then there are five challenges per act, making ten challenges per stage. With nine stages, there are ninety challenges. Impressed yet? And these levels aren’t wimpishly developed, either; they’re carefully constructed and based around power-ups and skills that can be earned by completing them. There’s something almost impossibly addictive about completing challenges to unlock the bonus music tracks, concept art and skills. 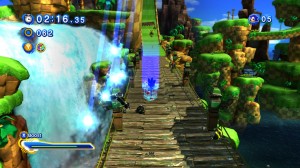 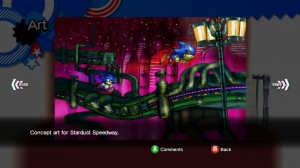 Each act and challenge are rank based. Depending on how well you’ve scored, you can earn an S Rank, which is the completionist’s rank for this game. To get an S Rank on a challenge, speed is all that matters; you just need to quickly complete a level without dying. Some S Ranks are easier to get than others, but once you’ve played the level a few times you’ll know what to expect.

Also, Sonic Generations covers generations of bosses. Besides those bosses that appear from previous Sonic the Hedgehog games as the main story bosses, there are also rival battles against Shadow, Silver and Metal Sonic. All of these need to be beaten to finish the story, and they add even more depth to the game. 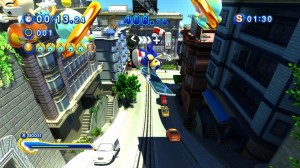 This can only be interpreted as being an apology for “IT’S NO USE.” 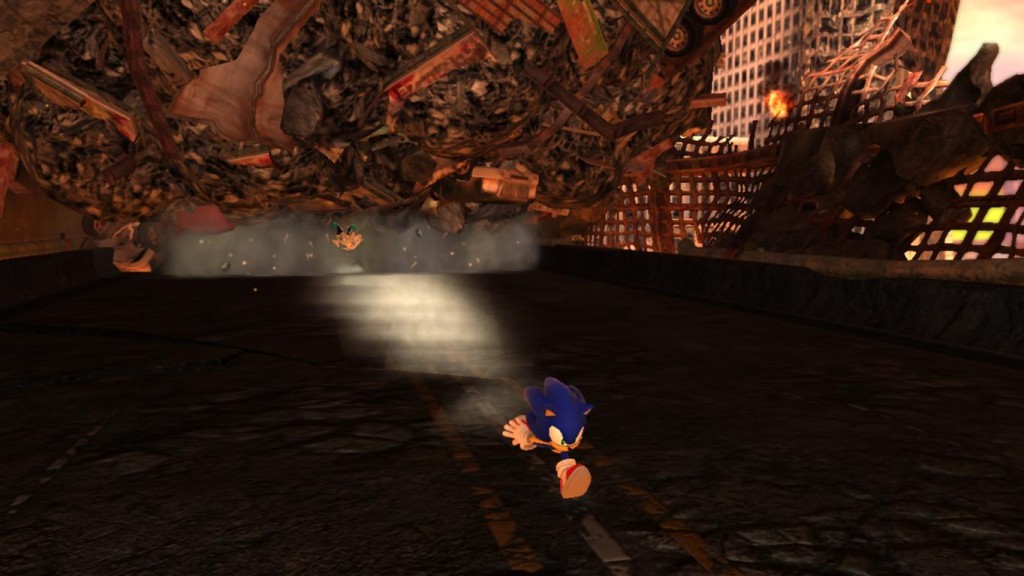 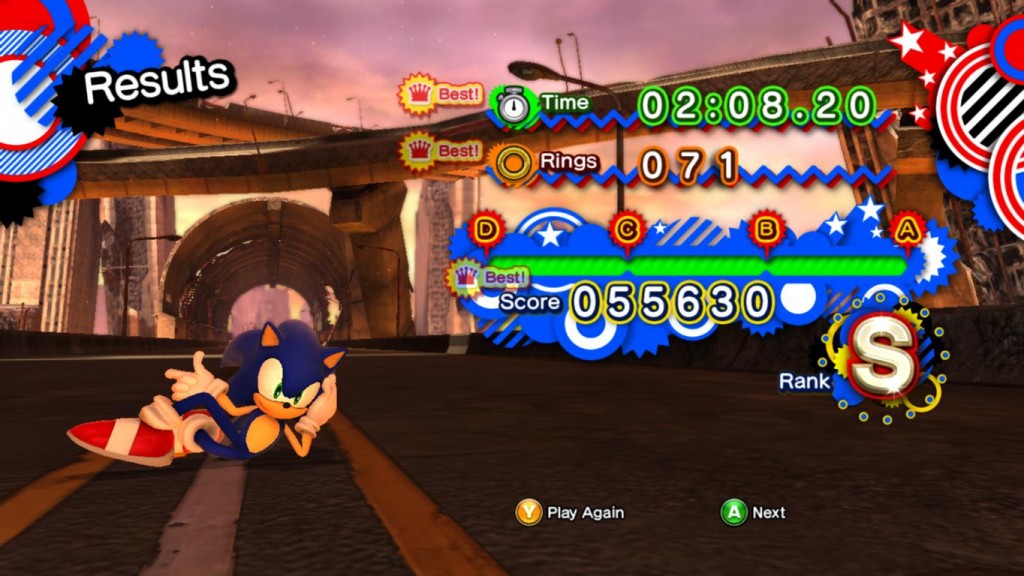 Congratulations, you killed one of your own species really fast!

Unfortunately, Sonic Generations has a very short and barren story. It can be beaten not only in an evening, but in a single sitting (clocking in at well under four hours). The brunt of the leftover experience is spent collecting Red Rings and completing challenges. The story is fairly well written and is almost non-stop poking fun at some of Sonic’s worst games. Overall there isn’t anything remarkable about the story, though.

To my disappointment, there were absolutely no jokes about Sonic the Werehog, as far as I could tell. I do swear they made a reference to Secret Rings or The Black Knight, but I can’t recall what it was off the top of my head.

Sonic Generations is an undeniably exceptional game, especially where past efforts are concerned. But this praise comes with a price—you need to play this game on a console, rather than on the PC like I did.

The PC version is very annoying in all aspects, especially the configuration and machine specifications. If you’re slightly under the minimum specification for RAM, there will be jerking movement and minor short freezes on any level with an abundance of smoke effects.

It doesn’t matter that your graphics card is shit hot. 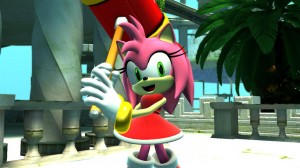 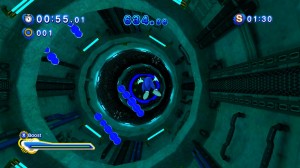 It doesn’t ruin the game experience at all, but it caused my character to die unnecessarily a few times, so it bears mention. This computer runs The Elder Scrolls V: Skyrim on Ultra settings, and it can’t handle Generations properly. You heard it here first: a resource hungry Sonic the Hedgehog game. Usually they’re only starved for attention.

The PC version also suffers from poor controls, which can only truly be fixed by using a Microsoft Xbox 360 Wired Pad (or Wireless Pad if you have a suitable reciever). All the in-game buttons and commands refer to the Microsoft controller. Saints Row 2 had this problem with the PC port, but on the flip-side at least this port doesn’t look like total bloody crap. 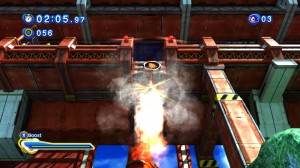 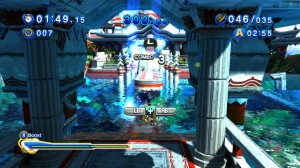 The PC version treats the d-pad and analogue stick of any PC gamepad correctly, so the game is playable with any third-party controller. A decent USB gamepad is easy to find nowadays and fairly cheap, and it’ll provide a much more enjoyable experience than playing with the keyboard.

This game should keep any Sonic the Hedgehog fan satisfied. Through prostituting the past and profiting at present, Sega are paving the way for the future. With this fantastic game that any platform gaming aficionado should try, Sega can finally convince everyone that Sonic the Hedgehog is once again relevant.

If they had fixed the controls and allowed us to tweak some of the special effects, this game could have scored even higher. I can appreciate all of the brilliant things Sonic Team has tried this time around. Everything is as it should be, more or less flawless. 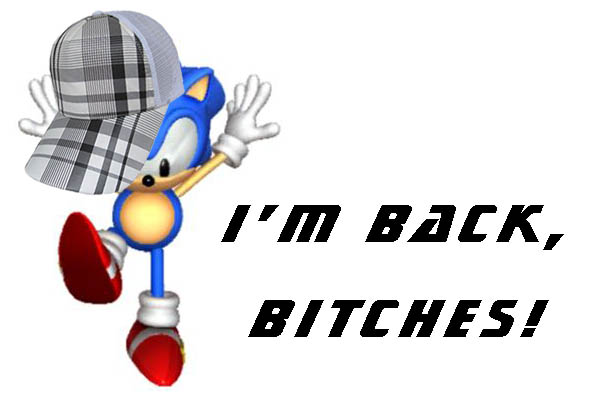