PAX East 2012 has come to a close. Lines were stood in, games were played, and fun was had. 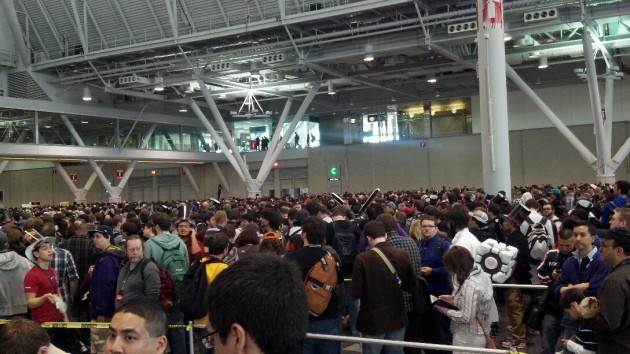 And that’s just the line for the men’s room.

Before we start, I would like to address something my wife and I both noticed. Not a single person that we saw playing a 3DS in any line we waited in (a lot of people) was playing with the 3D effect turned on. This reminded me of a quote by someone I consider to be a forward-thinking genius in the videogame industry:

“This [3D on/off switch] is great, because [it] will probably be in the off position permanently after the first week of owning the 3DS, after you realize that you’re tired of the novelty of 3D and would like to play Pokémon Plaid/Paisley without getting a goddamn migraine.”

The majority of my PAX journeys took me around the Expo Hall itself, so I’ll give you a very quick rundown of what the main floor had to offer:

Well, it looks like this Kinect crap isn’t leaving any time soon. Xbox’s offerings this year were just about all Kinect-based, so, naturally, I skipped them. The only thing that wasn’t Kinect was Rock Band Blitz, a new Rock Band game. Blitz is not played with a plastic instrument but, rather, with a regular controller. So Harmonix, who created Guitar Hero because rhythm games were kind of boring with a controller, has decided that the best way to make the flagging rhythm game genre relevant again is to go back to playing it with a controller? Best of luck with that.

Square-Enix used to mean something. The best visuals. The best music. The best storylines. The best gameplay.

Not anymore. Now they’ve become nothing more than a bargain bin crap factory, sponging off other developers who have better ideas. Literally every single thing S-E showed on their expo floor was incredibly derivative, even by the admission of their own employees.

Risen 2: The sequel to the non-hit Risen brings a choppy, awkward follow-up that was fervently requested by thousands upon thousands of nobody. Wants to be a poor man’s Skyrim, only really succeeds at being a poor man’s Two Worlds. You don’t need psychic thumbs to know how this one’s going to turn out.

Heroes of Ruin: This 3DS game is kind of like Diablo and Torchlight—an observation pointed out to me by the guy running the booth. I’d more say that it was a soulless rip-off of those games, but I can understand he has to puff it up a bit.

Sleeping Dogs: It’s Grand Theft Asian. GTA 4 in Hong Kong. Even the HUD is ripped off, right down to having a cell phone take up the lower right corner.

Wakfu: An MMORPG based on their game Islands of Wakfu, which itself is decidedly similar to Bastion.

Final Fantasy: Theatrhythm: Theatrhythm continues Square Enix’s long-standing battle against Nintendo to see who can get away with releasing more masturbatory self-tributes before people catch on and demand they make a good game. This one is just a rhythm game with some RPG elements set to Final Fantasy music with cute-as-buttons Final Fantasy characters. It might actually be good if you like rhythm games. I don’t.

D’aww, that’s the cutest lack of fun I’ve ever had.

Quantum Conundrum: This game gives players the ability to alter the physics of their world. Make items feather-light, heavy as steel, slow down time, etc. When playing it I found it had a strong Portal vibe to it, right down to a disembodied voice cracking snide jokes while you play. This is when one of the developers told me that the co-creator of Portal worked on it. Then my wife broke a man’s heart:

Developer: “So, what did you think? It was the next Portal, right?”
Melanie: “Uh. (long, awkward pause) Meh. It was all right.”
(we walk away)
Me: “Mel, did you know that guy was one of the devs who made that game?”
Melanie: “Oh, no, I thought he was just working the booth. Fuck him. It’s his own fault for comparing that game to Portal.”

Truth be told, I liked Quantum Conundrum, and I’ll probably pick it up on XBLA when it comes out. But it’s no Portal.

Most of Capcom’s booth seemed to be reminding us that Devil May Cry HD Collection and Resident Evil: Operation Raccoon City still exist and to please buy them, but they also had two new games they were pushing. One was Dragon’s Dogma, which I didn’t get to really see but is a dragon-based action game of some kind. The other was Steel Battalion: Heavy Armor. I didn’t like Steel Battalion 1, but I respected its balls, and make no mistake: to release a $200 mediocre mecha war game that comes with a monstrosity of a controller that you can only use with that one game—that takes balls. 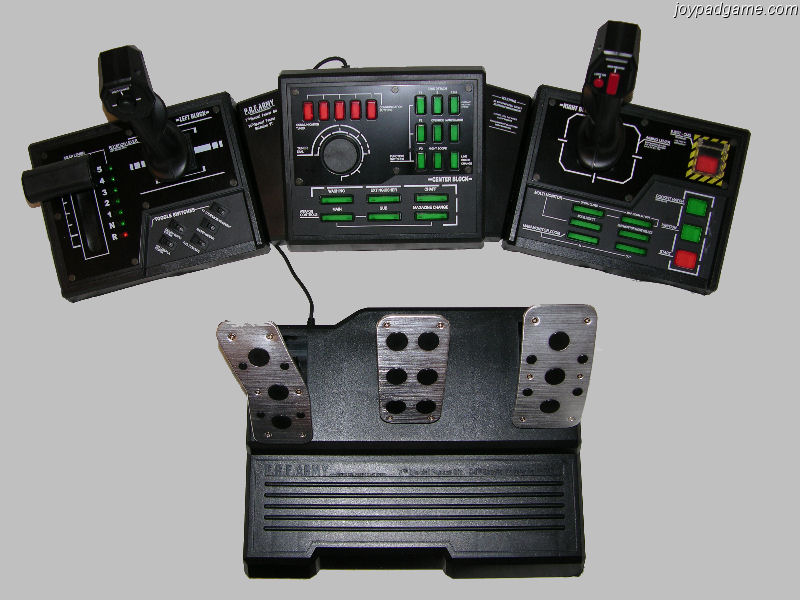 Steel Battalion: Heavy Armor plays it a bit safer. This one just uses the controller for most combat and Kinect for such mind-blowing features as buckling your safety belt and changing gears—which are of course important to any good videogame.

Spec Ops: The Line: Ironically, The Line was one of the only things at PAX that didn’t really have one. The game promises to be a “modern military shooter that challenges players’ morality”, which marks the 117th time I’ve heard a game described that way this year.

Civilization V: Gods and Kings: I was surprised to see this one here. I really didn’t think a Civ expansion pack would be given a full booth of attention, but it does look pretty cool. This one brings in-depth gameplay based on world religions and revamps spies.

X-COM: I’ve never played the original X-COM, unfortunately, so I couldn’t tell you if this new iteration in the series lives up to the original, but scuttlebutt around the floor is that it hit all the right notes and looks very promising.

Borderlands 2: Easily the most popular booth of the show, Borderlands 2 was constantly overflowing with people wanting to give it a play. Thankfully, I did get to give this one a try and it was great. This one’s going to be focusing a lot more on story than the original Borderlands (seriously, I still have no idea what the story was). It also has new classes to choose from and looks even nicer with bolder colors and crisper cel-shading this go-around. It doesn’t look like a whole lot is going to be changing from the original Borderlands, and I am completely OK with that. 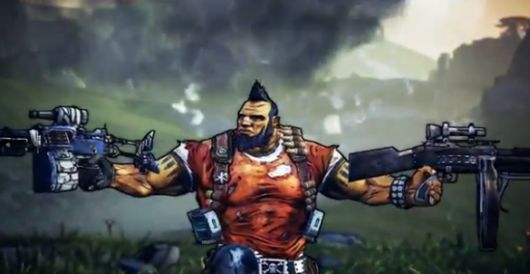 Max Payne 3: Rockstar is anything but stingy with the freebies, so much so that I now have Max Payne shirts for every day of the week and enough stickers to cover every surface in my home. So, yeah, Max Payne 3 was great. Granted, I didn’t play it and have never really cared about the Max Payne games, but I’m easily bought. 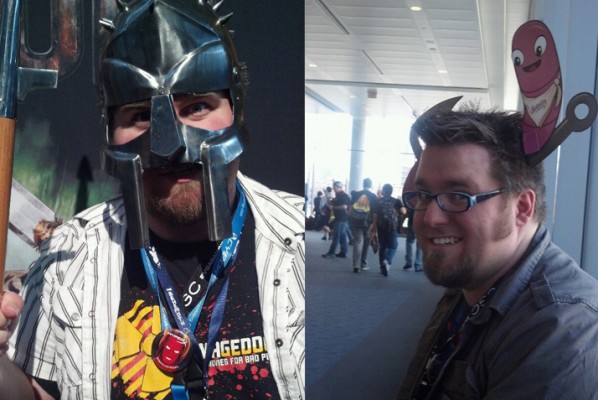 Pictured above: A whore who will do or wear anything for free crap.

Assassin’s Creed III: The Revolutionary War seems to be an odd place for AC3 to take place, since battlefields are often outside of cities, taking away the normal buildings and other structures the assassins in previous games have gotten so accustomed to climbing around on. This is being accounted for with tree parkour and take-downs that seem to have borrowed a good bit from Batman: Arkham City.

Hell Yeah!: An interesting Metroidvania-type game in which you play as a skeleton rabbit cruising around Hell and kicking the asses of all its denizens.

Sonic the Hedgehog 4: Episode II: I didn’t play this for two reasons. One: the line for Aliens: Colonial Marines was wrapped around it and I didn’t really know where the Sonic line was in the mess. Two: I played Episode I. No thanks.

This booth was almost entirely a rehash of everything they were promoting last year, except for Suda51’s upcoming Lollipop Chainsaw. A game that promises vulgarity, violence, and T&A and plays like a grindhouse movie. I’m not sure if this is going to be Oneechanbara all over again, or if this could actually be kind of awesome.

Not a household name, indie developer Ronimo Games has a hotly anticipated game coming to PSN and XBLA called Awesomenauts. The game kind of plays like a combination of Worms’ crazy 2D combat crossed with Team Fortress—and it’s a combo that works. I was able to play it for a bit and had a really good time. The game supports local split-screen, online multiplayer, and combined local and online multiplayer and is going to be available for purchase in May.

Absent. As was The Last Guardian. Again. I WANT MY FREE PLUSH GUARDIAN!

Outside of the expo halls, after hours, there was a PAX concert series of mostly videogame-related bands, including The Minibosses, who I had no idea still did stuff. Also, I was introduced to Protomen—who I originally wrote off as being a band I probably won’t like because I’m old and grumpy and don’t like anything. I was very wrong; they were an incredibly talented band who do an amazing dystopian rock opera based on Mega Man.

If you’re anywhere near Boston for PAX East or Seattle for PAX Prime, I highly recommend checking it out next time it comes around. It’s a great time and, compared to most other gaming conventions, incredibly affordable.

North & South really isn't a game that will hold your interest for longer than a commercial break.