This article periodically saves data to the hard drive. Please do not power off your computer read this article while the hard drive light is on. If you do, we will automatically erase all your data and brick your system, even though turning it off probably won’t do anything on its own.

If you’re a PS3 owner like me, you’re probably quite familiar with the above phrase. Since every game these days has some sort of persistent save data, Sony feels it is necessary for you, the willy-nilly gamer who likes to rip the power cord out of the wall any time you feel like it, to acknowledge that you must not do this every single time you play. You fools. As a moderately skilled software developer, I can tell you that simply presenting a warning telling a user not to do something certainly doesn’t mitigate the problem much, and it may just annoy them to the point of not wanting to use your crappy wares. There’s nothing that you can do if the power goes out (unless you have an uninterrupted power supply); it’s part of the risk of using persistant storage. But Christ! Just let us play the damn game! I’m willing to accept a warning for the first time the save file is created, but when I’m 100 hours into Skyrim, don’t you think that I’ve gotten a hang of saving the game? I’m assuming that game developers are forced in to this with an API, as many games have their own themed warning screens. But this is merely polishing a turd. It makes little difference!

If you’re like me and have to evacuate your bowels every so often, you’ve acknowledged that it takes a fair amount of time to load up games these days, and you yearn for the days where you could turn the game on and let it sit unattended while you do your business to return to a hot start screen rarin’ to go. These days, you have to go through 10 different screens acknowledging the developers, graphics engines, “Powered by XYZ” screens, etc. It’s painful, but at least these screens advance when unattended. But not the hard drive warning screen…nope! Sometimes it takes 30 seconds or so for this to come up, so you have to jump and dance around holding your bladder until you can acknowledge the hard drive warning and rush to the bathroom.

What the crap, Sony? You encourage us to upgrade the hard drives of our systems by giving us a very nice backup and restore feature for your system. I can go on Newegg and buy an off-the-shelf laptop hard drive, pop it in, and be good to go, and keep my warranty! So you trust me to backup, restore, and install a hard drive, but you won’t let me save games and turn off my system without holding my hand?More recently you’ve had the gall to mandate a firmware update that adds additional boot time by putting this piss-ant warning telling us to “read the instruction manuals carefully before playing for important health and safety issues.” Again, just tell me once. How many people have been shipping their systems back for repair because they dumped acid on them? You may warn us not to pour RC Cola into our game consoles, but it’s still going to happen. It’s not as if we’re doing it on purpose. Do you honestly think people ever read the manual at all, except perhaps to figure out how to hook up the system? My brother and I used to slam our fingers into the NES cartridge door, and we were proud of it! You used to be cool, Sony! 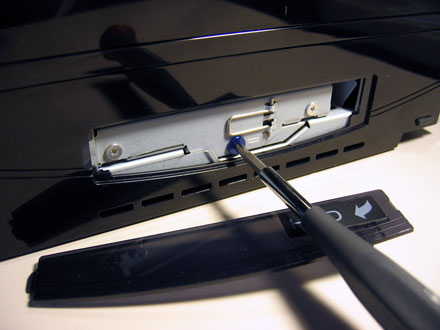 In addition to this hard drive fiasco, the two games I’ve played recently, Battlefield 3 and Skyrim, have to synchronize my Trophies with some server. I’m not sure if it’s actually synchronizing my Trophies, or checking to see if there are new available Trophies from DLC that I refuse to buy. Either way, it’s quite annoying. Battlefield 3 also has to load this Twitter-esque feed of news information and a Battlelog showing my friends’ recent achievements in the game. The news is pretty pointless. It’s either telling me about DLC that came out in November, or something that’s scheduled to come out in August. Again, a simple check can be made to see that I’ve already read the news story 50 times and probably don’t need read it again. After craming all this crap in, EA decided to remove in-game gun descriptions and statistics. Oh wait, I’m sorry—there are in-game gun statistics, but only when you first unlock the weapon can you read it, after you log in to their website, link your PSN account to an EA account, and fuse some crap together and…still no weapon details. I have a free Android app that does more than these two combined! I simply want to get in to a game quickly and look at some basic stats and progressions. Is that too much to ask? What the crap is going on, people?!

Oh, and don’t get me started with the fact that, if you buy this game used, you must buy an Online Pass to play the game online. This costs I believe $10, so buying the game used for $45 will only save you $5 in the end. In the case of Battlefield 3, if you bought the Limited Edition used, the Limited Edition pass code (free access to DLC) is a one-time-use thing, and isn’t built in to the disc, so that’s another $15. Give me a break, people.

This video is right on the money.

I have a weird history with the Mega Man Zero games. On the one hand, I really, really like them, which is odd because I skipped the SNES Mega Man games and doesn't know any of the characters or backs