While Batman: Arkham City serves as one of the finest examples of a character-driven narrative in recent gaming history, managing to take established characters in an established universe, yet pull off enough jaw-dropping, awe-inspiring and tear-jerking moments in the third act alone to justify the game’s purchase, the Harley Quinn’s Revenge DLC serves as an epilogue where…very little happens. Even though the story takes place two weeks after the game proper, we barely get to see much of the aftershock on Gotham City, or its residents, aside from the fact that Harley Quinn (and Batman) are really, really sad. Batman takes it out on everyone by being very quiet and aloof. Harley Quinn takes it out on everyone by…well, being Harley Quinn. 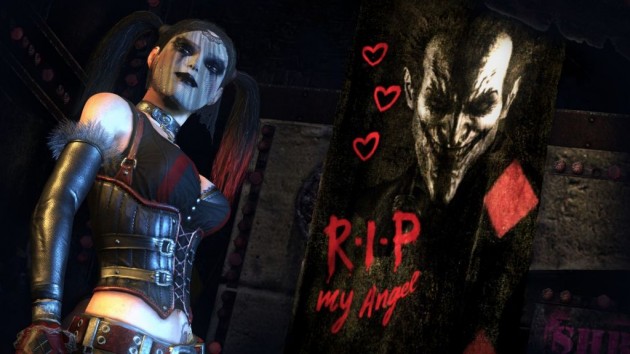 Revenge, which is accessed through the game’s main menu and can be played on its own without interrupting your story’s save game, opens with Robin arriving at the Steel Mill in Arkham City on the hunt for Batman, who has been missing for two days, ever since Harley escaped prison, kidnapped some cops, and holed herself and her thugs in Mister J’s ol’ hideout. For those of us who did not purchase his challenge pack (i.e, me), this serves as our first chance at playing as Robin, whom we control twice during the story. Although some of his gadgets are a bit different from the Bat’s, he really plays the same way as the caped crusader—a shame, considering how different it feels to play as Catwoman in her missions. There are obstacles that need to be cleared using some of the Boy Wonder’s specific toolset, but by the time you learn how to use them, Robin’s time in the limelight is over, and we’ve back to being ol’ tall, dark and brooding.

The entirety of Revenge takes place all around the Steel Mill area; nothing new has been added to the Arkham City map, and you don’t get to explore anywhere outside of the Mill area at all. The level is the same as it was in the game proper, except with a very distinct makeover to display who’s running the show now, and in what mental state she’s in. If you’re hoping to explore some new locations, you’re out of luck here. No additional Riddler Trophies, no sidequests. The only thing that subtracts from the linearity of the expansion is the thirty Harley Balloons dotted across the map. If you don’t stop to smell the roses along the way, and die very little, the expansion will take less than two hours to run its course.

And that’s the thing. This expansion is short, but, for good reason. There is nothing new added to the table in Harley Quinn’s Revenge. The fights are all as difficult as Arkham City’s endgame was (harder, if you were like me and hadn’t played much of the game since you finished it last year, thus forgetting most things), but that’s all they were. There were no new enemy types. There were no new areas to spook mooks in a Predator setting. Harley Quinn’s Revenge adds absolutely nothing to the Arkham City experience. 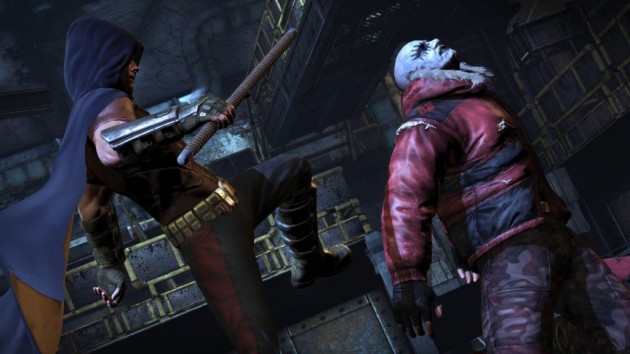 The game gives a little bit of backstory as to the state of Gotham through radio broadcasts made by Vicki Vale and the dialogue at the beginning of the mission between Robin and Oracle, but once the story is all said and done…it didn’t go anywhere. Harley was doing something bad and crazy, and Batman stopped it. We learn that the events at the climax of Arkham City did a wonder on his attitude. But, we don’t get to see all the effects. This add-on felt like a bridging story from Arkham City to the next Arkham title (Arkham State? Arkham Country? Arkham Austrailia?), but did nothing more than make Harley the big bad of the game for two hours. Granted, it was fun to see her in charge of a gang, after spending a game where it was Penguin, Joker, and Strange in control of whatever was making Batman angry at the moment, but most of the time, it didn’t feel fully realized. Why did the mooks stay with Harley? What did she do to keep herself in charge?

Harley Quinn’s Revenge stands as a disappointing epilogue to an absolutely amazing game. It manages to add nothing to the experience, from a gameplay or a story front. It’s simply more Arkham City, with a new coat of makeup on the mooks. It’s ten dollars for two hours of the same thing you did for the first fifteen hours of the game, and that’s just a really bad joke. Arkham City was too good of a game to have to settle for this as an epilogue. I’m certainly hoping whatever Rocksteady is cooking up for what I’d assume will be the third installment in this ‘verse will bring a lot more innovation and style than this, because this is just lazy. If you loved Arkham City, love Harley Quinn, or just need to hear the Bat interrogate a mook a few more times, wait around for this one to go on sale, because ten dollars for this experience is simply the worst punchline I’ve ever heard.

Leave a Reply to Will Purcell Cancel reply

Curiosity both killed and did not kill the cat.