I feel that I must repeat what I said about Super Hyper Legend of Zelda Fighter: Ocarina of Street 3D Arcade Edition.

“…a complete and utter improvement over its original release, and it should be, given that they’ve had a million years to improve it.”

And just like Ocarina of Time 3D, very little has changed in this Nintendo 64 “re-make” besides the graphics, music and gameplay. The length of time between the Nintendo 64 version and this remake has given Nintendo ample opportunity to add new content. So why haven’t they?

Well, they have. There is a newly balanced game mode which takes into account the features of the Nintendo 3DS. The multiplayer mode has been improved, too.

But what about—oh, I don’t know—a NEW LEVEL or something? An expansion of a few levels, maybe a canonical mission where James McCloud, Pigma Dengar and Peppy Hare penetrate Venom’s air defenses. Some people don’t want to pay stupid money for a game they already own unless it has something new about it. You KNOW I have a point. As I have said before, Super Mario 64 DS added an extra three playable characters, new stars and levels. Ocarina of Time 3D and Star Fox 64 3D do not do the same. This isn’t nuclear theory; if you’re remaking a game, then put your thinking cap on and include something that people are going to want. You don’t have to jeopardize “artistic expression” (oh brother) to give us a little extra.

But, like I said, the multiplayer saw improvements, so they at least gave us something new, despite how benign. But when was the last time you played Star Fox 64 for its multiplayer? Please. 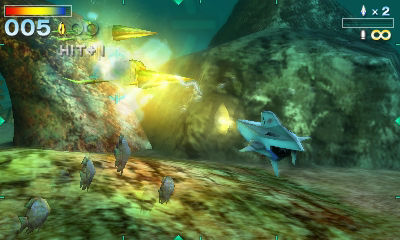 So what is Star Fox 64? It is a videogame where Star Fox, a team of intergalactic bounty hunters, are sent on a mission by General Pepper of the Cornerian Army. Their goal is to disable the warlord Andross who threatens to engulf the Lylat System in death and destruction.

The game consists of a number of on-rails shooter levels where the player pilots a ship referred to as an Arwing. These ships can withstand ridiculously high temperatures and are equipped with tools and skills ideal for aerial dogfighting. Each stage is full of enemy aircraft, and destroying as many as possible is the key to a high-score and ensuring the safety of your teammates.

You have three teammates, each of whom are practically useless and you’ll forever be assisting in battle. One idolizes your dead father, one considers himself your rival and is a jerk, and the third shouldn’t be trusted to fly an Arwing AT ALL. 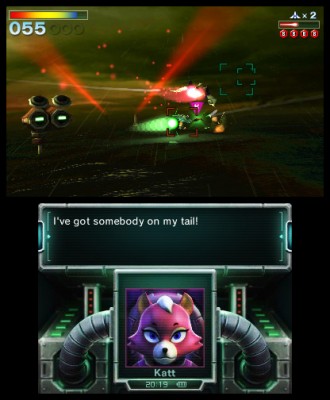 As you constantly save your blundering friends, your actions in each stage will determine your in-game route. There are three main routes, but you can drop in or out of them depending on the actions you perform. For instance, travelling through intergalactic space portals can send you careening from the asteroid belt to a neighbouring planet ravaged by war, and doing so takes you from the easy path to the intermediate one.

There are three paths: green, orange and red. Easy, intermediate and hard, respectively. The hard route is not difficult to activate; the goals required to access this path are mostly straightforward. However, to maintain travel across the hard route is extremely difficult, as the goals get increasingly more challenging to complete.

I mentioned earlier that you have to shoot down enemy aircraft. Also, you may be required to defeat a boss in each stage. Each boss is creative enough and has its own interesting weakness. A number of the bosses have a pilot who speaks to you via your radio, and they often have the best lines. 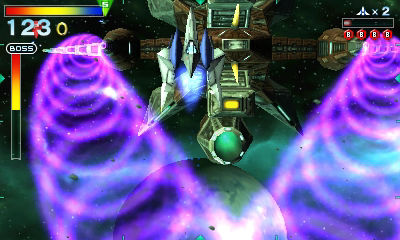 I knew we were going to get to the dialogue at some point. All of the dialogue has been re-recorded for Star Fox 64 3D. For the most part, it isn’t bad. The characters who come off the best are General Pepper, Fox McCloud, Slippy Toad, Katt Monroe and Andross. But a lot of the lines have been changed.

Well, I say “a lot,” but really only one line strikes me as the most odd. When you shoot Falco by accident (or deliberately if you’re like me) he’ll say “Hey genius, I’m on your side!”, but in the Nintendo 64 version he says “Hey Einstein, I’m on your side!” I grew up with the latter, and suffice it to say, this change really started to tick me off after a short while. Why even change it?

Is there no Einstein in the Star Fox universe? Fine. But why change it now? Surely that seems strange. Is it a secret conspiracy to make everyone into a dumb?

Also, the PAL version of Star Fox 64 was called Lylat Wars. Amongst the changes was the addition of the Lylat voice language. This is not present in Star Fox 64 3D. Ahem—why the hell not? I actually came to prefer Lylat Wars in the gibberish language because the animals made their own animal noises; it better suited them.

I found it more atmospheric, too. I guess maybe since Star Fox Adventures, the Star Fox team has spoken in a more humane tongue, so maybe the Lylat language has become non-canon. Just like Star Fox on the Super Nintendo. And the comics based off that game. What is Star Fox canon, really? A miserable pile of secrets! 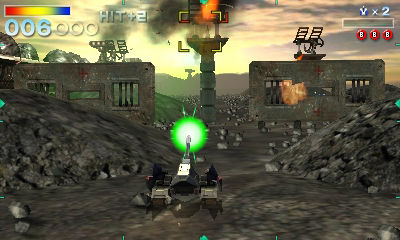 No one told me I was reviewing Call of Duty 3DS.

I think they did a good job with this game, to be honest. The graphics are really good. The planet surfaces actually look like rock or water now. If I had to pick any levels that came off worse in the 3DS port, I would say Solar and Fichina. The lava in Solar looks really bad when it rises, as it still appears to be the same blocky shape as the Nintendo 64 version. With the hyper-realistic texture on top, it doesn’t look as good as it could.

Star Fox, Lylat Wars, whatever you want to call it—it is a benchmark in its genre and, as of yet, nobody has bettered it. With every Star Fox videogame, Nintendo seems to forget what made Star Fox 64 so impressive. Let’s hope something comes of that much-rumored Star Fox and Metroid crossover, and I don’t just mean “Samox” fanfiction. Though that’s fine; its not like we can stop it from happening.