GASP! THE WII U’S SPECS HAVE BEEN REVEALED! 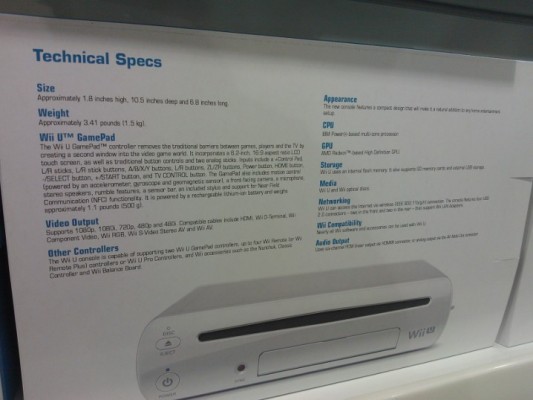 Wii U advertising material has been showing up in Australian EB Games stores. Why should it matter to the rest of the world? Don’t be such a xenophobe.

Well, because these advertising materials give us a complete list of what the Wii U can do and what it can support. I’ve gone to the lengths of writing them all down here, as they appear on this promotional document:

It takes up space in your home; I hope you’re all right with that.

Nothing really to say about this either, to be honest.

Right, let’s dig into this one.

The Wii U GamePad has a screen a third smaller than the iPad. It comes equipped with Near Field Communication, which is what was used in Skylanders to identify which Skylander is standing on the portal-thing. No mention of a back-facing camera in this material—I thought that was one of the key features—how it could look at your TV and see what’s going on.

Microphone and front-facing camera—Skype, anyone?

All the video cables that you currently own for your Wii will be supported by the Wii U. Hopefully the new console will be compatible with my HD PVR.

Other controllers:
The Wii U console is capable of supporting two Wii U GamePad controllers, up to four Wii Remotes (or Wii Remote Plus) controllers or Wii U Pro Controllers, and Wii accessories such as the Nunchuk, Classic Controller and Wii Balance Board.

According to this material, two GamePad controllers can be used at once. Recently, Nintendo went back on their word, and claimed that they would only support one (until a later date). This has something to do with only being able to go up to 720p when a GamePad is in use, and not the full 1080p. It looks like the Wii U will support all of the Wii’s peripherals (well, at least the official ones).

Appearance:
The new console features a compact design that will make it a natural addition to any home entertainment setup.

Is that a claim you can really make? What if it looks like shit in my home? Will you buy me a new home?

This could probably rival Xbox 360 and go toe-to-toe with most games on the system. However, it’ll never be able to keep up with the next generation of consoles.

It supports external USB storage? Excellent! No word yet on the capacity of the flash storage; it’s probably only 512MB again, because Nintendo works on the cheap and will re-use Wii parts wherever they can.

No promise of DVD playback.

Networking:
Wii U can access the Internet via wireless connection.  The console features four USB 2.0 connectors – two in the front and two in the rear – that support Wii LAN adaptors.

No Ethernet port on the back. If you want a wired connection, buy a LAN adapter. Give Nintendo more money for something that should have already been included.

Wii Compatibility:
Nearly all Wii software and accessories can be used with Wii U.

“Nearly all…” sounds like they’re covering themselves. I think we can safely assume that anything made with Nintendo’s consent is going to work just fine.

Audio Output:
(can’t make any of this one out, seems generic though)

Well, this is all according to the documents photographed by Maximum Geek. I have no reason to doubt their authenticity, but I am bothered that Nintendo Land is on the shelves. I thought it was supposed to be a pack-in title.