I’m grumpy, you know why? I’ve been working on this review since the start of September. I take a break, and when I come back to it, the Game Grumps have played Snowboard Kids 2. Now everybody on the Internet knows about the Snowboard Kids franchise. Looks like it’s not so “outside the mainstream” anymore.

What’s Wrong With Their Noses

Chances are you’ve heard of Snowboard Kids (especially if you’re a GameCola Faithful). It is a game released for the Nintendo 64 back when there were few games around, so it’s likely you’ve played or seen it at some point. Did you know that Snowboard Kids has a direct sequel and a complete reboot? Snowboard Kids 2 and SBK: Snowboard Kids, respectively. But there is another game in this franchise, a port of Snowboard Kids to the Sony PlayStation with added features. This port is called Snobow Kids Plus.

I listed this as my favorite sports game in the very first edition of “Q&AmeCola,” and it still is despite its glaring problems. For the most part this game is a faithful recreation. All of the textures and character models appear to be newly made but mirror the originals, and some of the music has been re-arranged to sound worse. All of the music in Snobow Kids Plus is prerecorded, likely because that takes pressure off the PlayStation SPU (Sound Processing Unit). If you’re using prerecorded music, it doesn’t have to sound like you stuffed a MIDI file through a VST plugin.

There are a few other key differences in Snobow Kids Plus, which I’ll go into shortly. Firstly, though, I’d just like to tell you up front that I’m glad this port never made it outside of Japan. It may be very close to the original Snowboard Kids in terms of content, but the new tweaks are actually a bit of a problem. We’ll go over those after we’ve gone over what Snowboard Kids is. I’m not going to review a port of a game and just talk about what’s new, am I? 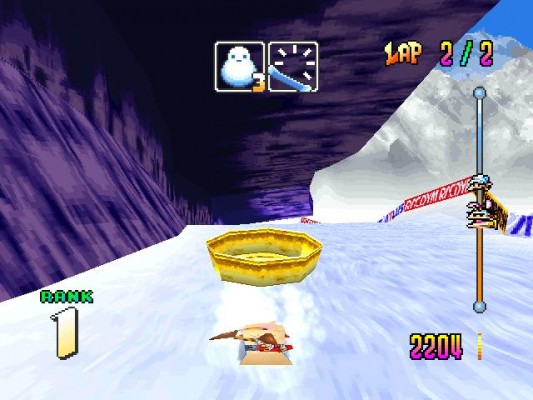 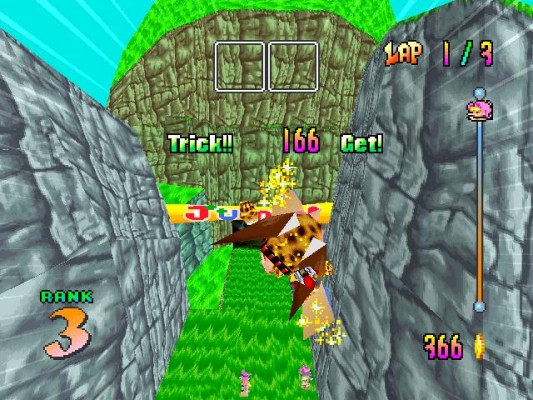 Why Have They Got Big Noses

The goal in Snowboard Kids is to take control of one of many distinctly different characters, and achieve the best prize you can in a handful of races. What makes the game as memorable as it is? The music and the course design, mostly. Although the game takes place on snowboards, the environments aren’t always snow-laden. There is a course where you go boarding through the countryside, and there’s another where you go sliding down the streets of a small ninja-themed village.

Each race consists of a predetermined number of laps. During a race, you and the other three combatants can earn money by collecting coins or performing tricks. Using this money, the racers can obtain weapons and items. You can hold one weapon and one item at a time. Some of the weapons and items are not very useful—there are weapons that allow you to “accidentally” get caught in the blast radius, and others that barely cause your opponent to flinch at all. 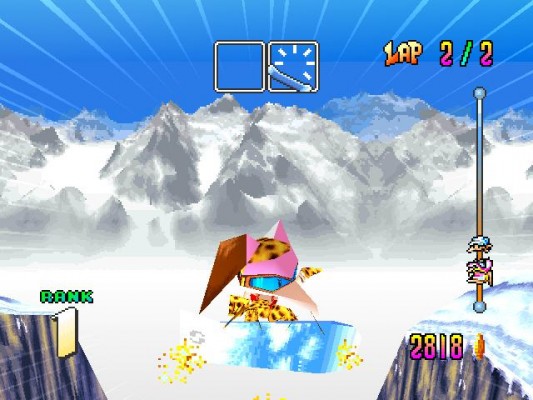 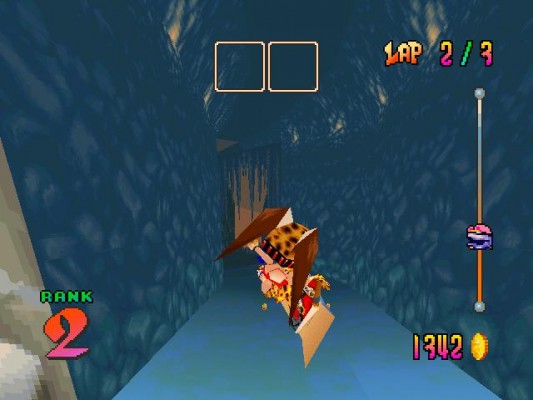 As for items, there are the usual suspects. There is the generic speed-up, the temporary invincibility and the little rock for people to trip over. The most powerful items are Pans. When activating Pans, all of the racers in the course are immediately struck over the head by giant-sized pans, and then squashed into the ground. Pans have lifted a 1st place victory from me in mere seconds; it isn’t funny how one-sided that item is.

There’s only so good you can get at Snowboard Kids until your victory is no longer dictated by how much the computer cheats. Even then, the computer will constantly bombard you with Ghosts if you’re in 1st place, an item that halves your maximum speed, making it impossible for you to secure a decent lead. During the run to grab screenshots for this article, I was hit with TWO ghosts at once. Soon after, I took advantage of a secret shortcut and went back to 1st place to polish off with a gold trophy.

The AI in Snowboard Kids is more dishonest than the AI in Mario Party.

The multiplayer is where Snowboard Kids is best. With four players and some snacks, that’s an evening well spent. Well, that’s only if you’ve got four controllers, three friends and enough money for snacks in the first place. But you can only have two players in the PlayStation port, even if you own a Multitap. 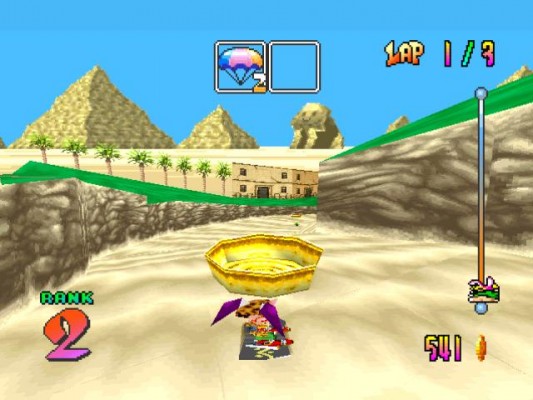 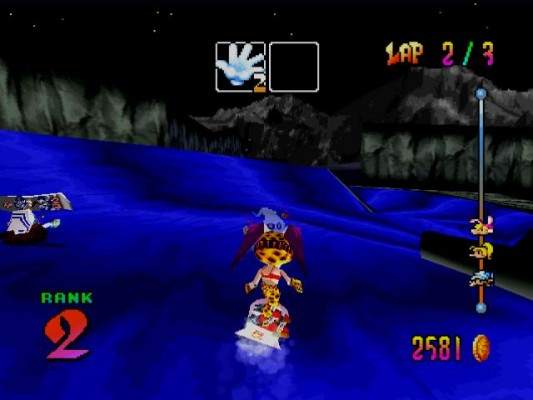 Why So Large? Who Nose.

Ah yes, the features added to the PlayStation port are hit-or-miss. Firstly, the game has a few cutscenes formed entirely from still images and voice-over dialogue. In Japanese. Another feature that gets in the way is the new “Auto Pilot” function, automatically enabled by default. This leaves the computer in charge of steering you to the ski-lift. “Computer in control” usually means “computer has advantage” in racing games, so I’m not a big fan of the feature.

However, every time I’ve turned Auto Pilot off, I’ve made an absolute meal of trying to get in the ski lift. There’s something else on the pause screen that I can disable, but it’s in Japanese, so I don’t know what it is either. Could be “expert mode.”

Snobow Kids Plus also has character customization options, including outfits and hair colors. As always, these cost virtual money, so you should probably just save up for the better snowboards and deck your character out with cooler clothes much later.

I’ve never managed to fool someone into playing multiplayer with me, so we’ll never know if you can battle as your own customized characters. I’ll assume you can, because the Japanese are like wizards when it comes to these things.

There are new characters but they’re not really anything special. They’re just there to give you more choice—if you wanted to play as someone with all-around stats but didn’t want to be Jam Kuhemund, you now have extra variety. The art style used for the illustrations has also been changed to make the characters look slightly more grown up, which I approve of. They still have big noses, though.

What I’m trying to say is—an eye for an eye, a life for a life…I think. Snobow Kids Plus is worth playing if you’re an avid fan, else just ignore it and stick with the original and best—Snowboard Kids for the Nintendo 64. A good port, but the original outshines this in almost every fathomable way.

I reckon Snowboard Kids should be re-released for the PlayStation Network and Xbox Live Arcade. I presume you read our articles from time to time, Atlus. You’re in your office at work, you’ve see what I’ve just said, so make the call. Go to your boss and tell them GameCola has a great idea concerning Snowboard Kids. Let’s make magic happen. 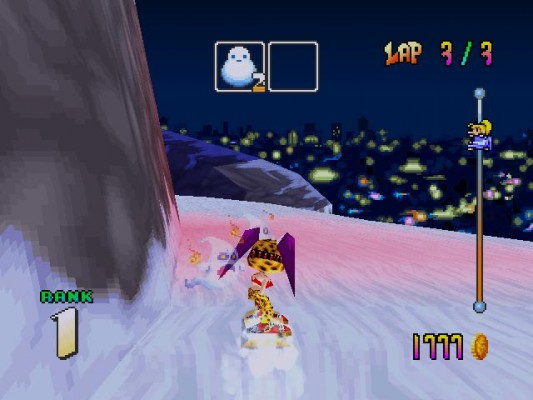 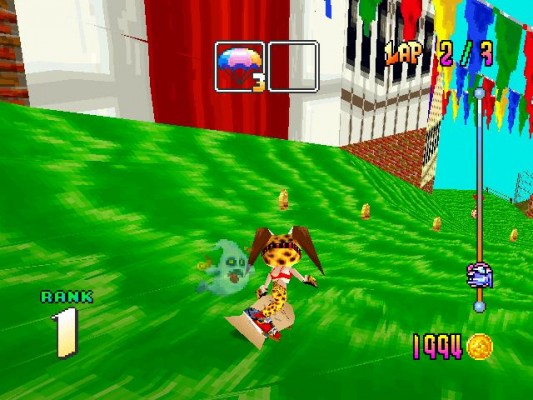 t's Day Four of GameCola's continuing coverage of the Game Developers Conference 2010! So far, the conference has been dominated by Microsoft and Sony, and people have been wondering if Nintendo has a ...