A “Top of the Heap” Special Report

When it comes to sex, there are two types of people. The first group is those who demand that their coitus be special. They light the fireplace, put on some soft music—set the mood. Their night may include rose petals, sensual massage oils, and the re-enactment of various pages of the Kama Sutra.

The other group will fuck an inert pile of modeling clay if part of it is vaguely shaped like a tit. The following Atari 2600 games cater to the latter group of people.

The games this month will be teamed up with others that are so remarkably similar that one would go as far as to say—gasp—“it’s the same damn game!” One would be exactly right. Adult videogame company PlayAround thought it would be a good idea to make a pornographic videogame that targeted a male audience and, to broaden their user base, offer up something for the ladies by slightly tweaking the original game. I trust I don’t have to tell you what a dismal failure this marketing strategy was.

In the interest of brevity, I am grouping these identical games together, spending the majority of each review focusing on the game that was made for men, and dedicating a small blurb at the bottom of each review to letting you know what the women’s version is like. I’m doing this for a few reasons:

a) This column is already painfully long.
b) The games are practically the same.
c) Women don’t matter. 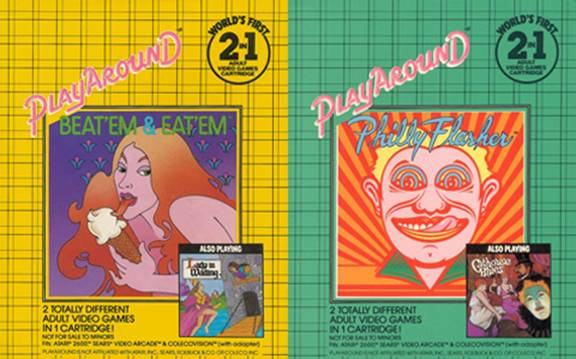 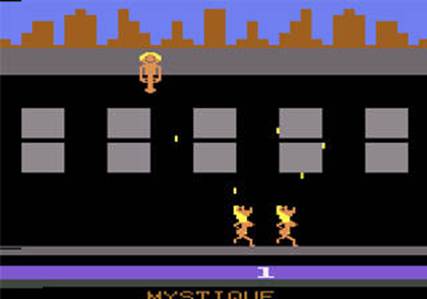 Though George Michael Simulator Beat ‘Em and Eat ‘Em scores right below Exit to Eden in the eroticism department, the game really isn’t as bad as it’s been made out to be. It’s difficult and very simplistic, but that describes the majority of the Atari’s entire library.

Its visuals are actually more impressive than those of Kaboom. While Kaboom takes place on a simple olive green and grey screen, Beat ‘Em has a clear city skyline in the background, a building, and naked boobies.

Philly Flasher is exactly the same as Beat ‘Em and Eat ‘Em except you control two very “excited” men who are standing below a witch that is spewing—hell, I don’t know. Breast milk? Vaginal secretions? Taint sweat? Who can say, but the guys waiting below are just pleased as punch to guzzle it down. A bit too pleased. 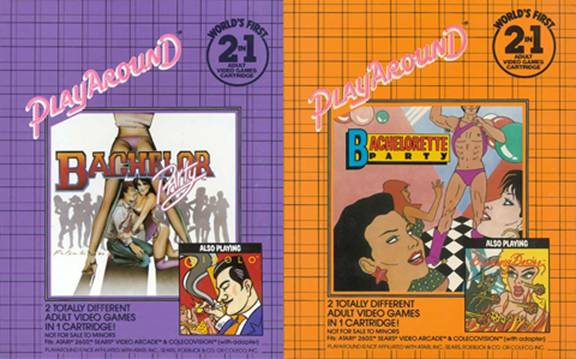 Bachelor Party is a ripoff of the classic Breakout, and, unlike Beat ‘Em and Eat ‘Em, it is not an improvement on the original.

You play horizontally instead of vertically and bounce a man with a raging hard-on against silhouettes of naked women. The bumper you control is probably supposed to be a penis, but it’s really stretching even by Atari’s graphical standards.

Music in the game is much the same as all of these Mystique/PlayAround games—a quick spattering of a heavily computerized public domain ditty (“Auld Lang Syne,” in this case), and then it’s nothing but basic Atari sound effects.

There’s an alternate version for the ladies called Bachelorette Party in which you bounce a silhouette of a naked woman against guys with raging hard-ons. Yeah, they didn’t try very hard on that one. 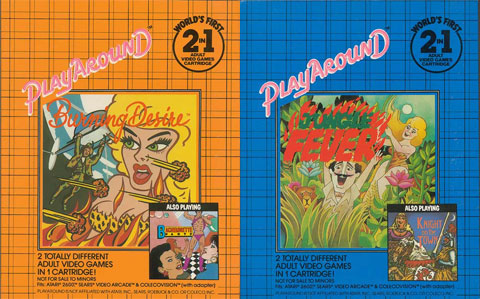 A naked woman is about to be roasted alive by cannibals! Who can possibly save her?

No! It’s a purple man hanging from a helicopter with a massive four-pixel erection!

Just like in the romance novels, you have to swoop down—tethered nude to a helicopter—and put out the flames that threaten your woman with your urine/semen/Chlamydia discharge, and, once you’re finished rescuing her, your reward is to watch two vaguely human-shaped blobs of pixels perform Bill and Ted’s favorite number upon each other.

In this game, you play as a naked woman with huge purple nipples strapped to a helicopter and put the fire out with—again, I don’t know. Breast milk? Drool?

Jungle Fever’s title may have written a racism check that the game just couldn’t cash, but it’s more than made up for with Custer’s Revenge, which, at the risk of overextending a metaphor, bought the entire fucking bank.

In fact, speaking as an aficionado of the offensive, Custer’s Revenge could very possibly be the most offensive game ever made. The gameplay may not be anything special, but the plot is a deliciously vile blend of hardcore xenophobia, revisionist history, and rape.

Here’s how it works:

You’re General Custer, and you’re looking for revenge on the Native Americans who killed you. So, by that logic, yes, Custer is a zombie in this game—a zombie with a boner. Anyway, Custer’s brand of revenge isn’t a Charles Bronson kill-anybody-who-looks-at-you-funny kind of revenge. Not in the slightest. The titular revenge is exacted by tying an Indian woman to a post and dodging a hail of arrows so that you may mercilessly rape her. You get one point for every successful thrust.

Now, brace yourself for some amazing news. Apparently, some people found the premise of raping an Indian woman to be offensive. It’s amazing what people will complain about, I know. After receiving a considerable amount of bad press over this game, the developer, Mystique, sold the rights to it to another pornographic videogame company named PlayAround. PlayAround did what they could to decrease the game’s blatantly offensive subject matter by darkening the woman’s skin (how raping a black woman is any less offensive than raping an Indian woman is beyond me), making her feebly motion to you as if she’s looking forward to Custer’s advances, and changing the name to Westward Ho.

In General Retreat, the game is the same except now you’re the woman dodging cannonballs and Custer is against the pole.

Knight on the Town / Lady in Wading 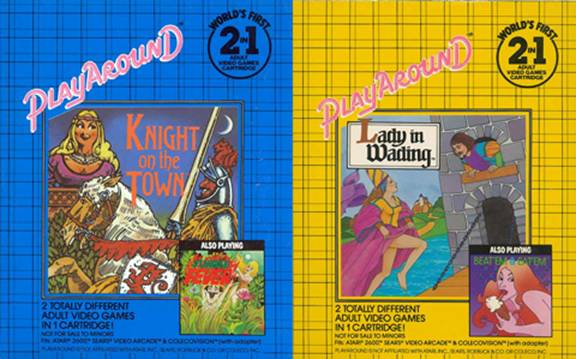 I don’t want to brag, but I know my way around the ladies. I may not wear eyeliner, goggles, or angora top hats like some of those Don Juans you may see on the TV, but I still know to rake ‘em in and how to make ’em a wriggle like putty in my hand. Some people say it’s flowers. Nope. Some say it’s jewelry. No way. I learned the real secret from this game, Knight on the Town. It turns out that nothing gets the old juices flowing like building a lady a bridge. They just lose their mind.

Lay your bridge without being eaten by a crocodile, falling into the water, or getting your genitals munched by a gremlin, and you’ll be handsomely rewarded by a fair maiden. Though by “fair maiden” I mean “glob of pixels,” and by “handsomely rewarded” I mean you’ll both kind of bump what appears to be your pelvic regions against each other about four times in total.

Second verse, same as the first. Lay a bridge, avoid crotch gremlins, do the pelvis dance. 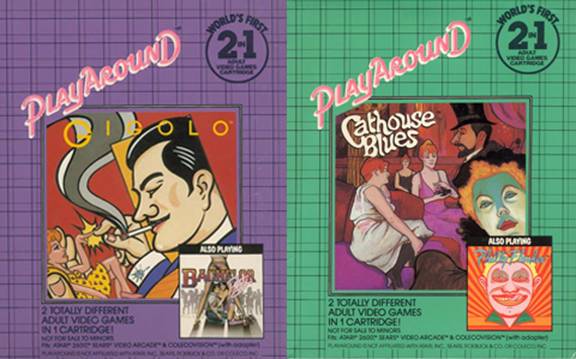 This is where things get a little confusing. In Gigolo, you play as a girl who goes from door-to-door having sex with people and avoiding the police.

In Cathouse Blues, you play as a man going door-to-door having sex with people and avoiding the police.

Which one of these is for the ladies and which is for the men is beyond me, so you can all just decide for yourselves which one turns you on more. Hopefully your answer is “I’ve been more turned on by The Soggies in the old Cap’n Crunch commercials.”

The game itself is hard to follow and just not very fun.

And so ends this awkward, vaguely sexual, largely juvenile heap.

Yes. Beat ‘Em and Eat ‘Em just won a “Top of the Heap” trophy. Yes. An Atari 2600 game where a man beats off on the top floor of a building and two women wait below to catch the man chowder in their mouths was just named by me to be the best game I’ve played out of 13 frigging games this month.

Oh dear god, what am I doing with my life? What have I become?