It’s really hard to hate on a game like Lunacy. They really tried, you know? It’s laughable today because it’s super old-school CGI, but back in the day this thing must have looked incredible. Anyway, I’ve decided, with the blessing of The Beard, Mr. Franzen himself (who chose this game for me to review out of several choices, I might add) to return to my own old-school ways and do a diary type review of this thing. So without further ado…

OK, here goes. It took me about twenty minutes to find all the cords and then hook up my goddamn Sega Saturn to the giant TV in the living room AGAIN for all of you. I hope you all appreciate my tireless, unselfish, unpaid work. Here’s a picture of the game on the giant screen, as well as the game box just so you know I actually play these abominations and don’t just Google info about them and bullshit you. 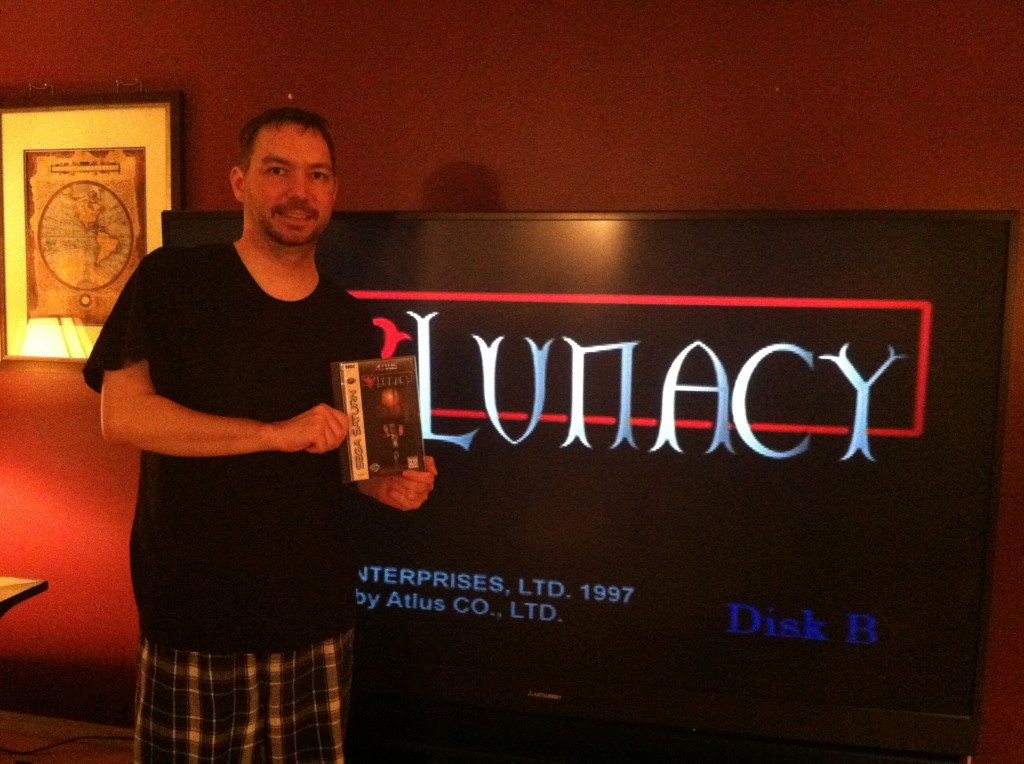 To prove to you all that I actually own and play these games. 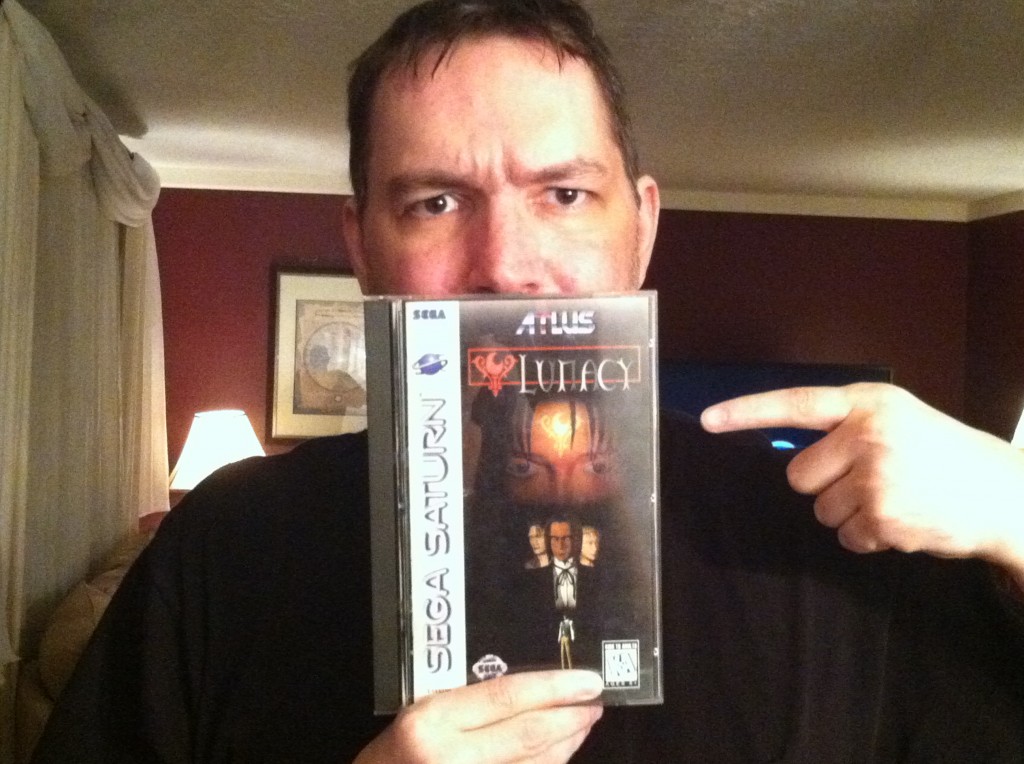 I’m pointing angrily. Because it took so fucking long to set all of this shit up!

Wait, what?! The opening cinema is so confusing my brain just churned into a giant ball of fluffy cotton candy, rendering me utterly useless. What the fuck? Something about a rose and some random cutscenes and a ton of horribly rendered characters moving like marionettes…

Huh. I am dumbfounded. This game comes on two discs with a fold-out map, but the map is so simple I have no choice but to go to the Internet to download myself a more detailed map and (hopefully) a goddamn walkthrough. I shall return.

OK then—my wireless printer was fucking up, and it took some doing, but I finally have my FAQ and map and I’m seriously ready to go!

Some quick history here: I’ve owned this game for over thirteen years and never played more than a few minutes of it, which is odd because I love these types of games. It’s an adventure game using computer-generated graphics rather then live actors, very similar to D (or D’s Diner as it’s known in Japan and holy hell that’s a much cooler name than D). It’s one of those games where it’s a first-person view, and you push the d-pad left or right, and the field of vision moves a certain degree, and when it stops you push UP and your character moves in that direction.

So I begin by asking every question, ever: “Where is my mind? Why am I here? What’s going on? What is my name?” It’s a seemingly endless voice-over that thankfully concludes with me in jail, having a conversation with a bald, open-shirted super gay guy named Anthony. And man, does the voice synching suck! This is the worst martial arts movie you’ve ever seen dubbed. Wow—it is horrible. They put absolutely zero effort into localizing this.

I am apparently in the City of Mists, and I need to find the City of Moons. I have amnesia, which is a complete shocker of a plot twist. I have a ridiculous tattoo of a crescent moon on my forehead, and why the hell is Anthony in jail, anyway? His terrifying, flapping, non-matching lips are so hypnotizing…

But I digress! After bashing into the cell door five times, Anthony gives me the key, which the fucker apparently had the whole time. Oh, you teasing bastard! I escape the jail cell (which has a supremely odd, hobbit-sized door. Fred actually has to duck down to get out because it’s only about three feet high). I’m free to explore the town. 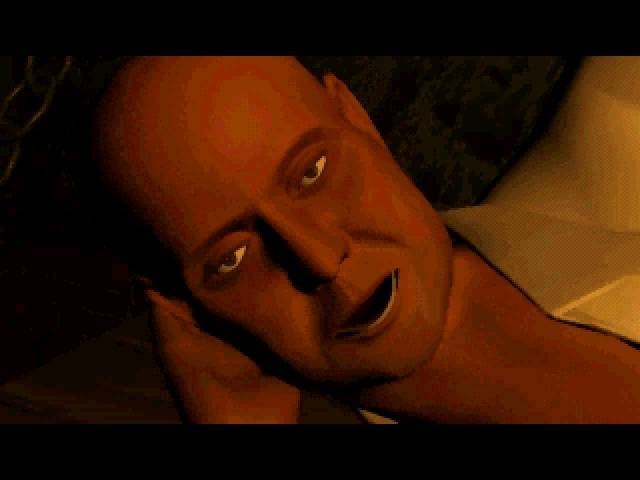 This is Anthony. This is the first face you wake up to in jail. Tell me he doesn’t want your ass.

I have a fucking map and a fucking FAQ and I cannot figure out how to find the VERY FIRST THING I need to get to, which is the forest. I have traversed this town from end to end, I have followed the FAQ religiously, I have turned right, then gone forward and turned right again. I have literally spent almost forty minutes on the opening alone. I have found the graveyard, the tavern, the doctor’s office, the flower shop, but where is the motherfucking forest!

So, no joke here—my girlfriend’s son (we’ll call him Dash, because I think that’s a cool name) has been sitting with me watching me emotionally unravel on the very first part. He finally said, “Can I try?” and I said, “Sure Dash, knock yourself out. As a matter of fact, if you can find the GODDAMN FOREST I’ll give you a dollar.” Then I went into the bedroom to complain to my girlfriend Fatima about why I can’t possibly finish the game and, consequently, the review, because despite the map and FAQ it’s simply too hard to navigate, Dash calls out (I swear this is true) “I found it!”

It’s been five minutes. I walk out, and sure as hell, he has actually found it. I quietly pay him his blood money, and hunker down for the rest of the game.

I start exploring the town proper, and eventually end up in Lord Gordon’s palace. He seems to run this town, which has about a dozen people in it. It’s here that I meet the most hilariously interesting character in the whole game, Jade. I love Jade; he is such a complete asshole, but he’s also such an immature complete asshole. After meeting with Lord Gordon and exchanging completely nonsensical dialog, Jade throws me out of the palace with these parting words:

and then jump forward to 2:11 in and watch the hilarity. Jesus, I’m still chuckling… I love Jade; he’s just such a dick. 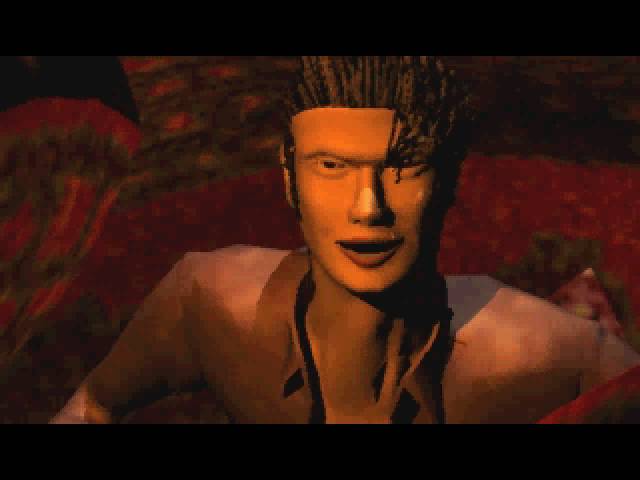 This is Jade. He calls me “stupid” every chance he gets. I can’t help but love this asshole.

OK, so by using my FAQ I’ve covered about half to 3/4 of this game. Here are some highlights:

I’ve met Gray, who has insanely tiny hands and creepily collects dead butterflies pinned onto boards (which is eerily like Mansion of Hidden Souls on the Saturn). When I meet him, he spouts off gibberish about Lord Gordon taking his daughter for a child bride and then abruptly says, “You look tired. Stay here tonight.” before leaving the room. Bam! Gone. People in this game love to tell you things and then immediately leave the room to let you contemplate what they said.

I meet a ghost who calls out, “Freeeedddddd!” and I reply, “What?! Someone in this town knows my name?” despite the fact that every single person I meet says, “You must be Fred! I’ve heard about you…”

I end up at the windmill and Jade is there. He says, “The key is in my house. Good luck!” as super sarcastically as any person on Earth has ever said anything.

Lord Gordon’s main helper is a chick named Zaboo. Her name is Zaboo. And she has a tattoo exactly like mine, meaning maybe she’s been to the City of Moons too. Zaboo has…a tattoo.

The clockmaker in the town is named Mac, and he calls me “No Respect” because I don’t respect time. I think I might love this game.

The whole first disc of this game is a treasure hunt. You have to find the tree sap, the matches, the paint, the broken ladder, the flowers and so on to eventually descend the well in the town and get to the City of Moons. Once you’ve got it all (which you could do in probably 20 minutes if you knew your way around), you’re on to Disc 2…

City of Moons is really just a bunch of towers linked by walkways suspended high in the sky. Each section is categorized by elements: earth, water, wind and fire. You basically have to release a butterfly (read: soul) in each tower to complete the game. Without my precious walkthrough I would be totally lost, I must admit. But I fly through the last of the game and it’s completely incomprehensible ending and sit back, satisfied. Dash has sat through the entire thing with me, loyal to the end. He is as confused as I am.

So, did I like Lunacy (or Torico, as it’s called outside the States)? Well, kind of. I absolutely loved Jade. There’s a point where he says, “Hi ya, stupid! You’re looking chesty!” Please go here at 5:12 exactly to watch this hilarious section, and feel free to watch more complete bonkers madness.

What the fuck does that even mean?! I don’t know, but it’s the best line ever.

In the City of Moons I was eaten by a carpet. I sacrificed myself at the end to save my true love. I faced a witch and a ghost. I put a man’s slain daughter to rest.

I realized that this batshit crazy game was made by people who seemed to love it to death. I didn’t come away four hours later hating this game at all. It was silly, and the lip-syncing was horrendous, but it was a game made in transition. It was a weird time in the videogame universe. We were getting used to CDs as a medium, and people were experimenting. They put some effort into this game. It sucks by today’s standard, but it doesn’t suck the way the FMV games suck, like Sewer Shark or Night Trap. For whatever reason, computer-generated adventure games have aged so much better. They’re still laughable but…man, there’s some heart there, you know? I love D so, so much. D2 on the Dreamcast even more so. So how can I hate this terrible game?

There’s love here. And I love the love. The game is not a 10, and it’s not a 1. It’s not even a 5. I’m going to base my review on its place in history, a point in time when the CG adventure was the next thing, the next holy shit! The next wow! How did you do that?! For just four short hours, Dash and I had so much fun playing this shitty game (and keep in mind, he’s of the Wii generation) that I have to give it a…

In putting off writing this month's "Dear Readers" column, I came across some fanfiction about Pong. I'd like to share this story with you all. It's short, so I'll just paste it right here. Click h