This classic GameCola article was originally published in March 2006.

If you’re reading this, I’m just a scientist. I’m no goddamn superhero or bulked-up super-soldier. I was just flying over Jurassic Park, looking to do some research after the horrible events of that mediocre movie and its two shitty sequels. Then, my helicopter crashed. I’ll have to go into the mansion outside Raccoon Ci–wait, hold up. Wrong helicopter crash, wrong game. 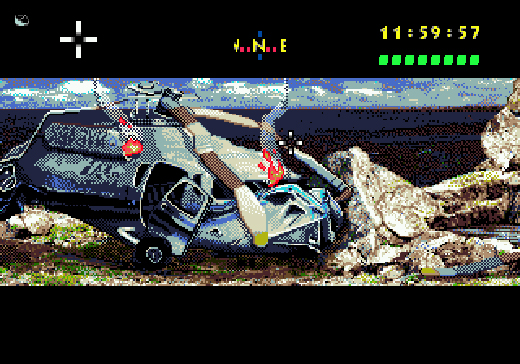 Anyway, I’m going to finish my mission. No, this isn’t a side-scrolling shoot-’em-up mission like on the Genesis and SNES. This piece of shit game was built from the ground up to utilize the completely useless full-motion video capabilities of the Sega CD. Therefore, it’s a fucking MYST clone. Point-and-click. How will I survive this hell? I’m just going to write it all down and hope someone, somewhere in the future will find this and pray to the gods above—PRAY!—that the dickheads who ran Sega of America during the Sega CD’s time and chose not to import awesome games from Japan but sink all their money into full-motion video shit (digital pictures?!) got their just due.

Not sure about the date. I was out for awhile. My entire crew is dead. Somebody shot down our chopper. InGen? Maybe. I just got back. Here’s what happened: I moved my cursor around and noticed that as it went over the helicopter door, it turned into a giant “hand.” I collected my items from the ‘copter and thought back to what I’d seen flying in. The island was in ruins and had no discernible human life. OK, so I’d crashed between Jurassic Park and The Lost World, then. God, I hated the Lost World.

Anyway, as I looked to my right, the screen scrolled and a cave was revealed. My cursor turned into an arrow. I hit the “A” button and—holy shit! The screen changed into a full-motion video from the camera’s point of view, as it hurtled down the road at approximately 2,000 miles per hour. And suddenly, I was at the Visitor’s Center. You remember the one, with the giant tyrannosaurus skeleton and the banner that says “WHEN DINOSAURS RULED THE EARTH.” Everything looked so grainy. Must be the Sega CD’s limited 64-color palette. 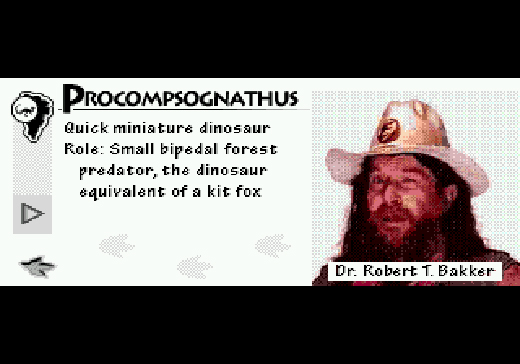 Anyway, I went up the stairs to what looked like some computer room. I clicked on the monitor and a live feed went up. A lady was there.

“Help!” I screamed. “My helicopter crashed and I’m stuck on this crappy island in this horrible game!”

“Your helicopter has crashed,” she responded.

“I just said that, you bitch! Send in the fucking army or something!”

“We’re going to need you to finish the job you started. We’ll need one egg from each species of dinosaur on Jurassic Park,” she said.

“What? By myself? Fuck that! You come down here and get your own damn eggs! Didn’t you see those movies? Everybody dies!”

“Good luck, professor. I’ll be in touch.” The screen faded to black.

It’s like she hadn’t heard a single word I said. In anger, I went into my inventory and selected the rock I had picked up earlier and used it on the computer, not really expecting anything to happen. All of the sudden, I’m running from the center as warning bells scream and sirens wail. The entire Visitor’s Center comes crashing down, and I’m crushed to death. Game over. That’s poor building design right there, if one rock can bring the whole goddamn thing crashing down.

Thank god I brought an FAQ with me. I’d never get through this piece of garbage otherwise. I was aimlessly wandering earlier when I ran into the sprites of a poorly animated little red dinosaur. Consulting my guide, it told me to equip my stunner (essentially a stun-gun cattle-prod kinda thing that looks like it shoots Cocoa Puffs). Feeling sorry for the dinosaur’s lack of frames, I shot it square in the ass. The thing jumped straight up in the air and then booked it away from me. Feeling triumphant, I followed. 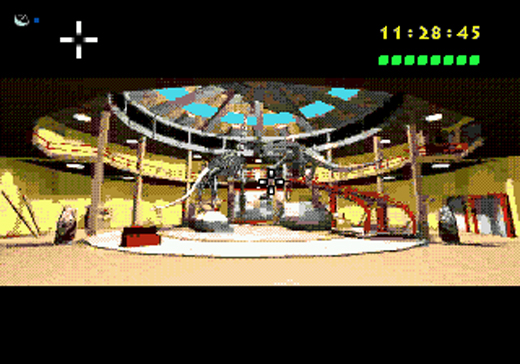 The screen changed as I plowed forward, and when my vision focused again I was facing new dinosaurs. You remember: the ones that killed the fat guy from Seinfeld in the first movie.

I shot it with my Cocoa Puff gun, and it whipped out a bowl of milk and a spoon and made a delicious breakfast out of my bullets. It ate a complete and balanced breakfast and then laughed at me. Then it spat acid, killing me instantly.

I decided to try a new tactic. See, all around Jurassic Park were these little video monitors with silhouettes of dinosaurs on them. Earlier today, I decided to click on one. Instantly, a fat, bearded Harry Knowles-looking guy popped up.

“Help!” I screamed. “I’m stuck on this island and that bitch Emily Shamara won’t help me!”

“The velociraptor is a vicious dinosaur! It can shred meat in–”

“Fuck, don’t tell me how scary the dinosaurs are! I already know that!” But as he rambled on, I saw that there would be no help there. I didn’t know whether to be more afraid of the dinosaurs on this island or this fat, pompous, dino fact-spewing condescending asshole. I’ll tell you this: I was mightily bothered by the fact that nobody seemed to give a rat shit that I was stuck on this island. For people who wanted me to collect all their precious eggs, it seemed like a bit of a tactical error on their part.

Lots of things have happened in the last few days. I found a working tram. I got my ass kicked by thirteen different species of dinosaur. I died 634 times because my Cocoa Puff gun is a piece of shit. I distracted a tyrannosaurus in her nest with a bear horn and stole her babies. I made endless trips back to the Visitor’s Center to deposit my eggs into incubators and try to end the misery of this game.

It’s cold and lonely here in Jurassic Park. While I wait for a rescue that will never come, I think of things. Like how cool Jurassic Park was in 1993, and how badly it sucks now. How I can’t believe people spent $300 on the Sega CD (coincidentally enough, right around 1993), and how pissed they must have been a few months later, when all they had to chose from was garbage like this and Corpse Killer. How nobody has been able to make a good Jurassic Park game, even with such an awesome and solid premise already in place. How I seem to have an ass-load of crappy point-and-click games in my Sega CD library, and how I don’t remember buying them.

I can hear the distant honks and roars of several different dinosaurs. It does not make for a pleasant and sound sleep at night.

My deadline is up tomorrow; I have to have this journal completed. I swear I’m getting off this island, somehow. And when I do, I’m going to find that fat paleontologist Robert Bakker and that stupid whore Emily Shamara and stick their asses in the T-rex nest covered in a tasty marinade.

Wait, what’s that noise? As I’m writing this there’s some kind of disturbance in the bushes across from me. Maybe it’s a kitty, or a better game. I’m going to investigate. I’ll just be a–AIIIEEEEEEEEEEEEE !!

The only people this is not recommended to are those who just do not have the time to get involved with a time-consuming game.