Sega made a deal with THQ, although it might as well’ve been with the Devil. This particular deal allowed THQ to develop and publish a series of games using Sega’s licenses on the Game Boy Advance. Each of them is a sin against the very framework of nature itself, but one stands out as the undeniable worst.

Crazy Taxi: “Catch” a Ride has certainly “caught” something. That something is a series of crippling bugs, if you know what I mean. The project was handed out to Graphic State Games, who would have been the very last people I’d trust at all.

What is immediately apparent, through the implementation of the game itself, is that the Game Boy Advance quite clearly isn’t powerful enough to cope with a game world the size of Crazy Taxi‘s. If it copped out and used Mode 7 graphics instead of complete 3D, there wouldn’t be a problem.

When the core game itself chugs along at a fourth the usual speed, there is very little that the game can do on top to make anything better. Which is actually a shame, because had the game ran at a more suitable speed then I would have been able to praise the scope of the project and the attention to detail with sound, graphics and controls.

This is a shocker: the controls are almost perfectly reconstructed. Even the techniques are properly integrated into the game. The core mechanics are very close to the original game‘s. I wouldn’t call them flawlessly copied, but I can say that Graphic State had upped their game this time around. 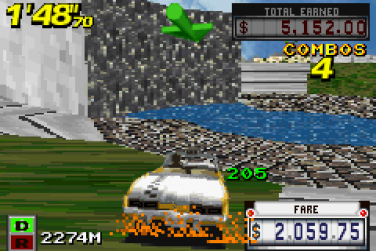 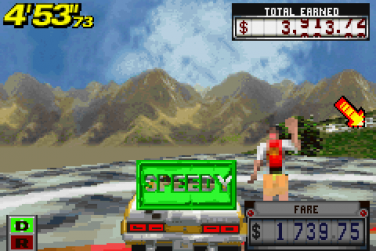 Unfortunately, when the game crawls at three miles per hour, it isn’t easy to appreciate the attention to detail.

The Game Boy Advance was never supposed to be pushed so hard. Although the back of the box claims the system to be a 32-bit handheld, the truth of the matter is that the processor isn’t really up to much at all. While 2D games cruise along sweetly with little to no problems, any instance of textured 3D is going to lag no matter how you go about presenting it on the system.

During gameplay, many vehicles appear on screen. The city is fully textured, and there are even pedestrians dotted around. There is a lot of detail, but it comes at the cost of a sluggish frame rate no better than trying to stream a low-quality Internet video on dial-up.

Music isn’t Graphic State’s strongest skill, but the soundtrack plugs a hole. The crackling discount speakers of the Game Boy Advance are quite suited to the distressing squealing of a synthesizer pretending to be a guitar. Presentation is gritty, but given the nature of the hardware, it’s an achievement nonetheless. 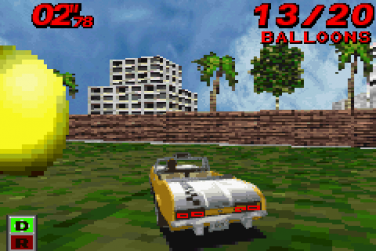 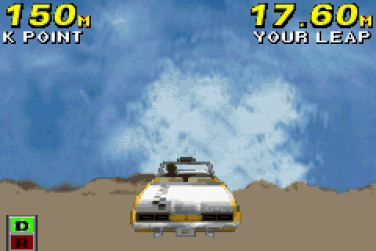 You “Drive” Me Crazy

This ambitious game has two whole cities from the original Crazy Taxi, which are very accurate when placed aside their arcade counterparts. All of the driving techniques are present, and even the Crazy Box mode containing nine minigames is available to play.

The only “crazy” thing here, however, is that someone actually thought that Crazy Taxi could work on a limited platform such as the Game Boy Advance. This game wrangles the absolute most it can out of the processor, but it ultimately falls short because of the one glaring issue.

The Game Boy Advance just isn’t powerful enough. That said, the game itself is playable, has a lot to offer considering the platform, and really stretches the system to its limits. I can’t give the game a low score based on just one major problem, right? 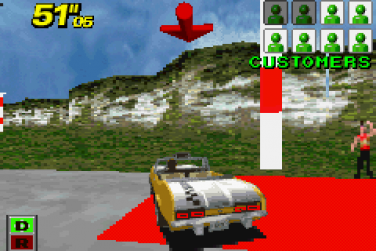 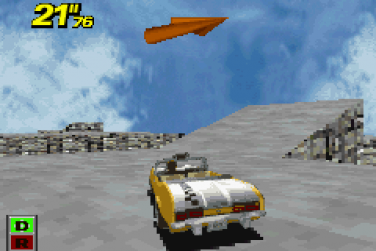