Here is one of the first scenes in Layton Brothers: Mystery Room. 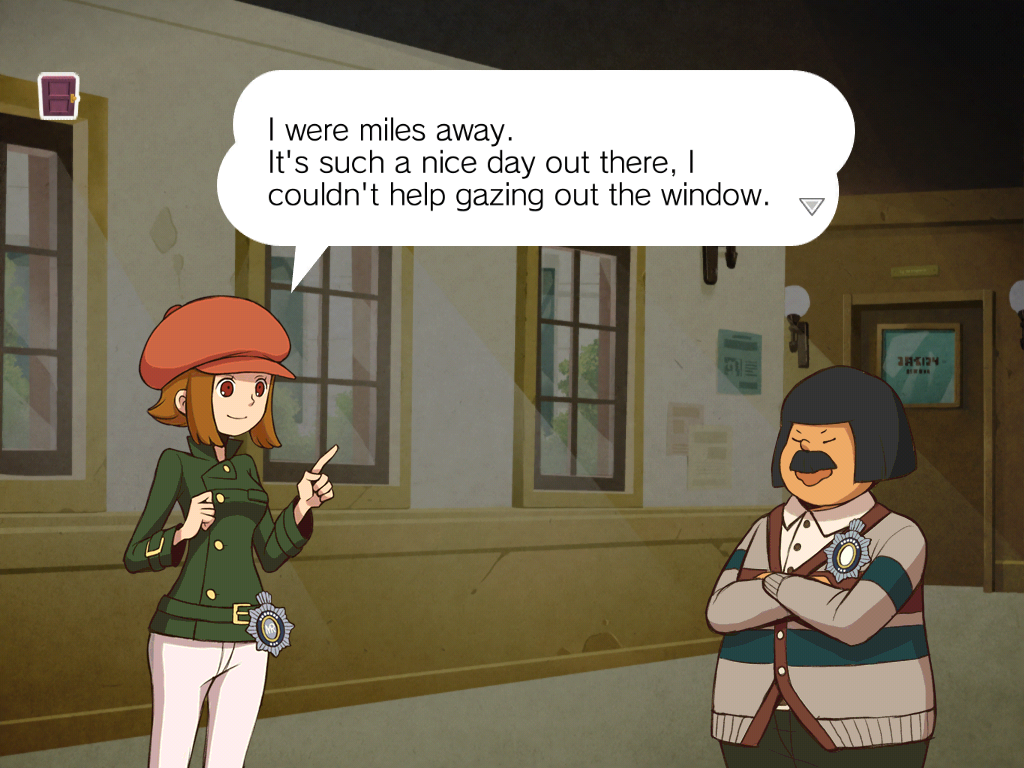 I groaned when I saw this. “I were miles away”? Someone call a proofreader!

But it turns out it were done on purpose. Lucy has a heavy Cockney accent, so all of her dialogue is littered with slang, missing letters and faulty grammar. I’m not sure why this is the case. Perhaps they were trying to give the game some British flavour. Perhaps Level-5 was lazy and only translated the game into European English, without an American localization. Either way, I’d argue that it’s a bad idea to give a narrator (and 40% of the cast) a heavy accent.

To demonstrate this, let me give an excerpt from the book which eventually became Splash Mountain. This is the scene which occurs at the top of the famous Disneyland ride.

“Skin me, Brer Fox,” sez Brer Rabbit, sezee, “snatch out my eyeballs, t’ar out my years by de roots, en cut off my legs,” sezee, “but do please, Brer Fox, don’t fling me in dat brier-patch,” sezee.

Lucy’s accent is nowhere near as heavy as that, but it’s still an unnecessary hurdle to overcome. 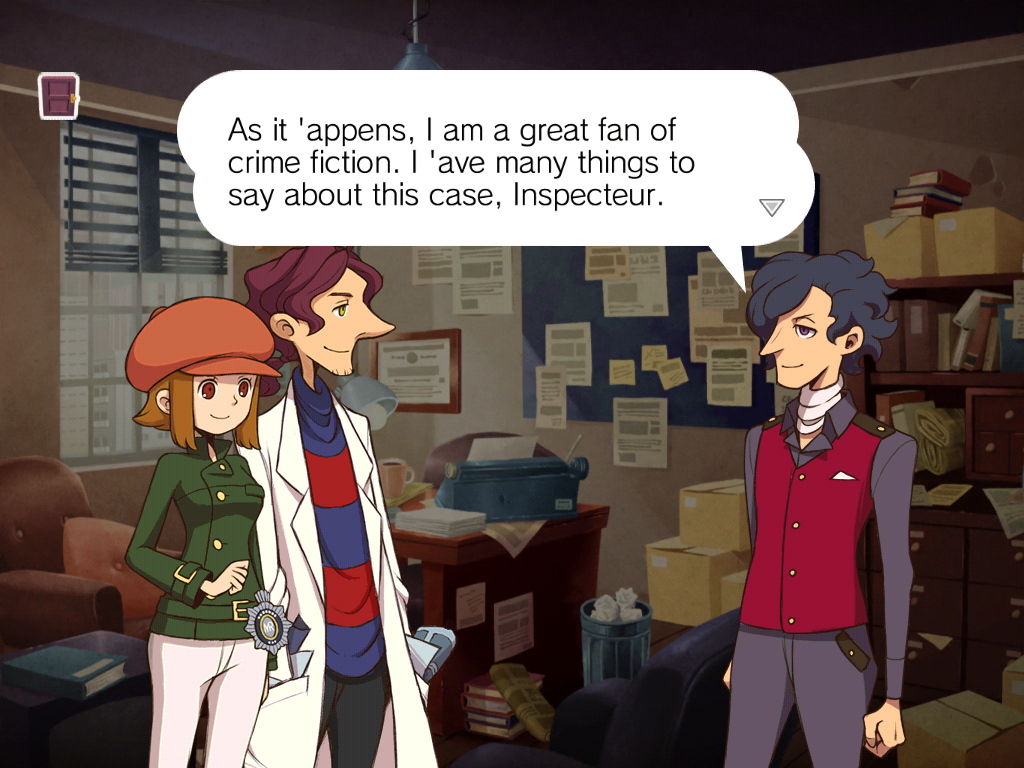 The  game features multiple accents and no voice acting.

It is very obvious that Layton Brothers: Mystery Room was not designed to be part of the Professor Layton series. The game tries to justify the license by saying that the main character is Professor Layton‘s son. In the future. When he has sons.

That’s the game’s excuse for not having any Professor Layton characters, except for Barton. It’s the future. This is explained, in about one sentence, at the end of the game.  Up until that point, I was convinced that Alfendi is the son of some random dude who coincidentally was named Hershel Layton. In fact, that is still a distinct possibility, because the game goes into zero detail about the topic.

Alfendi might not look or act like the Professor we all know and love, but you can easily pretend his sidekick is Luke, after undergoing a sex change operation. She’s got the hat, the cockney accent, and she’s constantly impressed by simple things. She calls Alfendi “The Professor”, in order to make this game seem like a legit Layton game, but no one has been fooled by this trick.

As for the brother in Layton Brothers, he does not exist or get mentioned at all. I’m pretty sure Alfendi is an only child.

The game plays around with the idea that Lucy and Alfendi should be a romantic couple. Characters ask pointed questions, there are heated denials, and Alfendi’s beautiful ex-girlfriend shows up for a bit. Ultimately, the romantic subplot goes absolutely nowhere. Lucy never decides if she likes Alfendi, and he never realizes that he’s caught her interest. Apparently, for a genius detective, Alfendi is quite clueless.

Personally, I question Lucy’s skills as a detective. During the second case, it is revealed that Alfendi has an alternate personality.  Alternate Al is quite nasty; he likes to talk about blood and demons and how fantastic murder is. Lucy just shrugs this off as a minor personality quirk. Seriously, Lucy? The dude turns evil, and you don’t bat an eye? You’ve got problems, Lucy. 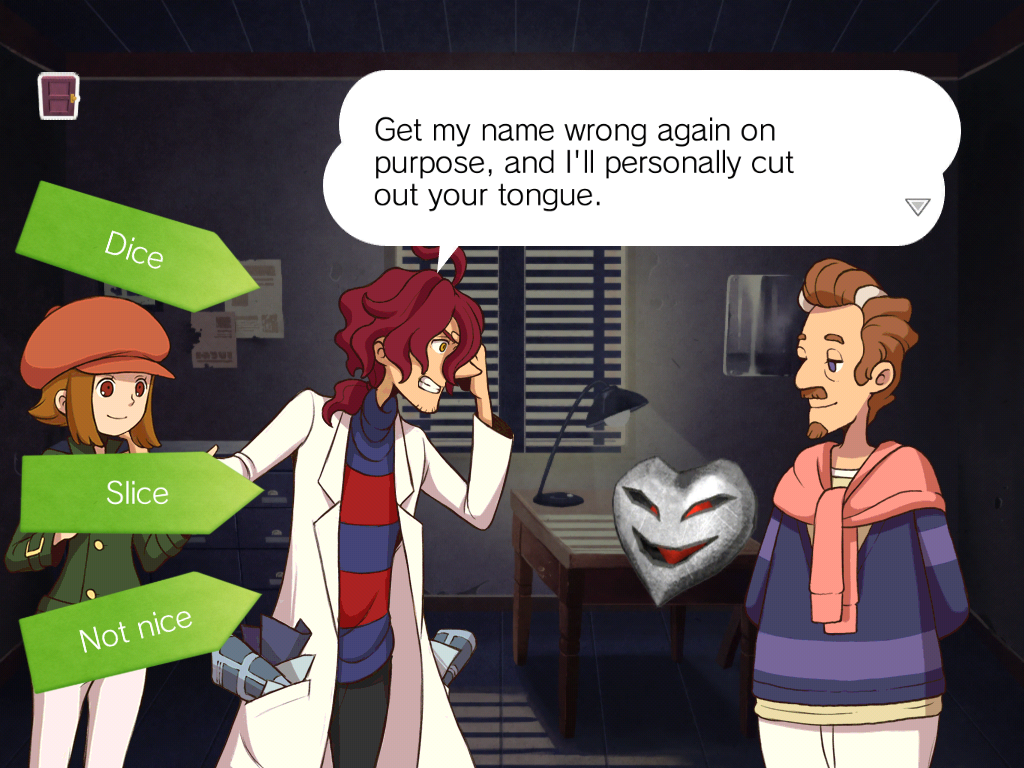 This game contains nine different cases that our detective friends most solve. Most of them are murder mysteries, and all of the cases are unrelated, until you reach the final third of the game, where an overarching storyline about a serial killer appears. Once our heroes get a case, they investigate the crime scene and make deductions about what happened. After this, they confront the killer with evidence until the killer confesses.

As many people have pointed out, the game plays like Phoenix Wright, except there’s no witness testimony.

Before you begin an investigation, Alfendi will tell you who the culprit is. This is a feature I greatly dislike. Knowing the culprit’s identity before you even start to investigate takes most of the fun out of solving the mystery yourself. Fortunately, this feature disappears halfway through the game, but it still seems like a weird thing to include in a mystery game.

The main complaint I’ve heard about this game is that it’s too easy. That’s a valid complaint, seeing as it’s impossible to lose the game, and seeing that the game tells you whodunnit ahead of time. I would add that confronting the criminals is also too easy. Most of time, all you do is rehash the information that you found while investigating. Make me do more than select the same pieces of evidence, twice in a row!

Also, I should note that arrows automatically fly across the screen during confrontations. I have no idea why, and it’s a rather odd mechanic. Diane is the secondary villain of this game, but she’s much much more interesting and well designed than the final villain.

All in all, Layton Brothers is sort of a mixed bag. The mysteries are good, but the quality is a bit obscured by impenetrable accents and half-repetitive confrontations. The game really hits its stride in the final half-to-third of the game, when it introduces continuity and stops telling you who the culprit is ahead of time. The difficultly level is increased at this time as well.

It’s not too bad for a $5 mystery game. If you’re a fan of Phoenix Wright or mysteries in general, I’d recommend downloading this game and playing the first two cases (which are free) to get a feel for it.