… To boldly go where no GameCola review has gone before! Starring Mark Freedman as Captain Jean-Luc Picard. *Ahem* 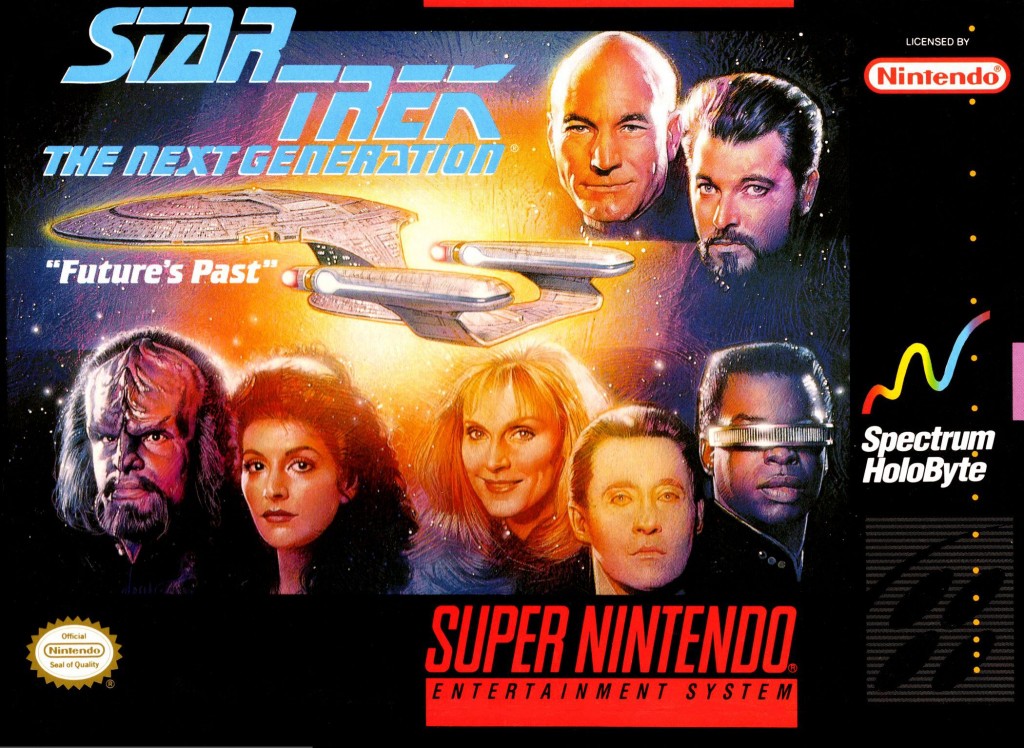 An avid trekkie, I spent many a night watching The Next Generation with my brother. It was there that I grew my fondness for beards, watching “Number One” assist Picard in treacherous scenarios each and every week. As having a beard is a requirement for all male GameCola staff writers, it’s quite possible that you wouldn’t be reading this review if it wasn’t for Jonathan Frakes in season two and beyond. Perhaps it was Star Trek‘s depiction of a positive future, free of economic woes, racism, and greed, its great stories and parallels to modern times, or the glowing dome of Patrick Stewart (not to mention the beards), The Next Generation was a great continuation of the Star Trek franchise.

When my friend told me of a Star Trek game on the SNES, my acting-ensign heart skipped a beat. You’re telling me that I can gallivant around the galaxy as Picard, Riker, Data, La Forge, and the rest? Surely it must cost a million spacebucks to play!

The game is called Future’s Past…that’s about as confusing as Street Fighter: The Movie (the game). Isn’t “Future’s Past” the present? The past of the future, I guess could be an earlier future, the present, or the past. I don’t really get it. Interestingly enough, there’s an X-Men movie coming out, Days of Future Past, also starring Patrick Stewart, and just as cryptic.

When I first went to play this game, I was floored. After a Captain’s Log entry about the Romulans being douche bags demanding to enter the Neutral Zone and not letting the Federation in and a team of scientists….ah, who cares… I’m on the bridge! The senior staff is on the bridge and I can go to all the stations! Navigation, communication, tactical, computer, and engineering stations are all at your disposal. Basically, you are running the ship, so you decide where to go, who to communicate with, what to repair, and so on. This is essentially a linear adventure game, so while there are dozens of planets to go to, you can’t beam down and go there, or talk to random people in the galaxy. There are things to do and people to see. However, if you fly around enough, you’ll encounter some random Romulans. As per the Romulan code, they’ll come out of nowhere without hailing you and just start attacking you with disruptors and torpedoes. At this point, you’ll spin around to Mr. Worf’s position at tactical. You enter a 2D grid battle system, very ambitious for its time. You’ll fly your ship around and fire forward and aft torpedoes. This means that if your front torpedo bays haven’t reloaded yet, you’ll need to fly backwards for a while to fire out of your aft bays. I could never seem to avoid enemy fire though. You can fly out of range of their phasers, but you could never dodge torpedoes. You can, however, take the brunt of the torpedo where your shields are currently at their highest strength, so there’s certainly some strategy to it.

If you hurt your opponent enough, he will hail you. To answer the hail, you have to press Y+X+A together. Why not just have this as a single button, or under a start menu? You can answer the hail and see what they have to say. Usually this means hearing the Romulans ramble on about their navigation systems not being functional and scolding you for defending yourself and almost causing an interstellar incident. You may grow tired of this and decide to just blow them away. Heh heh. The admirals won’t be too happy about that though. Be sure not to do the Hail button mash without being hailed yourself. You’ll end up surrendering the Enterprise immediately; there’s no way to back out of this. Surrendering is useless; you may as well fight your way out and go out with some Klingon honor! The top view screen shows the bow of the ship. You can actually see the torpedos going for the Romulan ship here. Way cool!

You’re going to take some damage in these space battles. You’ll need to go to the Engineering Station and have La Forge assign engineering crews to your important systems. These systems will actually impact you. If your navigation systems or engines are down, you wont’ be able to warp. If your transporters are down, you can’t beam down for away missions. You get the idea. If you’re really beaten to a pulp, get to the ship’s computers and find the nearest starbase. They’ll restore you back to 100%.

You won’t just be battling, though. The bulk of the game involves you going to different planets and solving adventure-game like puzzles and battling creatures or Romulans on the ground. This is where the game can get tedious, but perhaps it’s the fact that I never got in to adventure games in general. The first mission is pretty easy—you just blast some Romulans and find some archaeologist to the north. Nothing too fancy. What’s strange is that you answer a distress call with this woman saying there’s Romulans at her dig site and she feels uneasy. At maximum warp, you’re ten days away. What happened in those ten days? There’s no sign of her having food or shelter down there…there’s just a bunch of Romulans standing guard. What the hell? On the next mission, you’re walking around a blacked-out alien ship for no reason other than that it’s there. They have a large grid of pipes, with missing pipe segments strewn about the ship. You decide it would be good to replace the pieces in the grid, without any study of what might happen or whose ship it was. The problem is that the ship’s orbit is decaying and it might crash in to the people you’re trying to deliver medical supplies to. So, the lights are out, and it’s hard to see. If you bring La Forge or Data, they have advanced vision and can see in the dark. But Picard doesn’t mention this before you beam down. So you’d beam down, and then beam back (using Y+X+A, with no confirmation), and switch out your away-team. Doing this though resets the whole map, so it’s usually pretty pointless to do unless you give up.

A later mission has you beam down in to a mining colony to rescue some miners. They have no idea where the miners are and don’t provide the away team of a map of the damn place. What’s more, you beam down in to a room with no air! Again, Picard doesn’t tell you shit about this. There’s a switch in the room that opens up some vents so you can breathe. So, it’s pretty important to have Mr. Data here as he doesn’t require air. Still, even if Data is your leader so you can control him immediately, your other three guys will still take some damage. This is ridiculous. If you’ve watched even a few Trek episodes, you know that they don’t beam down into dangerous areas where they can’t breathe. They either beam guys out or they take environmental suits. What the hell was Picard thinking, beaming down humanoids in to a mine shaft with no air? How the hell are the miners still alive if there’s no air? You’d think with the Enterprise being the most advanced ship and having the best crew, they’d look into where they’re beaming. Also, I don’t know if Picard has you beaming down to planets with high gravity, but the crewmen walk incredibly slow. There really should be a run button.

So, there’s some importance of choosing your crew members here. The senior staff have the “command” ability which forms a conga line when touching other team members. They also have a phaser. Science- type dudes like La Forge and Data carry a tricorder to tell you advanced scientific information like “THIS IS A DOOR” and “THIS IS A MINESHAFT”. Every away mission on the show where they’re searching for lifeforms, they always immediately take out their tricorder and do nearby scans and follow it like a compass. But not here! 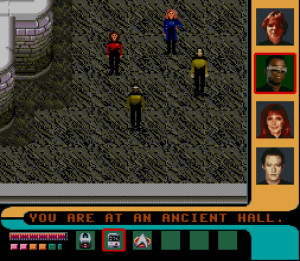 YOU ARE USING THE INTERNET.

Beyond the senior staff, there’s also a bunch of other crew members that don’t even have a phaser. They have a lot of inventory slots because of this, but they’re also kind of sitting ducks. These crewmembers are named after the game developers. Why not choose some other minor characters like Wesley Crusher, Lt. Barclay, or Chief O’Brien? What a waste. If one of your crew member’s loses all their health on a mission, they’re beamed back and brought back to life, so there’s no reason not to risk your top guys. But if three crewmen get injured, then it’s game over. If it’s Picard that gets injured, it’s game over. I guess this is why Riker insists that the Captain stay on the ship during away missions. Maintaining that shiny dome takes some effort, too.

This game was pretty ahead of its time, and has some pretty cool elements. Unfortunately a lot of the away missions are incredibly boring or difficult, so you may find yourself looking up passwords to skip over them. That’s right…password system on the SNES version, but not Genesis. I guess this is a prime example of “Sega does what Nintendon’t”. The game is a fairly accurate representation of the show, though (although, not so much in terms of away teams beaming in to areas with no breathable air).