I stepped off the train into the busy station. I had come to Japan with a small group of friends, but I was the only one interested enough in games and anime to make the small trek to this side of town. The one friend who accompanied me only came along for the cultural experience. The station seemed like a labyrinth, even after having been through a number of stations around Tokyo over the few days prior, but we followed the signs to Akihabara.

Akihabara—the Electric Town, the legendary mecca for otaku. Whether you’re into anime, manga, or videogames, this is the place for you. At least, that’s what my many years of anime-watching had taught me. While I’m not the world’s biggest fan, how could I miss the opportunity to visit such a famous location when I was only a short train ride away?

It was drizzling as I exited the station. I could see the Gundam cafe to my right, but everyone seemed to be going in the other direction. I buttoned up my coat and followed the general flow of pedestrians, where I was eventually lead to the main strip.

I was definitely in the right place. Buildings covered in anime promotions? Girls wearing maid outfits handing out fliers? Claw machines, electronics stores, arcades? Everything was as advertised. The only thing that surprised me was how small the area was. The main strip of nerd-related venues lasted maybe a quarter mile before fading out into the normal Tokyo cityscape. What it lacked in size, however, it made up for in density. 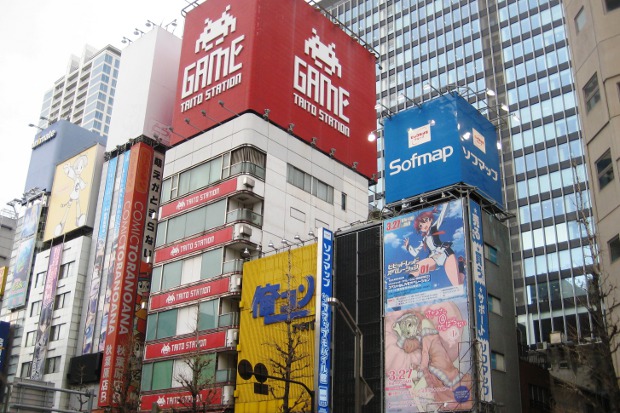 The first place I decided to stop by was Taito Station. You guys remember Taito, right? Space Invaders? Bubble Bobble? Lufia? … Huh, Magic Pengel? Really? OK, so maybe they’re more popular in Japan, but most of their games seem to be arcade games, and that’s what caught my attention during my visit to Akihabara.

The arcade is still alive in Japan. And, I don’t mean the room in the corner of the theater where you can waste a few dollars before your movie starts. In the states, the closest thing to a real arcade you’ll find in most cities has more in common with a Chuck E. Cheese than anything else—family-oriented with a few competitive arcade games alongside pool tables, air hockey, and skee ball. It’s not the kind of place you’ll meet people serious about competitive gaming. Competitive gaming is more common in PC gaming, or in small local groups that meet privately. In Japan, the dream of the ’80s still seems to be alive and well.

Taito Station was only the first arcade I went into. The ground level of most arcades was filled with claw machines, but each floor had a different selection of games. A floor of fighting games, or scrolling shooters, or puzzle games, or dance and other motion games. Seeing groups of people playing competitive puzzle games in an arcade seemed a far cry from my stateside arcade experiences, laying a sad smackdown to the few friends I could peel away from Dance Dance Revolution to come play Tekken with me. I’m not even good at Tekken.

Tired of being dragged around arcades an electronics shops, we picked up a pizza and headed back to the hotel. I had to wonder, though…would the arcade scene be different in North America if the videogame crash had never happened, or are cultural differences the reason arcades are more popular in Japan? A mystery for the ages.