To quote my review of Episode One…

I expect we’ll probably see more of Oliver’s sister and the girl that he’s arranged to marry.

Boy, was I completely wrong! Oliver’s sister remains an off-screen phone contact, and the girl he’s arranged to marry? Not mentioned at all. Yep. That plotline got dropped like a hot potato. 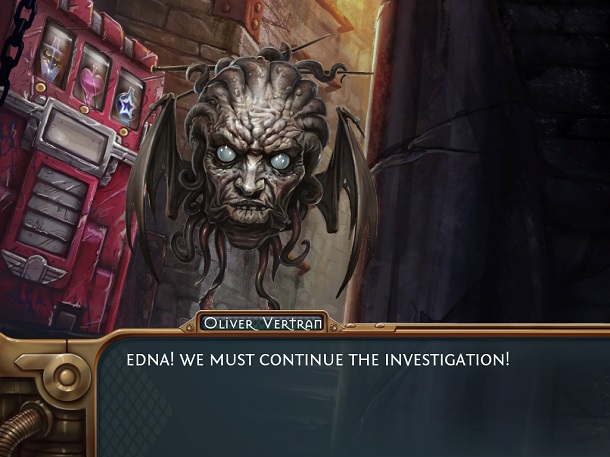 IT IS IMPORTANT TO INVESTIGATE!

Ah, but I’m getting ahead of myself. This is a review of Leviathan: The Last Day of the Decade, a Russian visual novel that takes place in a strange future. In Episode One, we met our hero, Oliver Vertrand. He has a grandmotherly pet demon named Edna, and he was adopted by the man who killed his mother.

Episode Two starts ten years later. Oliver has been secretly investigating his mother’s death this entire time, and he finally gets a lead—the ring his mother wore the night she died. The ring has magical amber and a distinctive “VF” label on the band.

Oliver goes downstairs, where he finds a jerk making fun of his crush. Oliver gets rid of the bully, then everyone goes to class. Instead of paying attention to the history lecture that serves as a confusing backstory to this world, Oliver takes a nap. That’s when…a tree…um…let me just show you. 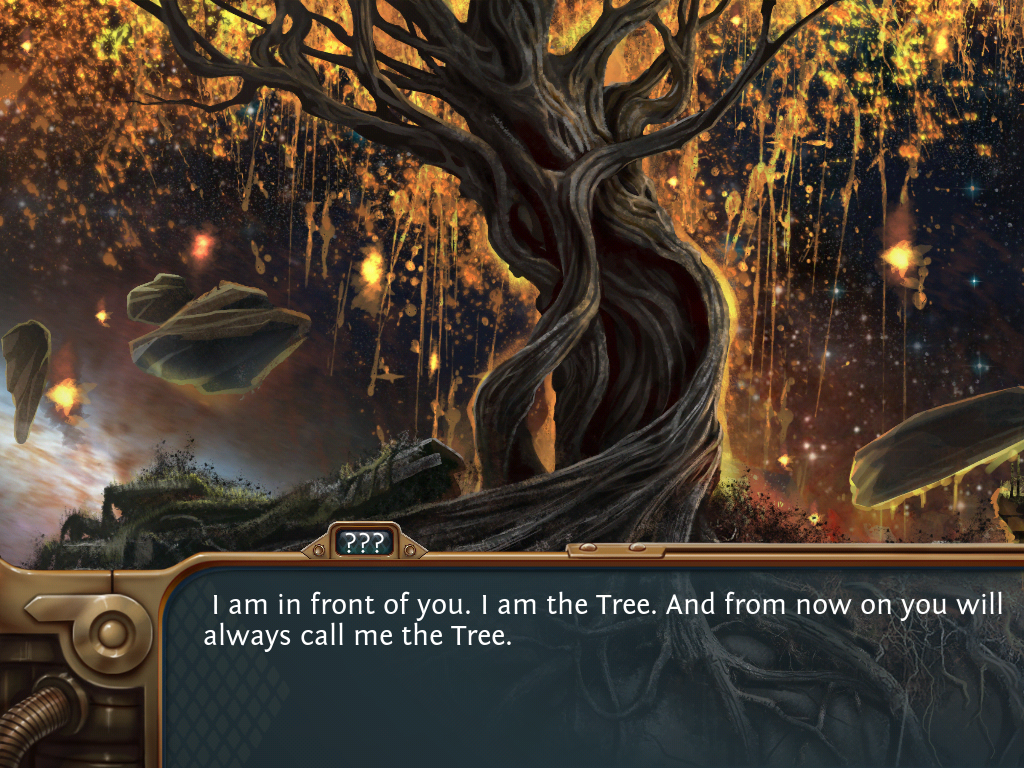 ALL HAIL THE TREE!

The magical talking tree says that it will give you an automatic game over if you kill five people with your pet demon. That’s bad news for me, because I wasn’t able to stop the demon from murdering Groth in Episode One.

After class, the bully reappears and understandably freaks out when he sees Oliver talking to a demon. The bully runs off, shouting that he will call the police and have Oliver arrested. Oliver gives chase and a fistfight ensues. I did poorly in the fight, so the demon stepped in and killed the bully for me.

Great, Oliver’s murder count is up to two. Now the magical tree is going to be furious with me.

Despite the fact that Oliver is officially a serial killer, he is still determined to find the man who killed his mother. He navigates the surprisingly large environment until he tracks down Vinfred Forlow, the jeweler. The jeweler has an amazing memory, and after a bribe, he tells all about the ring. It was purchased immediately after the murderer and Oliver’s mother visited the archives. 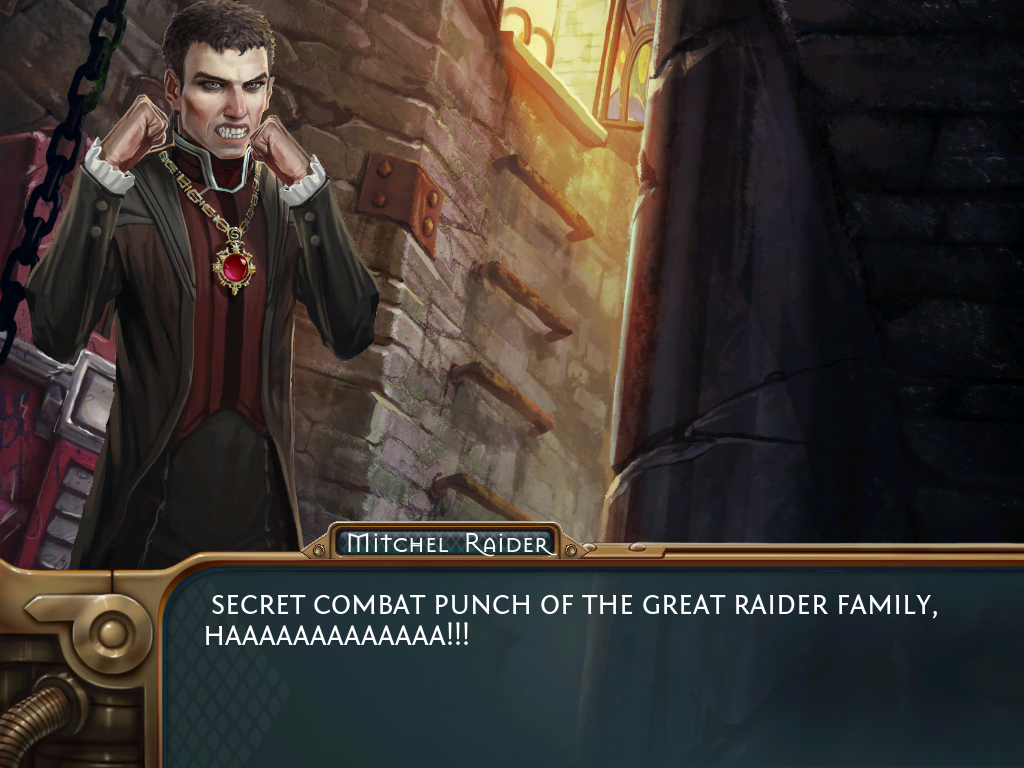 How is it a secret if you shout about it all the time?

Oliver heads to the archives, where he has to bribe another man. The files in the archives say that Oliver’s family was in huge debt, and they made a deal to sell him in exchange for cash. For unexplained reasons, the murderer accepted this deal, then broke it by killing Oliver’s mother. Crazy murderer!

Remember how the mother’s ring was made of magic amber? Magic amber is able to record live video footage, because…reasons. Oliver uses the magic amber to rewatch his mother’s death, and it turns out she was killed by a demon. The episode ends there.

Episode Two is an improvement on Episode One, in several ways. The environment here is much bigger, with more characters and puzzles. Your decisions have more of an impact and an effect on the story; to use the obvious example, there are two places where you can choose to kill someone or not. There is also more world-building, and you get more information about Leviathan, demons and the foundation of the world.

The downside is that environment and the puzzles are all optional. You can completely skip over them, and odds are that you’ll skip over the confusing world-building information. (Seriously, I still have no idea what a Leviathan is, after having it explained to me twice.) The only puzzles that you have to solve are dialogue tree puzzles and figuring out how bribery works.

So I’d say that, while adventure game elements are still here, this episode leans more on the visual novel side of things. 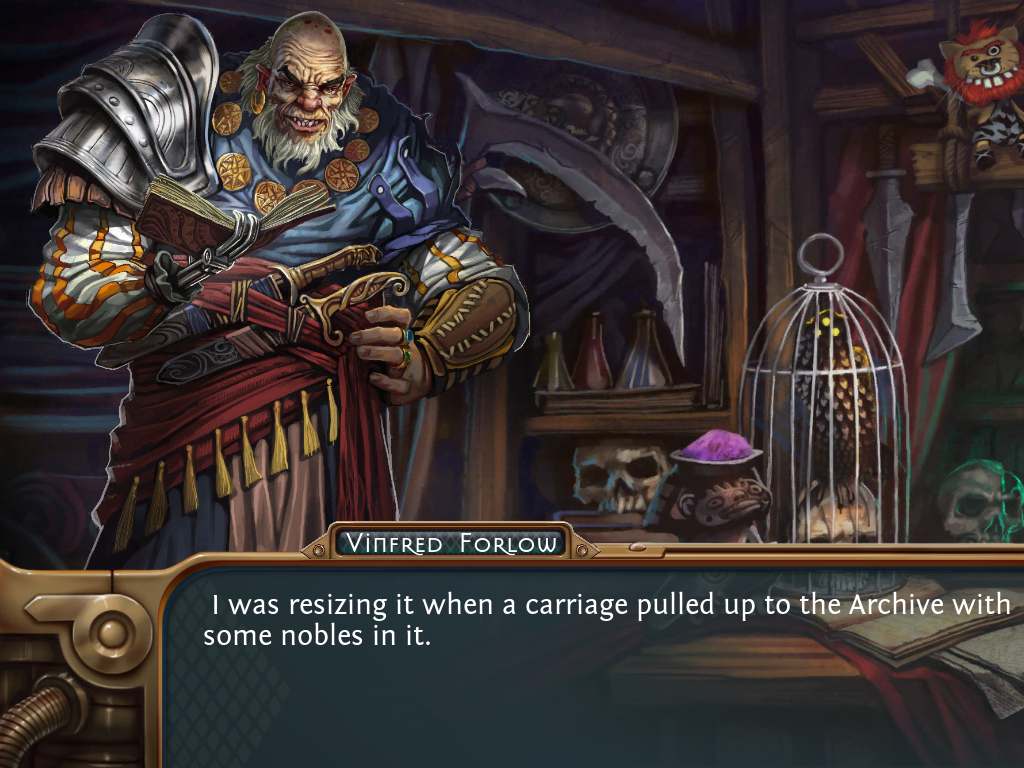 The game’s graphics are highly stylized and fantastic, with one exception. That would be the girl you have a crush on. For some reason, her face is a girl’s photograph, while her hair and (disproportionate) body are  illustrations. It’s very odd-looking, and it makes you wonder why you’re supposed to have a crush on her.

The characters are mostly forgettable, because pretty much all of them are jerks. Edna the Grandmotherly Demon still stands out as the best character, followed closely by The Tree. I want to like the main character, but it’s hard to do so because his personality is all over the place. Depending on which dialogue options you pick, he’s either a nice person, a jerk, or a weirdo, and most often he juggles between the three erratically.

I find it odd that the murderer has not appeared in the game yet. Oliver’s main motivation is “stop the evil murderer”, but we’ve never seen the murderer for ourselves. I’m going to predict that the murderer is not as bad as Oliver believes. Hey, maybe he’s not even the murderer! It’s possible that Mother was killed by an unrelated demon.

I’m going to give this episode the same score as the previous episode, even though it deserves to be bumped up a half-point for being longer and having more puzzles. The long, confusing explanations of how things work in this world, as well as the easy-to-accidentally-skip nature of the game’s best puzzle material, detract from the overall quality increase of this episode.