In the news recently, the Nintendo 3DS outsold the PlayStation 4 and the Xbox 1, making it the best-selling console of 2013. The company has announced plans to increase their large profits with a new—

I’m sorry. It appears I was reading the wrong news report. Let me try again.

In the news recently, Nintendo has cut its Wii U sales forecast from 9 million to 2.8 million. This is proof that NINTENDO IS DEAD. There is no way their company can turn a profit anymore. I repeat, NINTENDO IS NINTENDEAD. 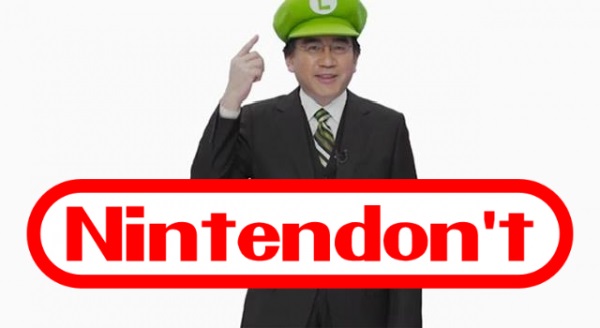 “Obviously, this is a result of Nintendo’s failure to include modern-gen graphics,” said an analyst whose ability to use Internet message boards makes him an expert in international hardware manufacturing. “The Wii U is capable of displaying 32,000 colors, while the PS4 can display 34,000. Did Nintendo seriously expect to win with such antiquated hardware? Maybe a few people would be fooled by that, but not me.”

The Internet expert went on to explain that Microsoft wins the console battle, because it has “more games where you shoot people”, which is, of course, the only genre that matters. “Oh, and football games. It has the one football game. Seriously, Microsoft is amaaazing.”

Even though Nintendo is on the ropes, some people are predicting a turnaround for the Japanese company. A time-traveling teenager who identified himself as Marty McFly said that “Nintendo is definitely going to rebound this year. When I went to 2015, there was no Microsoft game stuff anywhere. It was all Nintendo, all the time.”

The message board expert laughed at such claims.

“Nintendo is more dead than my ability to follow the stock market. Microsoft is so NOT DEAD that the only way it could fail is if a new, better system was released. A system capable of better graphics than a PS4 or an XB1? Impossible! It’d have to have the graphics capability of a low-end PC, which just can’t be done!”

WELCOME, adoring fans, to the first (and only) (and GREATEST) issue of Stowaway Lizo's SUPER TOES!!  This month finds Captain Eric with a bit more on his plate than he would have preferred, and thus